I’ve been doing this for a long time now, almost 20 years, and I’ve learned not to become too attached to individual recruits. Having a man-crush on a recruit can be a heart breaker, if they decide to go somewhere else, especially if they excel at that other place.

But even after nearly two decades of watching guys come and go, there are certain recruits that I still develop a man-crush on. There are guys you see in the recruiting process, and you know they’d be great at Virginia Tech, and that they’d fit right in and have an all-conference career.

I don’t remember exactly the first time I saw Teller, but I know it was at a Virginia Tech summer camp, and I also know that Chris Coleman was with me. After the initial “who’s that guy?” conversation, Chris told me that most people thought Teller favored Virginia.

Well now, that just sounded wrong. When a fair-haired fellow with a name like, say, Alistair Wellington favors the Cavs in the recruiting process, you think, “Uh, yeah, he probably belongs there.” But when a hulking, well-proportioned dude with a steely gaze, an edge to his demeanor, and a name like Wyatt Teller favors UVa, you find yourself thinking, “That kid needs to make better choices.”

Fortunately for Wyatt Teller, and fortunately for Hokie fans, he did, selecting the Hokies over the Hoos in a close recruiting battle, the kind which actually doesn’t occur very often these days between the two in-state schools. (It seems VT is clashing with FSU and Alabama more than Virginia these days for the services of in-state recruits … but that’s a separate article.)

In his interview with Chris Horne after committing to Virginia Tech, Teller used the word “home” three times when discussing why he selected Virginia Tech. He does indeed belong in Blacksburg.

Recruiting lore is littered with the names of big-time recruits who seemed tailor-made for Blacksburg, but who flopped, so even though Teller looked like a home run when he committed to the Hokies in August of 2012, patience was required. First he had to sign in February 2013 (he did), then he had to weather a position change from DL to OL (he did),then he had to redshirt. Through it all, he had to stay healthy … he did. 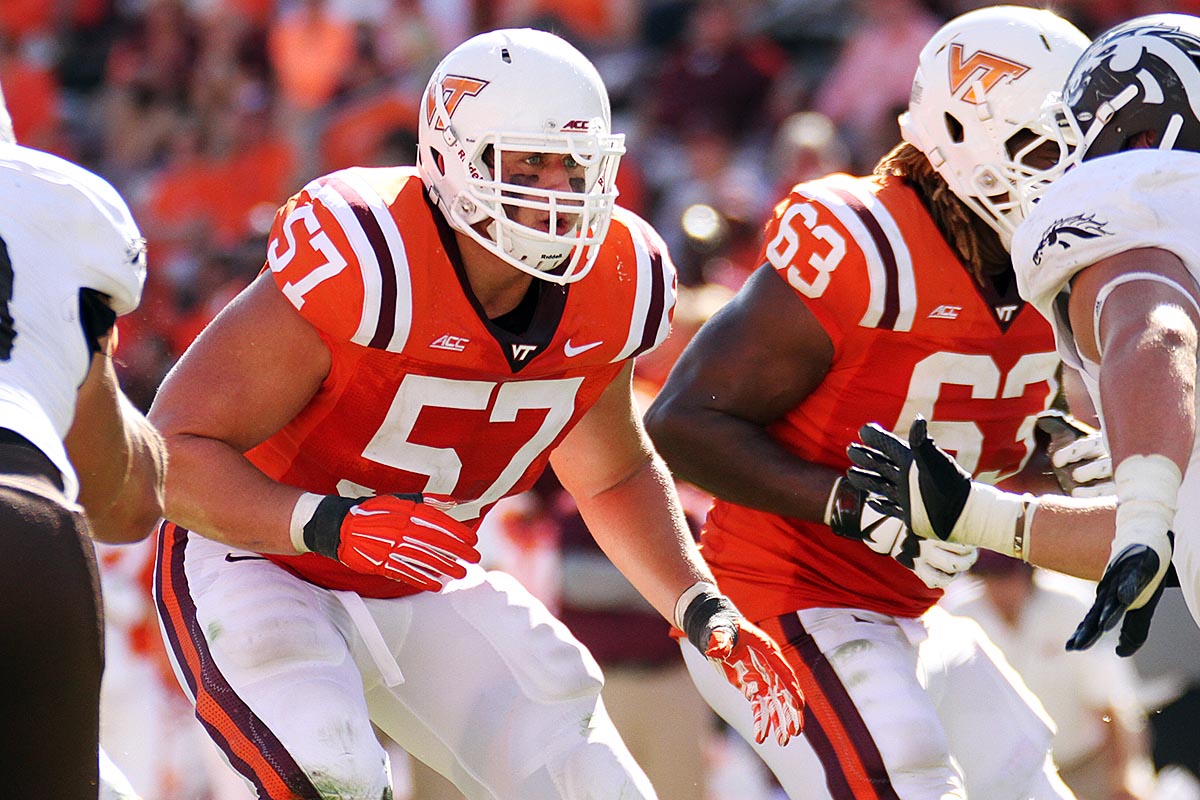 And now we’re seeing the fruits of our patience and his. We finally got to see him on the field in 2014, and he took to it better than you could have hoped. Wyatt Teller is a damn good offensive lineman, and even though it seems like he’s been here forever, he’s only going to be a redshirt-sophomore in 2015. We get to watch him for at least two more years, probably three, and he’s just starting to hit his stride as an OL.

We’re giddy with anticipation to see Teller again this fall, and we’re not the only ones. ESPN’s David M. Hale has done a Q&A with Teller, and Bleacher Report named him to their 2015 All-Breakout Team. If Teller continues to follow this trajectory, he’ll soon be on all-ACC lists, and he’ll make some All-American lists, and then he’ll make some NFL Draft lists.

Teller has the gift of on-field nastiness. It’s an offensive lineman’s best friend, and you see it in the way that he doesn’t just pancake people; he knocks them down, then falls hard on them to make sure they stay down.

When Teller gets out into space, there’s no wandering around, looking to get in someone’s way. He picks a target and nails it. Sounds simple, but it’s a skill not displayed by many Virginia Tech offensive linemen in recent years.

As he has grown more comfortable on the field, Teller has started to let it all hang out off the field as well, going full mullet. You don’t sport a ‘do like this unless you’re secure in your manhood, and the knowledge that you could crush anyone foolish enough to chuckle at it.

I post this to show you Wyatt Teller's mullet and the scuff marks on his helmet. #Hokies pic.twitter.com/sxvBC1uRQh