Note: The infographics are by OXVT, and the text is by Chris Coleman.

It’s been far too long since we featured some of OXVT’s wonderful infographics.  Today we’ll take a look at preseason predictions and how the Hokies have (or haven’t) met those expectations through the years.

Summer officially began a few days back, which means newsstands are being flooded with preseason College Football magazines. If you’re like me, you used to buy those magazines religiously to see where the Hokies were picked each year. It was a big deal, and we all just knew that Tech would finish higher than any of the magazines predicted.

Indeed, that was the case throughout the 1990s, as this graphic by OXVT shows.  Click for a larger image. 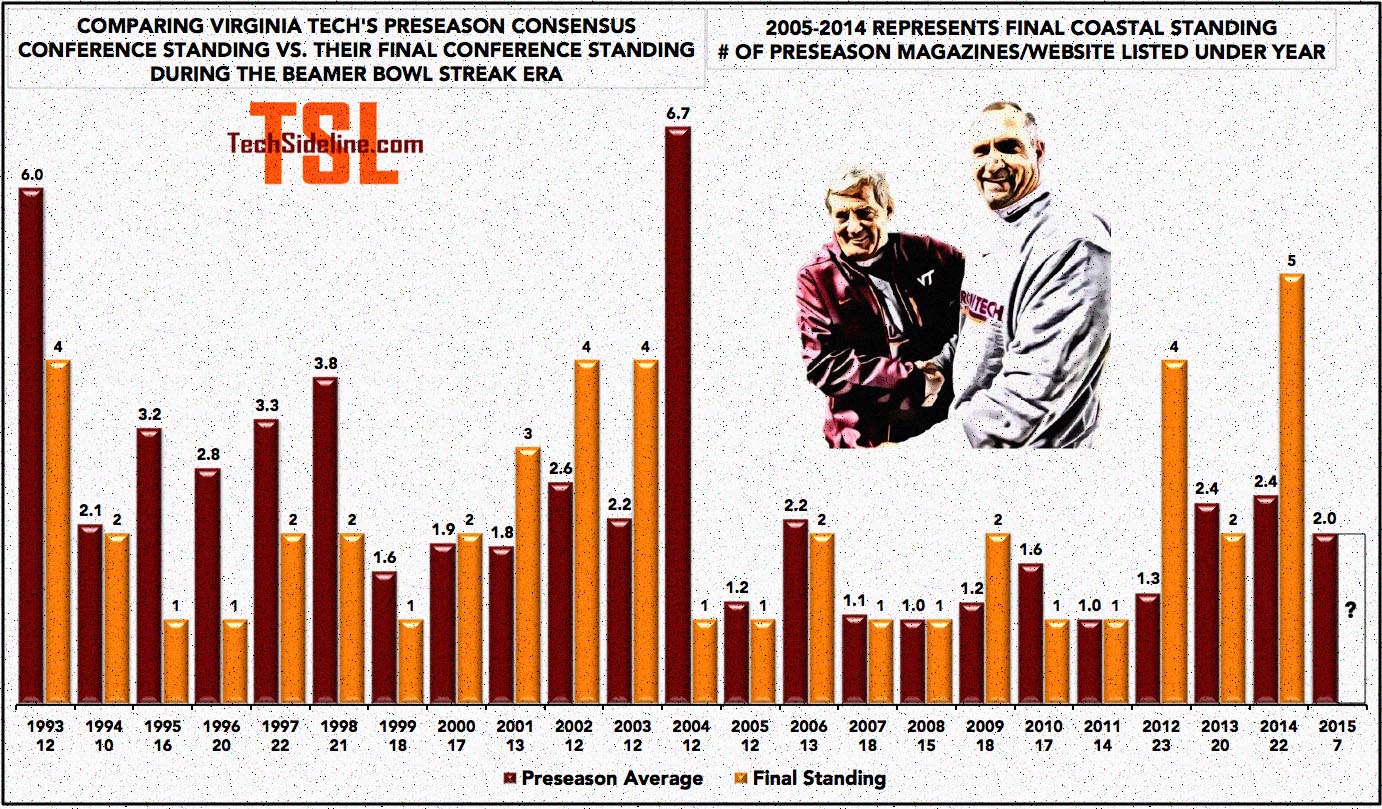 For the first few years of the Beamer Bowl Era, it was understandable. However, in the latter years of the 90s, the prognosticators got into the habit of overrating Miami and underrating Virginia Tech. In fact, the Hokies finished higher than they were projected every single season from 1993 through 1999.

It was in that era when the Hokies developed the reputation of being a team with a chip on their shoulders. Unfortunately, their success in that era led to expectations increasing over the next few years, and they couldn’t match those expectations. From 2000 through 2003, the Tech finished lower than predicted every single year.

Those mediocre finishes made the 2004 run even more surprising. The Hokies were thought to be a middle of the pack team, and their average preseason prediction was 6.7. Everyone assumed that going from the Big East to the ACC was going to be difficult. Instead, Tech won the ACC and represented the league in the Sugar Bowl.

That set off a run of seven consecutive seasons in which the Hokies lived up to expectations in the Coastal Division. From 2005 through 2011, Tech finished at or around where they were expected to finish.

Though the Coastal Division wasn’t the strongest division in college football throughout those seasons, Virginia Tech did an outstanding job of living up to expectations.

The Hokies have not lived up to expectations over the last three years, though it’s easy to argue that those expectations were based on past results rather than the actual talent level on the roster.

So far seven publications have been released in 2015, and the average prediction for Virginia Tech this summer is second in the Coastal Division. Can they exceed expectations, or will they continue the recent trend of finishing lower than predicted? The schedule is favorable, particularly with Georgia Tech playing both Clemson and Florida State. If the Hokies can stay healthy, they should be able to factor into the Coastal Division race.

And now, for some bonus infographics.  You can click each of them for a larger image.

Virginia Tech has been to 22 consecutive bowl games.  That’s the longest NCAA recognized streak in the country.

Believe it or not, the Hokies also rank #4 in the computer rankings since 1993.  They trail only Ohio State, Florida State and Florida.