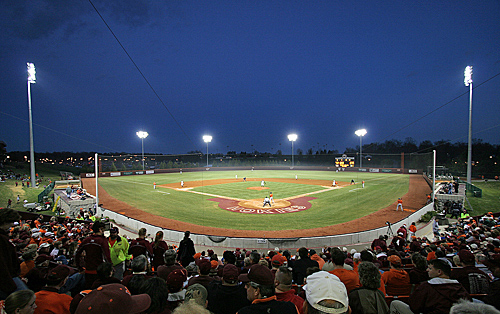 Editor’s note: This will be Jacob Emert’s final series for TSL. He graduated from Virginia Tech in May, and is now covering the Washington Nationals for MLB.com. If you’re a Nats fan, follow him on Twitter at @JacobEmert.  Tomorrow we’ll run the final part of this series.

Before Virginia Tech’s 2015 season came to an end, I sat down for the better part of 40 minutes with pitching coach and recruiting coordinator Rob Woodard. We discussed several topics surrounding recruiting in college baseball.

It’s very long, but that’s because it contains a lot of good information. Read through it all now, or keep the tab open and come back to it throughout the day, but don’t miss it.

Some answers have been edited for clarity.

(Jacob Emert): What’s the recruiting process like from day 1? How does it generally get started?

(Rob Woodard): Kind of the player reaching out to us, so for the most part, up until September 1st of a player’s junior year of high school, all the communication has to come from a player and their family. We can’t email him, we can’t text him, we can’t call him, so basically we’ve got to communicate with their coaches and you know, that way the coach can communicate and say, ‘Hey, I would give coach Woodard, give Coach Connolly, give Coach Mason a call.’

We’re just kind of building a relationship that way, but we always want to get a guy on campus as soon as possible. That’s kind of step one. Get a guy on campus as soon as possible. Let him see the campus, let him see the facilities, let him get comfortable with our coaching staff, let us try and get to know him. Really try to build a face-to-face relationship as early as possible. That way, when we continue, because we want to see players as often as possible, we always want to try to have a sense of player’s personality, his family, his background. That way after seeing him one or two times, if we see him play well, we see him struggle, we have a sense of his makeup and that sort of thing. So that’s sort of step one, get a player on campus and get a sense of them and their family, and let them get a feel for us, and like I said we’ll just stay in touch, communication.

Processes can go fast, they can go slow, it just depends on kind of our needs and where the player and his family are, and our evaluation of him are whether he is an elite prospect versus a potentially elite process versus a follow, where he is not there yet but you can easily see him becoming a guy for us. But we’re never going to stop recruiting. We’re not just going to recruit the guys who we think are good for us now.

(JE): How do you know when to offer a guy or when to cross him off your list?

(RW): With recruiting being so early now, you really can’t rule out a guy until you’ve seen him so many times that, ‘OK, he’s not going to be for us.’ Because often times, if you’ve ever played baseball you know there was that kid who crushed home runs when he was 12 in little league and threw 75 miles per hour, and then you look up in high school and college and he’s not the best player. And that’s kind of how it is now, except you can kind of get a sense of the elite players as a freshman and sophomore, but there is a lot of time before they show up on the college campus. And it’s a big jump obviously going from high school to the ACC, so just because a player is elite as a freshmen or a sophomore, doesn’t mean that player who isn’t quite good enough yet as a freshman or sophomore isn’t going to be the best player when it’s all said and done.

So, it’s not uncommon at all really for the last commitment of a class to be one of your better, more impact guys because you’re getting a closer look at him before he gets to school. You have a sense of your recruiting class in terms of ‘hey, this guy is better than what we’ve had.’ We might have had a pitcher committed for a year and a half, and he’s a good pitcher, but then we’re sitting there in the fall of their senior year and this kid comes out of nowhere and it’s like hey, he’s better than the kids we have committed. We need to get this kid. That happens all the time. So we’re never done recruiting.

Stuff’s constantly shaking out because of early recruiting. On our end we try to slow it down as much as possible. We don’t look at is as, ‘OK, lets get as many elite guys locked up as quick as possible and be done with it and moved on to the next class.’ We try to keep the elite players that we’re recruiting from committing as long as possible, just because you see it all the time. An elite player as a sophomore might peak, he might lose that chip on his shoulder or work ethic to where he commits as a sophomore and then you look up and… so we try to slow it down as much as we can.

(JE): When do you know it’s the right time to offer a guy a scholarship?

(RW): It just varies from guy to guy. It varies because some players are anxious to make a decision. So if we think he’s good enough, we will say ‘OK, it’s time to go.’ Or it might be we think a player is really talented and fits our needs well, and maybe other schools don’t know about him yet and we think it’s a good time to pull the trigger before the player becomes more expensive [I.E. offering more scholarship money], or the process is going to be drawn out longer because he wants to take other visits. It just really depends on the kid, and that just takes a lot of communication from our staff with their family and that sort of thing.

Really, once we offer a player we pretty much know if he’s going to commit within 48 or 72 hours, or if it is going to come down to us and one or two other schools and he’s going to make a decision. Very rarely, since I’ve been here or even before I’ve gotten here, will we have an offer out to a kid and it will stay out for 1 or 2 or 3 months. For us, there is no reason to do that because that kind of ties up money. Usually those guys aren’t anxious to be Hokies, and we want talented players who are anxious to come to Virginia Tech. So for us it sends a message when a scholarship is out there for a long time that maybe he’s interested in other things and that kind of thing, maybe using us as leverage. And that’s fine, it’s never personal and each family can do what they want, but that’s just the nature of it. And that’s pretty much true for most programs as well. If you take time to build a relationship with a player and you make an offer and it sits out there forever, you kind of have a sense that the player is looking at other options.

(RW): It varies from school to school, but here at Virginia Tech we’re working off an 11.7 scholarship. An instate scholarship totals about $20,000 and out of state is about 37,000. So, whether you’re working off a percentage or a dollar amount, we could offer 11.7 out of state guys, but when you’re offering 40 percent out of state, the likelihood of a family of a really good player coming from out of state for 25 percent when he could go to his in-state school for 50, 60 percent and pay less, it’s just not likely. Every July 1, the roster gets reset in terms of the 11.7, so there comes some years when we have more money available based on turnover, based on draft, based on transfer, whatever. Every year is a little bit different.

For the most part, we’re going to work off 11.7. There are other programs out there that have more need-based financial aid that they can supplement in terms of a family filling out a FASFA form, and basically certain schools that are out there, I’m not going to name any, but you can look at the top 10-15 schools in the rankings, and those schools, the families can fill out a federal aid form and qualify for 55, 60, 75, 80 percent need based money from the institution. Then that baseball program can add that on to their 11.7 and those players won’t count on a roster.

Supplemental financial aid varies from school to school and it’s kind of the loophole in financial aid and college baseball. It is what it is. Everyone kind of in our profession knows it. That’s one of the first things when guys out there are looking at taking a head coaching job, when a certain school opens up, one of the first things they want to know is ‘what are my options for supplemental aid to add to my 11.7.’ And if there isn’t some, that’s going to be a challenge. There is a certain school down south that I know of, that if a player comes from a state that doesn’t offer marine biology in his state school, then he can qualify for in-state tuition. So basically this school in the state of South Carolina, you can look at their roster and it will be like, ‘Why do they have players from West Virginia and Ohio?’ Well, basically it’s because they are offering 40 percent scholarships to out-of-state players and they’re working off that $20,000 a year 40 percent (the in-state rate) instead of working off that $36,000 (the out of state rate). So it’s much more appealing for players in those states to go to this school.

We are what we are. We don’t have a whole lot of that to work off here, which is fine. And we’re not the only one. There are other schools in the ACC that don’t have that to work off of. I think it’s one of those things that you look at wins and losses and talent and rosters, and sometimes the general public looks at teams that are more talented and they look at and say, ‘That coaching staff, that support staff, those trainers, their strength coaches, that school they must work harder, they must do it better.’ When in fact, it’s not quite a level playing field. Which it’s fine, that’s life. I just think it’s one of those things. And every school has hurdles and obstacles. It’s just that to recruit at a high level at any program you need to know your obstacles, your hurdles, your strengths and weaknesses. For us, our strengths are player development and facilities and playing in the ACC and rapport with players and our coaching staff, and our support staff with our athletic training and strength and conditioning. So those are all the strengths that players get when they come to Virginia Tech, but in terms of supplemental aid, that’s not something yet that is a strength for us.