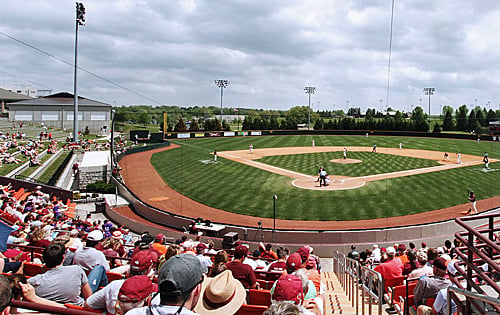 The Hokies clinched that series win with a 6-3 victory at English Field and moved into sole possession of 10th place in the ACC.  They’ll go for the sweep on Sunday.

Sean Keselica hasn’t been the same, dominant pitcher since experiencing a dead arm in mid April.

Again Saturday, by his own admission, he wasn’t as effective as he has been in the past, but showed determination in fighting through it and earning his first win since March 27.

“I just didn’t have my stuff today,” the senior lefty said. “A little bit wild, command was off. Just give my team a chance to win, battle through those tough inning when runners are on. Kind of limit the damage.”

Keselica was granted a four-run lead in the first inning and never lost it, earning his career best 5th win of the year.

He scattered nine hits over his seven innings and walked four, which tied a season high.

“He was laboring all day, although he had his best fastball in terms of velocity,” head coach Pat Mason said. “It was coming out of his hands very firm with good life to it. Sometimes, a pitcher feels too good. And I don’t know if that was the case, but Sean is most effective at the 85-88 range. That’s when he’s hitting his spots.

“Today he was mostly 87-90 and sometimes you struggle to harness that in, but he did when he needed to,” Mason said. “It goes to show how good his stuff is that as much opportunity they had to score Sean shut them down when he needed to.”

Unlike the other four seniors that will celebrate Senior Day Sunday, Erik Payne hasn’t been in Blacksburg since signing out of high school. Payne transferred to Tech after spending three years at South Carolina, but has spent his final season of eligibility wreaking havoc for the Hokies.

“It means a lot,” said Payne. “I appreciate the staff here giving me an opportunity to play and win a spot. It’s nice to be out here every day of my last year in college.”

Three of Tech’s first four hitters reached safely in the top of the first, bringing Payne to the plate with the bases loaded.

“He started me off with two sliders and then he threw a fastball,” Payne said. “I got my barrel on it and the wind was going out, so that helped some.”

Payne’s grand slam to straightaway centerfield was his sixth homer of the year and the Hokies first grand slam in conference play since April 2011.

“It’s big to have another bat in our lineup,” Mason said. “We lacked that a little bit last year with another home run threat. Put on top of it that he’s a veteran who has played a lot of baseball and has good presence, it’s been huge for us.”

Payne’s long ball served as Tech’s only offense for the first seven innings, but Keselica’s work on the mound made sure it held up as enough.

In the bottom of the eighth inning with two outs and two runners on, Max Ponzurick, who won’t celebrate his senior day for three more years, extended Tech’s lead to 6-3.

Ponzurick smoked a single back up the box, plating Brendon Hayden and Alex Perez, providing Tech with insurance runs headed into the final frame.

Saturday’s game was one of the strangest at English Field all season. In the top of the first inning, two Boston College Eagles tried to occupy third base at the same time, and both ended up being called out.

It was the first of two plays that led to Eagles being doubled off of third base. It also led to the first of several arguments between both head coaches and all three umpires throughout the day.

The final coaching argument came from Pat Mason in the bottom of the eighth and ended with him being ejected for the first time in his career.

Chris Shaw, Boston College’s best hitter and a strong prospect for June’s MLB Draft, came off the bench for the second-straight day. His second at-bat Saturday came with a runner on first in a one-run game, and Shaw seemed to have grounded out to end the inning.

Third base umpire Gregory Street called a balk on pitcher Luke Scherzer, claiming the sophomore never came to a set before delivering the pitch.

Mason was infuriated with the call and was ejected from the game after a relatively short but spirited conversation. It was at least the second time during Saturday’s contest that Mason left the dugout to argue a call with umpires.

After the balk moved Donovan Casey to second base, Shaw was intentionally walked to the vacant first base. Both runners advanced to scoring position on a passed ball, but Scherzer got out of it by striking out BC’s leadoff hitter, Jake Palomaki, to end the away half of the eighth.

Postgame, Mason declined to answer questions regarding the balk or his ejection.

Winners of three straight ACC games and five games overall, the Hokies sit at 11-14 in the ACC. They are currently 10th in the league, with the top 10 teams making the tournament.

Tech holds the tiebreaker over Virginia (10-14), which is off this weekend. After tomorrow’s series finale, the Hokies are off until May 14 at Pittsburgh, increasing the importance of every win they can get now.

“Take the word sweep, take winning the series, take that all out of it,” Mason said. “We have to win each game that’s in front of us. So tomorrow we’re not trying to sweep anyone. We’re just trying to win the game at hand.”