The Hokies revealed their 2015 Spring Football award winners during half time of Saturday’s game, and there are some intriguing and encouraging names on the list.

Let’s take a look at the offensive award winners first. 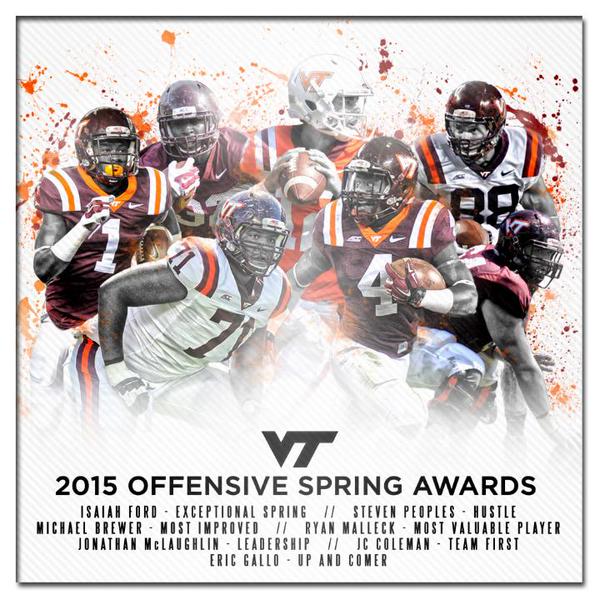 Exceptional Spring: Isaiah Ford. As good as Ford and his fellow freshman wide receiver, Cam Phillips, were in 2014, their improvement is critical to the 2015 season. Blocking was a point of emphasis this spring under new WR coach Zohn Burden, and Ford was much improved in that area.

Hustle: Steven Peoples. Peoples, a recruited walk-on from Galax who set a VHSL record with 502 rushing yards in a game, is a local favorite determined to make a name for himself. The coaches took a good, close look at him this spring, and he acquitted himself well.

Most Improved: Michael Brewer. Brewer stepped into the starting role last August after just a few weeks on campus. His improvement, most notably cutting down on turnovers, is a big key to the 2015 season. It’s a great sign that Brewer was named most improved.

Most Valuable Player: Ryan Malleck. Bucky Hodges gets all the attention at the tight end spot, but Malleck is the most versatile of Tech’s tight ends, with skills as both a receiver and a blocker. Scot Loffler prizes the tight ends in his offense, so it’s no surprise that the rising redshirt-senior is deemed MVP by the staff.

Leadership: Jonathan McLaughlin. McLaughlin mans the all-important left tackle spot and is one of the anchors of a much-improved starting offensive line. McLaughlin trivia: he had perfect attendance in grades 1-12.

Team First: J.C. Coleman. It’s almost as if the award was created for JCC, because it describes him perfectly. One of Tech’s best teammates and recruiters, he is highly regarded by players, coaches, and fans alike.

Up and Comer: Eric Gallo. Gallo’s emergence at the center spot is a big reason that commentary on the offensive line has been so optimistic this spring. Gallo can elevate Tech’s ability to keep D-lineman from coming right up the middle on the smallish Michael Brewer, and that will greatly improve Brewer’s accuracy and decision-making.

Next, the defensive award winners. 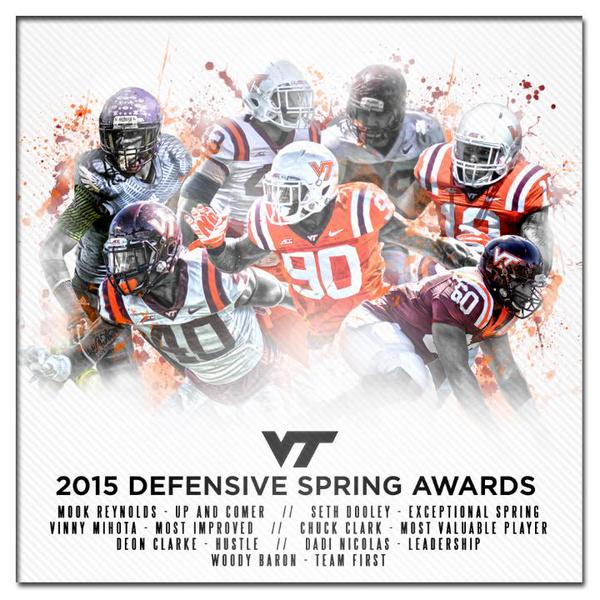 Exceptional Spring: Seth Dooley. Defensive end depth is critical for the Hokies, and Dooley’s emergence and improved play (he could just as easily had gotten most improved) looms big for the Hokies.

Hustle: Deon Clarke. Entering his second year as a starter, Clarke is setting a good senior example for younger players to emulate.

Most Improved: Vinny Mihota. Mihota entered the spring as a backup nose tackle, but by the end of the spring, the coaches, impressed with his progress and his burst off the line, were considering him at defensive end as well.

Most Valuable Player: Chuck Clark. Clark had a lockdown spring at cornerback, drawing everyone’s attention. Kendall Fuller gets all the attention, but Clark is a strong corner in his own right and is even versatile enough to play safety.

Leadership: Dadi Nicolas. Nicolas always plays hard and sets the example. He has also improved in another important leadership area: dealing with the press. As a rising redshirt-senior, he’s hitting his stride.

Team First: Woody Baron. Baron is part of a large, impressive group of defensive tackles who are important to Tech’s defensive success. He has two years left in the program and they should be productive.

Up and Comer: Mook Reynolds. DBU. Mook is next up. That is all.