This year’s big winner among Power 5 conferences in money earned from the NCAA Tournament is the ACC. The conference will make about $35 million in the next six years for their performance in this year’s tournament.

The NCAA distributes money to conferences based on how their teams perform in the NCAA Tournament over a six-year rolling period. In any given year, the NCAA pays a conference an amount of money known as an “NCAA Tournament Unit” for each game the teams from a conference play in the tournament in the most recent six years. (Championship games are excluded.)

This year, the value of an NCAA Tournament unit is $260,525, per this Forbes article by Chris Smith. So, for example, if ACC teams have played a total of 89 games in the last six NCAA tournaments (a made-up number, so no criticism in the comments field, please), the conference will receive a check for 89 x $260,525, or about $23.2 million.

This year, teams from the ACC played in a total of 21 tournament-unit eligible games. For the next six years, the NCAA will pay the ACC 21 times the value of a tournament unit, for their performance in the 2015 tournament.

The value this year is $260k, but that value goes up every year. According to Chris Smith’s article linked above, a single tournament game played will be worth a total of $1.65 million to the ACC over the next six years.

The only conference to come close to the ACC in total dollars was the Big Ten, which of course sent two teams to the Final Four (Michigan State and Wisconsin). And even after you factor in the number of teams in each conference, the per-school take by the ACC exceeds every other conference.

What about performance on the court? Follow the money: the ACC didn’t have the most teams in the tournament, but it had the most wins (by far) and the best record (table copied from Wikipedia). 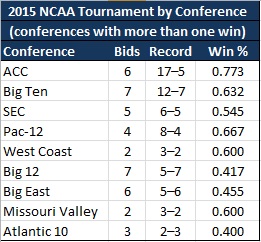 Teams in the ACC have now won four of the last seven NCAA Tournaments.

ACC teams will, of course, be strong contenders again in 2016. ESPN bracketologist Joe Lunardi has released his first bracket for 2016, and it features seven ACC teams, including two #1 seeds: Virginia and North Carolina. Other ACC teams Lunardi projects to make the tournament are Duke (2 seed), Notre Dame (5), Louisville (5), NC State (6), and Miami (7).

Comments, criticisms, and corrections are welcome, in the comments section below.