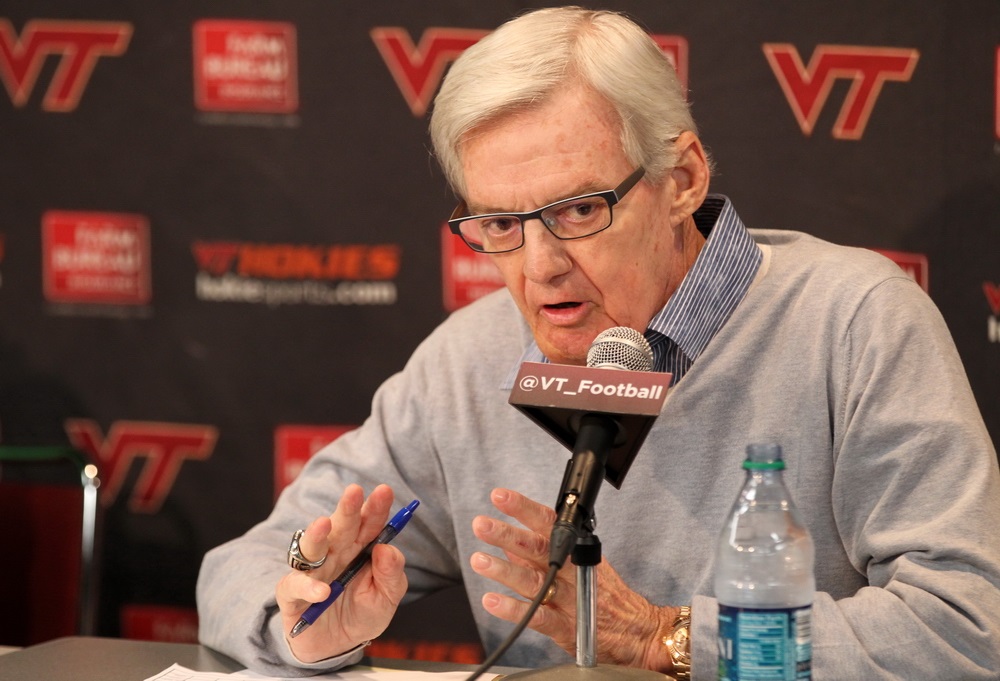 Virginia Tech opened spring practice this afternoon with a two hour workout.  There are a few notable things to discuss.

First of all, starting defensive tackle Corey Marshall has been battling an ankle problem.  He will have surgery this week and will miss spring practice.  He and fellow starter Luther Maddy are expected to make a full recovery, and both should be fine for the start of the season.

Their absence will give all the reps to their backups.  The starters for the spring will be r-junior Nigel Williams and junior Woody Baron.  Backing them up will be sophomore Ricky Walker and r-freshman Vinny Mihota.  Steve Sobczak, another r-freshman, will be the #5 defensive tackle.

The following players are no longer members of the football program: WR Carlis Parker, WR Kendrick Holland, LB Dahman McKinnon, DE Dewayne Alford, LB Josh Trimble, OL Adam Taraschke and S Zach Snell (walk-on). We knew there would be attrition when Virginia Tech signed such a large class back in February, and we can expect some more this summer after the post-spring depth chart is released and the pecking order at each position is known.

Speaking of the depth chart, here’s a link in PDF format from HokieSports.com.

There’s nothing on that depth chart that is particularly surprising.  A few notes…

At defensive end, Ken Ekanem (r-Jr.) is out for the spring.  Seth Dooley (r-So.) will take his place in the starting lineup.  Melvin Keihn (So.) and Yosuah Nijman (Fr.) are listed as the backup defensive ends right now.

After moving to backer last fall, Ronny Vandyke (r-Sr.) is back at Whip.  Holland Fisher (r-Fr.) is listed at #2.  As of now, it doesn’t look like Fisher will be a safety for the Hokies.

Donovan Riley (Sr.) will play rover this spring, and he is currently the #1 man at that position.  CJ Reavis (So.) and Desmond Frye (r-Jr.) are listed as co-starters at free safety.  Chuck Clark (Jr.) is still listed at corner, though he is expected to get plenty of work at free safety as well.  Greg Stroman (So.) is the other starting corner with Kendall Fuller and Brandon Facyson limited this spring.

Tech’s wide receiver depth is thin.  Kevin Asante (r-Sr.) is listed behind Isaiah Ford (So.) at one spot, with Demitri Knowles (r-Sr.) behind Cam Phillips (So.) at the other.

Michael Brewer (r-Sr.) and Brenden Motley (r-Jr.) are both listed at the #1 spot at quarterback, though Brewer would be the starter if the season began tomorrow.

The tailback depth chart is as expected.  JC Coleman (Sr.) and Trey Edmunds (r-Jr.) are tied at #1, with Joel Caleb (r-Jr.) and Travon McMillian (r-Fr.) tied at #2.  In reality, the tailback order right now looks like this…

Of those guys, McMillian has the chance to make the biggest move this spring.  Joel Caleb doesn’t appear to have added much weight (if any), and the coaches are very excited about McMillian.

As of now, Tech is giving Wade Hansen the chance to win the right tackle job.  True freshman Austin Clark is #3 at right tackle.

At center, Tyrell Smith is listed at #2, though it was Colt Pettit who was snapping to #2 quarterback Brenden Motley.  Right now, Smith doesn’t look big enough in the upper body to play this year.  He’ll likely need to redshirt.  Kyle Chung (r-So.) is another candidate at center, but he will miss the spring after going through shoulder surgery.

We’ll have more on spring practice tomorrow and in the coming weeks.  For now, please enjoy the two videos below.  Included are 15 minutes worth of interviews with Frank Beamer, Mike Gentry and Mike Goforth.