Perhaps it was the fashion in which it occurred more than the result itself that made Virginia Tech’s 4-0 10-inning loss to Clemson Friday night felt like such a missed opportunity for the Hokies.

After receiving eight brilliant, shutout innings from Sean Keselica, the Hokies went to trusted closer Luke Scherzer to work the ninth against the Tigers. He did so with little trouble, but after a controversial call in the bottom of the inning negated Tech’s best scoring opportunity in several innings, all came undone for Tech’s bullpen in the tenth.

Alex Perez, starting his 192nd consecutive game, appeared to have doubled in the left-center field gap to lead off the bottom of the ninth for Tech. Upon appeal, however, first base umpire David Brown called Perez out for missing first base.

Head coach Pat Mason issued a “no comment” on the matter, and told his players to do the same.

Below is a picture of the call in question. 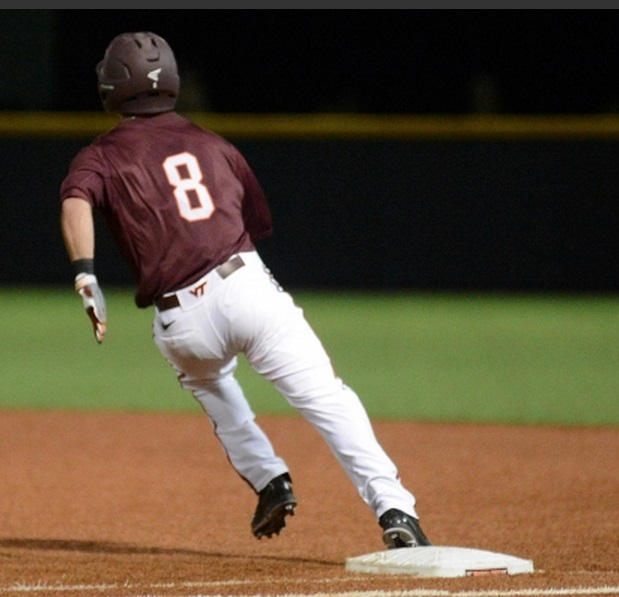 A walk-off victory that suddenly seemed so close was just as suddenly taken away.

Scherzer, who had allowed one earned run in conference play before Friday night, started off the extra frame by walking Clemson’s nine-hole hitter, Eli White. After a mound visit from pitching coach Rob Woodard, Scherzer promptly picked White off to erase the free pass. He then walked the next batter at the plate.

Mason decided to replace Scherzer with Packy Naguhton. Naughton had no more success finding the strike zone than his predecessor. He sandwiched a strikeout between two walks and loaded the bases for Clemson catcher Chris Okey.

Okey made the Hokies pay in a hurry. He parked the first pitch he saw from the Boston-native well beyond the left field wall. It was the seventh grand slam allowed by the Hokies in 22 games.

Given Scherzer’s and Naughton’s outings so far this year, the costly inaccuracy was unexpected from within Tech’s dugout.

Unfortunately for the Hokies (11-11, 4-3 ACC), the late-inning walks and grand slam largely overshadowed another stellar performance from their ace.

A week after his complete game, zero earned run outing against Virginia earned him the ACC’s Pitcher of the Week honors, Keselica struck out nine and walked three over his 111-pitch eight innings.

He struck out six of the first 10 batters he faced.

“I’ve just been getting all three pitches early,” Keselica said, speaking to what’s worked so well with him. “Working the fastball in and out, having good command with that. And I’ve been doubling up with the off-speed, keep them guessing out on their front feet.”

As impressive as Keselica was in the innings in which he was unhittable, perhaps more impressive was the way he worked himself out of jams.

After two of the first three Tigers (10-10, 2-5) reached safely in the seventh, Keselica buckled down yet again. He struck out White and then induced a chopper to Perez at second base to keep the score tied.

“He’s just keeping hitters off balance,” Mason said. He’s throwing all his pitches, executing them, throwing them with conviction and pitching himself out of jams. Just a tremendous start by him.”

Keselica has not allowed an earned run in his last 20 innings and his ERA dropped to 1.58 on the year. His record remains 3-1.

“Sean threw his heart out out there,” Perez said. “We just couldn’t get a run early. We had a situation where we had a guy on third and less than two outs and we didn’t get him in. We had a bunch of opportunities early and we just can’t count on that last inning.”

Tech’s best, earliest scoring chance came in the bottom of the second against Clemson’s Matthew Crownover.

Third baseman Erik Payne doubled to leadoff the second inning, but the Hokies couldn’t score him. The Hokies left two runners on base in the third and another in scoring position in the fourth. By night’s end, they had eight hits and two walks, but left all on base.

Crownover was in control for 8.1 innings — the last out he recorded was the Perez appeal at first — and struck out seven.

The Hokies will try to even the series at 2 p.m. tomorrow.

“We gotta come ready to play and fight for nine innings regardless (of tonight’s outcome),” Mason said.  “I’d like to think we’re going to be just as hungry for a win tomorrow whether we won tonight or we lost tonight. I guess we’ll see how mature we are, and it will be a good challenge to see how we respond.”