Behind Malik Mueller’s tough performance and Buzz’s new orange and maroon sweater, Virginia Tech came from behind to defeat Georgia Tech 65-63 in Cassell Coliseum on Monday night.  The Hokies improved to 10-14 overall and 2-9 in ACC play, while the Yellow Jackets dropped to 11-13 and 2-10 in the ACC.

Buzz Williams, who always changes shirts at halftime because he gets so sweaty, donned a custom made orange and maroon sweater for the second half, which you can see in the picture below. 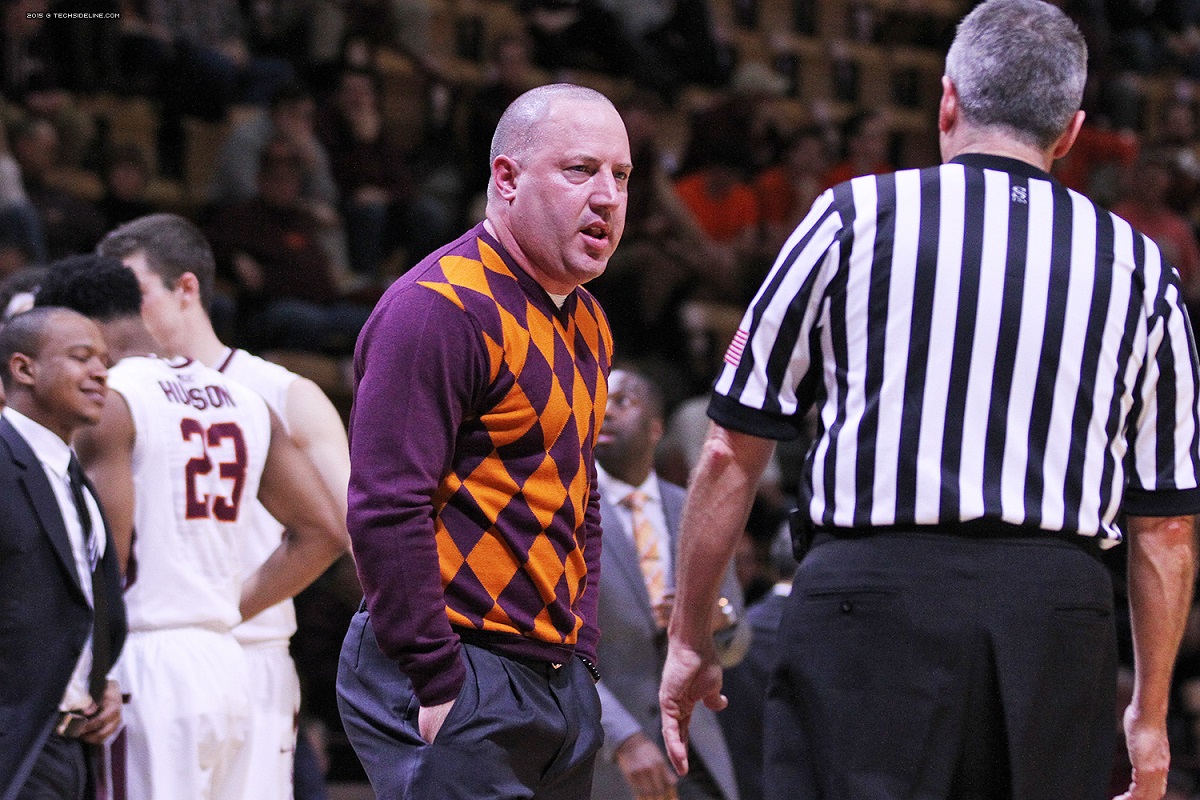 More important than the sweater was the performance of Malik Mueller, who had 17 points, four assists, three rebounds and a steal in 27 minutes of action.  He was 6-of-8 from the field, 3-of-5 from three-point range, and knocked down the game-winning three from the corner with 15 seconds remaining.

Ever since Buzz Williams began using Mueller at the backup power forward position against UVA, the r-freshman from Germany has scored in double figures three times in six games after breaking 10 points just once in the first 18 games of the season.  He has scored 73 total points in his last six games (12.7 ppg) while developing into Tech’s best post defender despite his 6-3 height.

“I think he’s our best low post defender,” Buzz Williams said after the game. “I know he doesn’t look like he is, but I think he’s eaten enough powdered doughnuts and Kit Kats that he can bang around down there and feel comfortable doing it.”

Adam Smith added 15 points for the Hokies, while Shane Henry had 10 points on a perfect 4-of-4 night from the field.

After jumping out to a 14-2 lead, VT couldn’t stay hot and in fact trailed 31-26 at halftime.  They rallied to tie the game at 35 early in the second half, but the Yellow Jackets eventually took control.  They had what seemed to be a commanding 58-48 lead with 5:07 remaining when Tadric Jackson (12% three-point shooter coming in) nailed a three-pointer.  It was one of Jackson’s two three-pointers on the day.

Rebounding was once again the culprit.  Georgia Tech entered the game #7 nationally in rebounding rate, and they beat the Hokies 39-27 on the boards while pulling down 19 offensive rebounds.  However, the Jackets didn’t play smart offensively, taking 19 three-pointers (making four, a 21.1% clip) despite being just a 28% three-point shooting team coming into the game.

The Hokies were able to take advantage, scoring on their final eight possessions of the game.  Trailing 63-61, freshman Jalen Hudson drove to the basket, and kicked it to Mueller in the corner after drawing help defense.  Muller nailed the three-pointer, and Marcus Georges-Hunt missed a heavily contested shot in the lane with 2.5 seconds left.  The ball went out of bounds to the Hokies, Adam Smith made one final free throw, and the Yellow Jackets couldn’t get off a final shot.

“I think Jalen [Hudson] is our best downhill guy when he wants to be,” Buzz Williams said of Tech’s game-winning shot.  “So we had Jalen downhill, if he gets fouled or gets Malik [Mueller]’s man in help, pitch it.”

The Hokies return to action on Saturday when they travel to Clemson.  Tipoff is scheduled for noon, and the game will be televised by RSN.