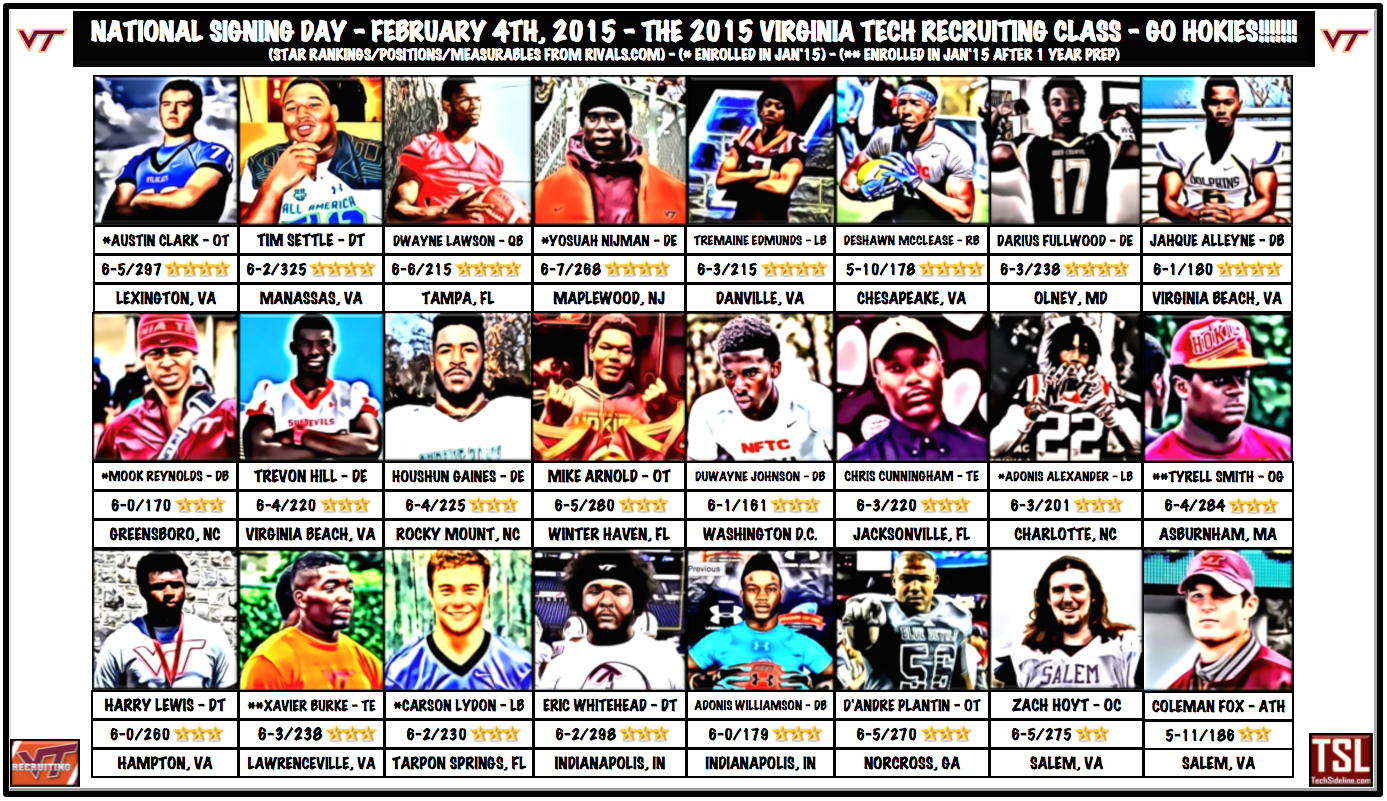 Virginia Tech’s 2015 recruiting class is complete.  The Hokies picked up 17 letters of intent on Wednesday to go along with the five 2015 prospects who enrolled in January.

Note: As always, we don’t count 2014 signees Xavier Burke and Tyrell Smith as part of the 2015 class because they signed last February, though we do include them in OXVT’s info graphic above.

The Hokies were focused on signing a lot of offensive and defensive linemen in the 2015 class, and they accomplished that goal from a numbers standpoint.  However, it’s not quite clear where some of the players will end up, or whether they will qualify.

DT Tim Settle: Settle may have to attend prep school.

DE Trevon Hill: Hill left Salem High School in October, and currently attends Renaissance Academy, a school for students with academic, discipline or behavior issues.  We do still expect him to enroll at Tech.

DL Yoshua Nijman: Nijman will begin his career at DE, but at 6-7, 277 already, he could be destined for the offensive line.

Houshun Gaines, who signed as a defensive end, will definitely play that position for the Hokies.  Tremaine Edmunds signed as a linebacker, but we at TSL feel there is a strong chance that he could eventually play defensive end or tight end.

It’s possible that Yoshua Nijman could also end up at offensive tackle, which would give the Hokies five offensive linemen for this class, with 2014 signee Tyrell Smith being a true freshman as well.

Of the three “blue chippers” in this class, two hail from the state of Virginia.

Three of Tech’s signees, including two of the top three, were once committed to other programs.  Austin Clark was a South Carolina commit before deciding to stay close to home, and Dwayne Lawson decommitted from Miami for a chance at early playing time.  Darius Fullwood originally chose the Kentucky Wildcats.

We’ll have much more on the 2015 recruiting class in the coming days, including scouting reports on every player throughout the month of February and into early March.