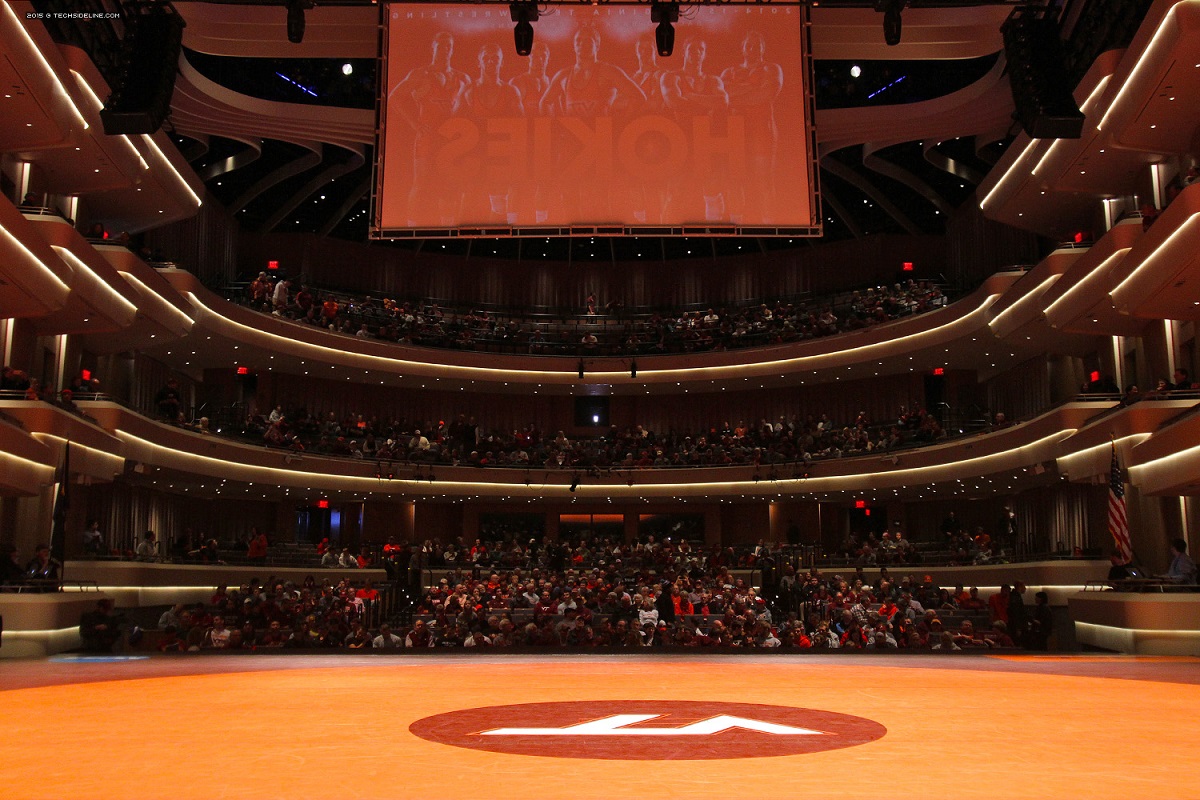 On Saturday, Virginia Tech sophomore wrestler Joey Dance didn’t know where the Moss Arts Center was located. Sunday, his major decision victory on its biggest stage brought the sold-out crowd at the Anne and Ellen Fife Theater to its feet and helped the No. 9 Hokies to an 18-16 win over No. 12 Virginia.

Even with no knowledge of the building, he had ideas about how the sound might differ from the typical confines of Cassell Coliseum and was excited to hear how a takedown might ring through the place.

“I knew the acoustics would be really good, and really loud, and when you pick up a guy and slam him down on the mat it would echo throughout the gym,” Dance said, “so that would be really cool.”

Exponentially louder than the takedowns, however, was the roar of the capacity crowd. With 1,200-plus in attendance (including a who’s who of Hokies such as president Tim Sands, athletic director Whit Babcock and football coaches Bud Foster, Charley Wiles and Bryan Stinespring) the crowd Sunday was a little more raucous than last week when the Mexican national symphony was in town.

“It was unbelievable,” said Nick Brascetta, a redshirt junior who wrestled for the first time since injuring his elbow in early November. “The venue, the lights, the show they got going on. It was almost like promoting a UFC event. It was awesome. I can’t thank the fans enough for coming out and making it as loud at it was. Without them it wouldn’t be much of a venue. You have to pack it with people who want to be there.”

Brascetta’s return helped to limit the damage caused by the absence of third-ranked Devin Carter, who was dressed in street clothes after injuring his knee at Iowa State on Jan. 18. With Tech leading 11-9, sophomore Jerry Ronnau wrestled in the All American’s spot at 141 pounds.

Ronnau lost to Jerry Van Hoose 8-4 to put Virginia ahead 12-9, but a two-match swing, capped by Brascetta, pulled the match and the Commonwealth Clash points that come with it to Tech’s side for good.

Trailing 12-11 with three matches remaining, Sal Mastriani cruised to a 19-6 major decision rout over Virginia’s Chris Yankowich, earning the much needed bonus point. Mastriani, now 21-7 on the year, scored an early takedown in the first period and never looked back.

Brascetta was next on the mat for Tech, and he won all three periods against Andrew Atkinson to extend Tech’s lead to six points.

“(It was) exciting, a little bit overwhelming,” said Brascetta, a redshirt junior. “I got a little more tired than I think I wanted to be, but I was talking with one of the assistant coaches, and he said you can’t simulate that type of environment. You can’t really do anything about that. The nerves and the adrenaline you get going out there, it’s nothing like you can simulate in a match and in practice.”

Dresser agreed with Brascetta’s assessment of early onset fatigue, saying after the match that if he hadn’t hit a wall around the fifth minute, bonus points would’ve been a probability. But while Brascetta’s fatigue was a result of not competing in three months, Dresser would’ve liked for the rest of the team to be a little sharper.

“I felt like we wrestled OK,” said Dresser, who admitted he’s rarely completely happy after a match. “I get it that it was probably a tough environment to wrestle in for our guys. They’ve been hearing about it and reading about it and seeing tweets and Facebook pictures and countdowns, so to be a little tentative and more tired than normal, I think that’s probably the way I would assess it. I think we got more tired in some situations than we normally do, but that come with nerves. I’ll take it, though. Any time you can beat the No. 12 team in the nation, I’ve got to be happy with it. I’m not 100 percent happy because I think we’ve got to take some steps in some weight classes. I feel like we didn’t charge, and this is a charging sport. We’ve got some work to do.”

With an 18-12 lead, Tech’s final wrestler, Chad Strube, would secure a Tech victory with any outcome other than a pin. His opponent at the 165-mark was Virginia’s best wrestler, second-ranked Nick Sulzer.

“Well, you always like to go out there and win,” Dresser said. “We’re making progress at 165, and Strube is kind of a risk taker, so that’s kind of the guy that as a coach, my heart is going pitter-patter because he roles around like a maniac. He probably had to tone things down, too, because he didn’t want the dual meet coming down to him trying something, but usually Strube throws it all out there.”

Sulzer led from start to finish and won in convincing fashion via major decision, but it wasn’t enough as Strube avoided the pin and captured the first conference win for Tech this season.

Austin Gabels’ major decision victory in the day’s second bout gave the Hokies it’s first lead of the match and, along with Dance and Mastriani, one of the three bonus points they needed for the win.

Tech’s victory, which hoisted the Hokies to 10-2 on the season and 1-0 in the ACC, was the first of three matches slated for Virginia Tech’s new $100 million Moss Arts Center. The next two matches, Friday against Pittsburgh and Sunday against North Carolina State, are set for the same venue.

And when those matches come around, Dresser expects his team to be a little less hesitant.

“They better not be that damn tentative next time, I’ll tell you that,” Dresser said. “The butterflies are over. It’s time to roll.”