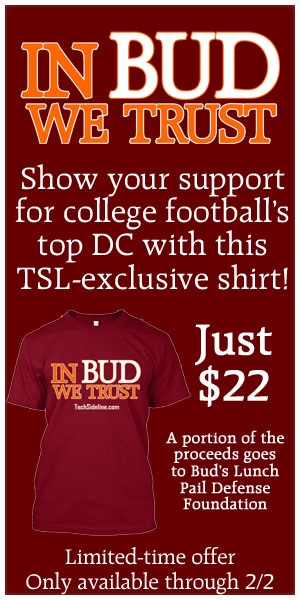 Chew is glad to be in Blacksburg.  He has been around many good coaches in many good programs, and he’s happy to be along for the ride with Buzz Williams.

Chew never thought about being a basketball coach.  He went to graduate school to get his MBA, and worked in a bank.  Someone asked him to coach an AAU team, one thing led to another, and he quit his regular 9-5 job.  He took a pay cut to coach at a Community College, and then things took off.

He enjoys being a part of young men’s lives and seeing them develop.  That’s a big reward of coaching.

The Hokies have to get better at rebounding.  They are playing a much smaller lineup than other teams in the league.  However, it’s more about length than actual height.  They have progressively gotten better in ACC play, but it’s a work in progress.

Louisville is one of the best teams in the country, and Rick Pitino is one of the best coaches in the game.  There was a talent disparity, and the Hokies have very little experience.  However, they can’t use that as an excuse.  They have to keep working and trying to get better prepared for those games.

When recruiting to Virginia Tech, you can certainly sell the ACC.  That’s the #1 selling point.  A lot of kids want to play in the ACC.  You can sell the school’s academics, and you can sell the town of Blacksburg.  It’s a very unique setting.

Signing Chris Clarke was huge.  He is considered the #1 prospect in the state of Virginia and a top 50 kid nationally.  He plays for Boo Williams, who has a great AAU program.  They signed Justin Robinson from the Boo Williams program as well.  Signing those guys helped create some momentum in recruiting.  Robinson was the first player to visit Tech on an unofficial visit after Buzz Williams took over.

When this staff took over at Tech, they tried to come up with a gameplan for how to rebuild the program.  There was a point in time in a five year span when the Hokies had the third most wins in the ACC.  This staff knows if they sign the right kids and build the program correctly, they can do great things here.

Isaac Chew knew Whit Babcock before either arrived at Tech.  Chew texted Babcock to congratulate him on getting the Tech job.  He never expected anything to come out of it, but a month later Buzz Williams was asking Chew about Babcock.  Chew told Williams that Babcock would put anyone he hired in a position to have success.

Chew loves Blacksburg and the small town feel.  He can actually go home for lunch and go home before games because everything is so close.  He feels like his family is safe here.

Kerry Blackshear is Tech’s third 2015 signee.  He has a really good feel about how to play around the basket.  Chew is very excited about him.  He is a great student.  He has the best transcripts of any recruit that Chew has ever recruited.  He makes A’s and B’s in tough classes.

Recruiting is very important.  It’s the footprint of the program.  Tech doesn’t recruit large numbers of players, but they identify the players and high school/AAU programs that they can have a relationship with.  Buzz Williams started building his relationship with Boo Williams when he was still at Marquette.  The relationships help you in the long run.

Tech’s kind of guy has to be tough.  Toughness is something the coaches don’t waver on.  The next thing is motor.  He has to play hard.  Buzz Williams will never be held hostage by talent.  They want guys whose characters are fits for this staff.

Seth Allen and Zach Leday are doing a great job in practice.  They are sitting out this season.  Chew is pleased to have both of them, and he’s happy about the direction they are going.

Justin Bibbs didn’t start on Tuesday night because they didn’t want him to get in early foul trouble.  They were trying to save a foul or two early in the game because Louisville was going to pound it inside early.

Bibbs comes from a really good high school program, and he was very well-coached.  His learning curve is smaller because he came up in a national program at Montverde.  He has played more minutes as a freshman than any player Buzz Williams has ever coached.

Buzz Williams is in Texas right now for recruiting purposes.  Working for Buzz, you have to always be “on.”  His motor runs at such a high pace.  You have to be self motivated and always on the go.  He will text Chew at two or three in the morning.  If something is on his mind, he has to get it out as quickly as possible.

North Carolina is good.  They have a lot of length, in addition to size.  They will be a major challenge because they are great offensive rebounding team.

Baseball Night in Blacksburg will be great this year.  Former Phillies manager Charlie Manuel, a Virginia native, will be the special guest.  It’s big for the program, because it’s Tech’s biggest fundraiser of the year.

The team is progressing well, and everyone is healthy right now, knock on wood.

Tech lost assistant coach Mike Kunigonis to the head job at Northern Illinois, but they added former assistant Ryan Connolly back to the staff as the replacement.

Mark Zagunis is in the Cubs organization, and he was promoted twice last year.  Hopefully he’s on his way to a big league career. (Isaac Chew is a big Cubs fan, and he’s hoping they are about to turn the corner.)

Three names to watch: Sean Keselica, who will be the Friday night starter.  Saige Jenco, who is a great center fielder and leadoff guy.  Alex Perez, a four year starter at Virginia Tech.  Perez will also pitch some this season.

Virginia Tech has held the Commonwealth Cup for 3700 days. #Hokies