In today’s world of college football recruiting, there’s a fine line between who’s considered elite and those who are nearly elite in the eyes of the very same pundits. This group of athletes are a cut above. Not quite in that top 30 stratosphere where the five-stars reside, but enough to be a top 250 prospect. Four-star prospects enter school hoping to play right away.

In this piece, we take a look at the number of four stars from some of the top performing schools in the ACC. You will be able to see a direct correlation on how the effort coaches put in working the living rooms of recruits transfers to winning on the field.

There is no surprise who the head of the class is. The reigning, defending, undisputed FBS Champion Florida State Seminoles. Legendary head coach Bobby Bowden stepped aside in 2010 after years of sub-par finishes and declining recruiting and current ‘Noles head coach Jimbo Fisher quickly brought FSU back to national prominence.

According to the Rivals database, since 2011 Florida State has captured the #2, #6, #10, #4 and is currently the #2 ranked recruiting class in the nation. Those impressive figures have yielded Fisher and the Seminoles conference championships in 2012-14 culminating with a national championship in 2014, their first since the 2000 Sugar Bowl victory over the Virginia Tech Hokies.

Since 2011, Florida State has produced 57 four-star athletes which comes out to an average of 11.4  players per class or roughly 44% of each class. Florida State currently rides a 29-game win-streak on the strength of that depth of base.

Like Fisher at Florida State, Brian Kelly took over the reigns at Notre Dame in 2010 and has progressed with favorable success on the field and on the road recruiting. As a quasi-member of the ACC, Notre Dame has reeled in an impressive 51 four-star players over that time span (just six shy of Florida State’s total).

Averaging 10 four-stars per year since Kelly has taken over full-time (11 thus far for 2015), the Irish closed with the #10, #20, #3 and #11 classes in his first four season. Currently they hold steady with the #11 recruiting class for 2015. The infusion of talent back into South Bend netted Notre Dame an appearance in the 2013 BCS National Championship game. Since Kelly’s first full recruiting cycle in 2012, the Irish have gone 36-15 and show no signs of slowing down. 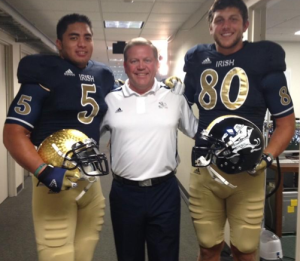 Taking over for Tommy Bowden midway through the 2008 season, Dabo Swinney began to swing the pendulum back Clemson’s way, restoring the successes of past glory in the early 80’s. Swinney, known nationally for his high energy approach and recruiting prowess put together top caliber classes with the #8, #14, #14, #13 and #4 ranked groups respectively. This has translated to a 41-11 record over that span including two BCS bowl appearance and an ACC Championship.

With SEC power and in-state rival South Carolina battling for top billing in the Palmetto state, Swinney’s “players coach” approach has proved successful as Clemson continues to collect top flight talent across the southeastern part of the nation, convincing many elite athletes to join the high-profile program and demonstrate those skills in Death Valley.

Miami’s Al Golden took over in December 2010 as former coach Randy Shannon was fired following a 28-22 record in four seasons. Given the reputation and plethora of top talent available in his immediate recruiting territory, Golden has produced the third most four-star recruits in the ACC since 2012 (first full recruiting cycle) with 35 (FSU with 44 and ND with 42). Those numbers were good enough to land the Canes the 9th, 20th, 12th and currently 12th best class going into 2015.

Despite the highly touted classes, Golden’s Hurricanes have yet to realize that potential posting a combined 28-21 record during that span. Some argue that Miami’s location and “scenery” sell itself and there’s some truth to that. The lore of the “U” with their past success and appeal are also undeniable. 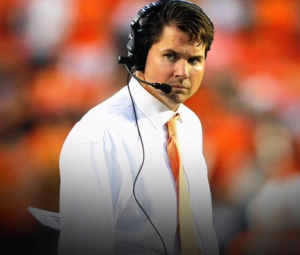 The 2014 Canes were led by true freshman and four star QB Brad Kaaya, who won both the top Offensive Rookie and overall Rookie of the Year in the ACC as voted by the coaches and media. Recruits take note of this type of early success as Golden looks to build on that momentum and return the football mystique to Coral Gables.

Notable four stars: Stacy Coley, Brad Kaaya. The Canes look to have a breakout year in 2015 with the depth accumulated by Golden and company.

The Hokies are a bit of an interesting situation. They dominated the ACC’s Coastal Division from their arrival in 2004 through 2011. Head coach Frank Beamer’s crew produced five ACC Championship appearances and won three. This success also netted Tech five BCS bowl games, though the Hokies only managed the one win in the 2009 Orange Bowl against Cincinnati (unless like those of us at ITA who believe Danny Coale made that game-winning TD catch, which would make it two of five. HE MADE THAT CATCH!)

Tech’s steady decline since their Sugar Bowl loss to Michigan has rendered Beamer and company an average program, and recruiting has suffered during that span. Although they rank 5th in the league since 2011 collecting 27 four-star players. In spite of this living room success, it has not translated to the winning seasons that had become commonplace in Blacksburg. Much of the elite level talent has fled the state to join rival ACC programs, and the SEC hasn’t hesitated to invade Virginia in search of talent. The Hokies don’t recruit dirty, and there’s probably a 50/50 split in opinion on that in terms of recruit-niks. Frank Beamer has always tried to exude class, and this has hurt him in countless ways over the years,  but a man has to sleep with himself every night and look himself in the mirror each morning. 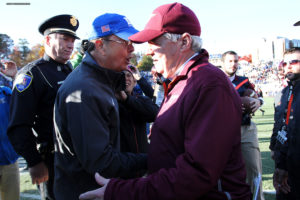 Since 2011, the Hokies have gone 21-17 on the field which is not commensurate with the talent that Beamer has attracted to VT in recent years. This trend is eerily similar to the steady decline Bobby Bowden experienced in his waning years at Florida State. Whether it’s old school schemes, players fizzling out of the program and not living up to their potential or the inability to adapt to the evolving college football scene, the shortcomings and need to win at recruiting have become sensitive issues at Tech.

With six four-star athletes verbally committed for the class of 2015, the Hokies are looking to regain their past form and return the program to competing annually for top billing in the conference.

Recruiting success doesn’t always equal success on the field. This is evident with the mediocre play and records by the Miami Hurricanes and Virginia Tech Hokies who are entrenched in the “middle class” of the ACC and generally finish in the top 25 nationally in recruiting. Those programs have had plenty of success in the 2000’s, but former glory doesn’t always carry over. Each of those teams have underperformed compared to their recruiting rankings in recent years, so star ranking don’t always guarantee quality results.

College football recruiting is a fickle game and constant battle. Those coaches and staff’s who let their guards down, rest on past laurels or just flat out become complacent suffer the consequences on the field. In some cases, coaches recruit well (UNC and UVA come to mind) but they can’t muster much success on Saturdays when it counts.

In the long run, recruiting rankings do matter and for the most part, the pundits and analysts across the nation have a fairly good idea on who’s talents and skill-sets will transfer to the next level. Some schools can take underrated kids and coach them up into stars. But those programs will never hoist the coveted national championship trophy.

With every player posting highlights on YouTube and Hudl, there are no more in-state secrets or relied on pipelines that coaches can bank on like in the past. By just taking a look at the top schools and coaches who recruit the best, you can clearly see that it correlates to success at year’s end.