This time a year ago, I could not wait to see the BCS destroyed. The BCS had served its purpose of providing a 1 vs 2 Championship game each year, but with a convoluted formula, politics, and annual controversy, the whole process had become outdated. The time had finally come for a reasonable solution…or so we thought.

Enter the College Football Playoff and its incredibly creative and catchy title. The fact that FCS/D1AA already uses a playoff to crown a champion not withstanding, fans of college football finally have been given what they want. No….Wait….TCU didn’t make it into the playoff!? Baylor lost one game all year and they’re left out!? So no Big 12 members at all? The one UNDEFEATED Power 5 Conference team is the #3 seed!? FACEPALM!!!! 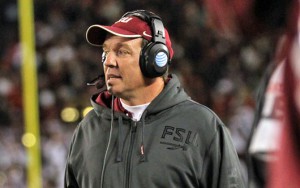 There is so much wrong with this system, I don’t know even know where to start. From this point forward, this article may lack coherent structure, but it seems as though that has become par for the course for College Football, so bear with me. Even typing that last unintended pun makes me cringe for the Baylor Bears. Let’s try this: We’ll look at what the Committee got right, then what the Committee got wrong and finally how to fix this mess.

WHAT THE COLLEGE FOOTBALL PLAYOFF COMMITTEE GOT RIGHT:

WHAT THE COLLEGE FOOTBALL PLAYOFF COMMITTEE GOT WRONG:

DISCLAIMER: The following views/opinions are that of myself, Darrell Jones, and are not necessarily the same views held by the rest of the Inside the ACC Staff, or the Sportswar network.

If you have spent any time listening to ESPN the past 48 hours, you might be as nauseous as I am. It seems as though every ESPN employee has been given a memo to celebrate how great this Playoff bracket is, and how the Committee did such a great job in the face of such incredible adversity. In reality, all the Committee did was screw the least established and prestigious fan bases, while catering to who they thought would provide the best national exposure and garner the most viewers. ESPN and all Corporate partners are ecstatic, while real college football fans are left with another product that lacks any and all credibility.

WHAT DID WE HATE ABOUT THE BCS?

#1. A convoluted formula that no one understood:

If you invested your time throughout this season listening to any of the members of the Committee discuss what criteria mattered in their decision making, you know that you were never given a concrete answer. The playoff bracket has been announced and I still don’t know how or why the decisions were made. Well…actually, I do know and that leads me to #2.

As I stated earlier, the Committee made a conscious decision to make the people who have the most influence the happiest and leave the rest of us looking for common sense and integrity be damned.

Ohio State got beat in their beloved horseshoe, by a 6-6 Virginia Tech team, that as the season unfolded became one of the worst offensive teams in the last 10 years. That would fall under the category of BAD LOSS. In comparison, Baylor’s one loss came on the road against West Virginia, who finished 7-5. West Virginia played one of the tougher schedules of the year with 5 opponents ranked heading into their games, including: #2 Alabama, #4 Oklahoma, #4 Baylor, #7 TCU, and #12 KSU. When compared to Ohio State, Baylor’s loss came in a hostile environment against a much better opponent. TCU’s lone loss was a 3 point defeat in a shootout @Baylor, clearly the best loss (if such a thing exists) of the Bubble teams.

So if we are discussing how to seed these three Bubble teams, based solely on their losses, TCU>Baylor>Ohio ST.

ESPN is telling the world that the Committee got it right, so maybe I’m missing something. Perhaps Ohio State played a much tougher schedule and had better quality wins.

Including the Big 10 Championship Game, Ohio State went 3-0 in top 25 matchups: @#8 Michigan State, @#25 Minnesota (later knocked out of the top 25 by Wisconsin), and finally #13 Wisconsin. Ohio State’s out of conference schedule was a brutal run of @Navy, VT, Kent State, and Cincinnati.

TCU went 4-1 against top 25 opponents. That doesn’t include a 30-7 victory over the same Minnesota team that Ohio State only beat by a touchdown. TCU had victories over #4 Oklahoma, #15 Oklahoma State, @#20 West Virginia, and #7 Kansas State, while losing @#5 Baylor.

So based on strength of schedule arguments, Baylor is the team to beat. Baylor holds a victory over a team that many thought would be in the playoff, as well as a win against a Kansas State team that found themselves sniffing around the playoff at the end of the season. TCU has an argument based on volume, as they had 5 games against top 25 opponents and even had a much more impressive victory than Ohio State against common opponent Minnesota.

Breathe, yawn, blink a few times. I realize that was a lot of numbers, but it boils down to this; any argument you try to make for Ohio State being selected over TCU or Baylor is an absolute joke. The playoff Committee got it wrong. They sided with Ohio State’s prestige over the facts that say Baylor and TCU both are better teams. 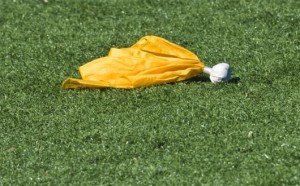 ENOUGH ABOUT WHO WAS LEFT OUT, WHAT ABOUT THE PLAYOFF SEEDING?

This topic has infuriated me for the past few weeks. I held out hope that the “body of work” argument the Committee preached week after week would lead to a correction in the final standings. That was not the case. There is no valid argument for placing an undefeated Power 5 Conference team anywhere other than the #1 seed, unless there are multiple undefeated teams. This is the basic foundation of sports.

The absurdity of the situation leaves an incredibly bad taste in my mouth. All SEC fans will talk about how great their conference is, and how deserving Alabama is of their #1 seed, but as I recall Ole Miss put a mark on Alabama’s record that doesn’t get wiped away just because Florida State struggled to win “pretty”. Is Alabama the favorite to win it all this year? Maybe so. But they still lost a game this year, and as ugly as some of the games were for FSU…as the kids these days say:

All they did was win.

They deserved the #1 seed, but ESPN’s unwritten (and thanks to the SEC Network, it may actually be a contractually written) rule, the SEC must be first and foremost in all things College Football. For years now, the SEC has started the season with numerous teams ranked, based on reputation and what we’ve seen in the previous seasons. Ohio State falls into the same category and as the Committee has shown this year, that’s not likely to change. If we are playing by those rules, then shouldn’t the undefeated defending National Champion Florida State Seminoles maintain their place at the top? If we are no longer using that mindset, then stop rewarding SEC teams for previous dominance when this season proved that the gap between the SEC and the rest of the Power 5 conferences has now closed. Florida State gets penalized for winning close games, yet Alabama is celebrated for winning a 55-44 game against Auburn, in which they gave up over 600 yards of offense and lost both the turnover battle and time of possession. This is the same Auburn juggernaut that managed 7 points against Georgia in a 31-7 beatdown before Georgia went on to lose to Georgia Tech, which went on to get beat by FSU in the ACC Championship game.

NOTHING ABOUT THIS PLAYOFF MAKES SENSE.

At this point, I would be hard pressed to say that this version of a playoff is better than the BCS. Voters could manipulate the polls in the BCS formula, but it still felt like there were components that helped to balance things out, and at the very least, the politics weren’t so blatantly obvious and insulting to fans. I keep looking at brackets and polls thinking something will change, wondering how it is possible for a room full of highly educated people, to come to this absurd conclusion. The only pass that I could possibly give the Committee is that they were limited to only four teams, meaning they had to leave deserving teams out.

Did they pick the right team? Absolutely not, but perfect results cannot come from an imperfect system. I sincerely hope that this will be the only season we have to deal with this four team playoff. The powers that be, namely the sponsors, make up rules on the fly. Maybe they’ll see just how asinine this whole ordeal has been, and they’ll move to what they should have done all along, an eight team playoff.

TO FIX THIS MESS, THE NCAA HAS TWO OPTIONS:

Each Conference Champion earns an automatic bid, leaving three at-large bids. Baylor and TCU would have made it in with this scenario, leaving two other at-large bids to be handed out. Ohio State wouldn’t have had to be shoehorned in via politics. Teams would have been able to earn their way in based solely on the merit of their season.

College Football’s Playoff is the most restrictive postseason in sports. The NCAA Basketball tournament allows almost 20% of teams to compete. College Football’s four team playoff allows around 5% of the Power 5 Conference teams a chance at the post-season. The Jones Method would allow postseason entry to 15% of the Power 5 Conference teams. 11 teams would qualify for the playoffs. The 5 Conference Champions earn automatic bids as well as first-round byes.  The remaining six spots are all at-large bids that would face off against one another in the opening round. The winning three teams would then combine with the 5 Conference Champions to round out the 8-team bracket.

WE’VE GOT WHAT WE’VE GOT…

College Football as a whole has started to alienate and belittle its fans. The last few years have been an embarrassment for the NCAA as a whole, with all the scandals and lawsuits.  This year’s Playoff fiasco has done nothing to help that. With that being said, I encourage you to watch some of the lesser known bowl games that you may ordinarily skip. Watch the kids who play for the love of the game and who are excited just to be in a bowl game, maybe the Military Bowl or the Pinstripe Bowl. Those bowls will feature the sorts of players and teams playing with the joy and passion that make College Football great, and after the disgust and frustration of this weekend, those games may be just what the doctor ordered to become a fan of college football all over again.