Virginia Tech overcame a rough start and scored the last ten points of the game to knock off #19 Duke 17-16 at Wallace Wade Stadium.

It was a mistake-filled game for both teams, and ultimately, the Blue Devils made more mistakes than the Hokies. Tech scored all 17 of their points following Blue Devil turnovers, as Duke quarterback Anthony Boone tied a season high with two interceptions and Duke lost a fumble on a kickoff return. Duke also tied a season high with eight penalties.

The Hokies, meanwhile, turned it over just once, as Michael Brewer threw his first interception since the North Carolina game on Oct. 4th — ironically, Virginia Tech’s last win before today. Brewer was 12-of-23 on the day for 138 yards and two touchdowns, a ten-yarder in the second quarter to Isaiah Ford and a 15-yarder to Bucky Hodges early in the fourth quarter that turned out to be the winning score.

The Hokies were led in rushing by an unlikely source: J.C. Coleman. Marshawn Williams ran five times for six yards, but then left the game in the second quarter with a knee injury. The injury was diagnosed as a “sprained knee,” with an MRI to come later, but Tech doctors also said after the game that Williams is likely done for the season.

Team doctor says #Hokies RB Marshawn Williams has been diagnosed with a knee sprain but "probably done for the year."

In Williams’ absence, Coleman rushed 20 times for 95 yards, with just one yard lost on the day. Coleman was very consistent, averaging 4.8 yards a carry with a long of just 12 yards. Coming into this game, he had averaged just 2.5 yards per carry, but he showed explosiveness, vision and patience setting up his blocks.

Williams and Coleman were the only tailbacks who played for the Hokies. Fullback Sam Rogers had one carry, for three yards.

The Hokies second-leading rusher, with three carries for 36 yards, was also unexpected: Brenden Motley. Motley, installed as the #2 quarterback after Mark Leal’s surprise departure during the bye week, saw his first action of the season and was used as a change-of-pace running quarterback. Motley ran the read option several times with success, catching the Blue Devils off guard.

Also critical to the win were two missed field goals by normally reliable Duke placekicker Ross Martin. Martin was 13-of-13 coming into the game, but he made just 3-of-5 against the Hokies. Martin missed a 51-yarder in the second quarter, then missed a critical 40-yarder with just 2:33 left that would have put Duke up 19-17.

Defensively, the Hokies were led by Kyshoen Jarrett with 13 tackles, and Andrew Motuapuaka with ten. The Hokies, college football’s #8 team in sacks, had four on the day. Duke was the #1 team in the nation in sacks allowed, giving up just four in nine games, but the Hokies matched that today. Dadi Nicolas paved the way with two sacks, and Detrick Bonner and Ken Ekanem added one apiece.

Conversely, Duke had just 15 sacks coming into the game, but rang up six sacks of Brewer on the day, twice as many as the Hokies had given up in any previous game this year.

Hokies get off to slow start

Duke got a 36-yard field goal by Martin and a 2-yard TD run by Josh Snead for the 10-0 lead, and when the first quarter ended, Duke was on Tech’s 27-yard line and was driving for another score.

But on the first play of the second quarter, Tech linebacker Deon Clarke picked off Anthony Boone near the Tech goal line. Clarke was in single coverage downfield on Shaun Wilson, with inside leverage, and Boone put the ball right in Clarke’s gut. The ball was marked at the Tech two yard line.

Despite showing no signs of life to that point, the Hokie offense drove 98 yards in 12 plays to make it 10-7 on a beautiful pitch and catch from Michael Brewer to Isaiah Ford.

Neither team was able to scratch the scoring column for the rest of the quarter. J.C Coleman was stopped on 4th and 1 at the Duke 42 yard line, and on the ensuing possession, Ross Martin missed a 51-yard field goal attempt, his first miss after making 14 straight to open the season.

The Hokies had the last possession of the half, but Brewer was sacked on 3rd and five from the Duke 42. The Hokies had two timeouts left and there was some time on the clock, but Tech and Duke let the clock run out and went into half time with the score 10-7, Duke.

The Hokies outgained Duke 141-40 in the second quarter.

Duke threatens to run away, but can’t

The Hokie offense struggled in the third quarter, picking up just one first down, totaling -1 yards due to sacks, and turning it over on a Brewer interception.

Despite Tech’s struggles, the Blue Devils only outscored Virginia Tech 6-3 in the quarter. Martin kicked field goals of 48 yards and 24 yards, the second coming with Duke up 13-7 and inside the Hokie ten yard line. Tech’s defense held on 3rd and goal from the six, forcing the short field goal that put Duke up 16-7 with 3:49 to go in the third quarter.

Brewer threw an interception on Tech’s next possession, and Duke took over on the Hokie 36 with a chance to blow it open. But on 3rd and ten from the 36, Dadi Nicolas rushed off the right side of the Duke offense and hit Boone’s arm as he threw. Derek Di Nardo was Johnny on the Spot. Di Nardo picked Boone off at the Tech 40 and ran it to the Duke nine yard line.

Tech was unable to punch it in the end zone, getting sacked in the process, but the Hokies got a 35-yard field goal from Joel Slye on the last play of the third quarter to make it 16-10, Duke.

On the ensuing kickoff, Duke committed their second turnover in a row, when DeVon Edwards was hit by C.J. Reavis and fumbled. The ball popped up into the air, and Dahman McKinnon recovered it at the Duke 31.

Brewer completed a 3rd and eight pass to Bucky Hodges to put the ball at the Duke three yard line, and after a holding call pushed the Hokies back to the Duke 15, Brewer fired a beautiful strike to Hodges in the back of the end zone, and the Hokies were up 17-16 with 12:47 left.

Neither team threatened to score the rest of the way. The only drama came when Virginia Tech inexplicably faked a punt on 4th and 16 from their own 48 with just over three minutes left. A.J. Hughes fired a pass to Josh Trimble that was complete, but it was only good for ten yards, and Duke took over on their 42.

Frank Beamer explained after the game that a miscommunication between him and Di Nardo resulted in Di Nardo, the punt team signal caller, accidentally hearing the code word for a fake punt.

That faux pas appeared to be a critical mistake. Duke drove to the Hokie 23 yard line, and with 2:33 left, Martin lined up for the go-ahead 40 yard field goal. Perfect from within 50 yards all season, Martin hooked it wide left, and the Hokies held on to the lead.

Duke still had all three of their timeouts, and they were able to force a three and out and take over on their 40 yard line with exactly two minutes left. The Tech defense has failed the Hokies numerous times in this situation in the last three seasons, but this time they stiffened. After Duke got to the Tech 41 yard line, the Hokies got consecutive sacks from Ken Ekanem and Detrick Bonner, then pressured Boone into an incompletion on 4th and 21 to seal the victory. 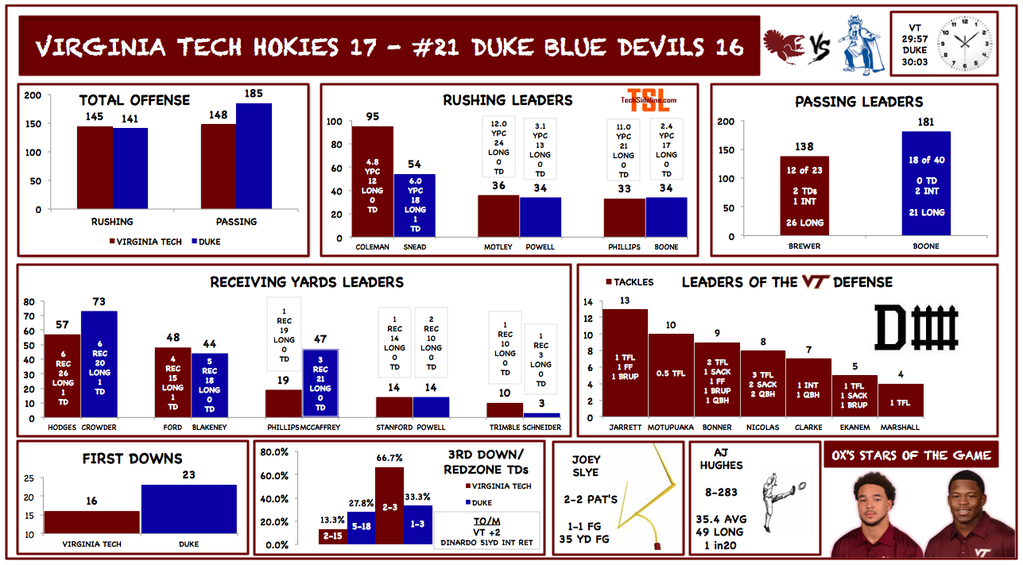