The Hokies are in danger of being outrushed for the first time since 1987, Frank Beamer’s first year at Virginia Tech.

In 1987, the Hokies went 2-9 in their first season under Beamer, and the rushing game was a disaster. Tech averaged 136 yards on the ground, but their opponents cruised through the Hokie defense for 221.3 yards per game, a margin of -85.3 yards per game.

In 1998, the Hokies outrushed their opponents 148 ypg to 139.1 ypg, and a beautiful friendship between Frank Beamer and the running game was formed. It peaked in 1999, when the Hokies ran for 253.9 ypg and allowed just 73.9 ypg, a margin of 178 yards per game, still the best under Frank Beamer.

Through 2013, the Hokies extended that advantage to 26 straight seasons of outrushing their opponents, but in 2014, that streak is in danger of being broken. 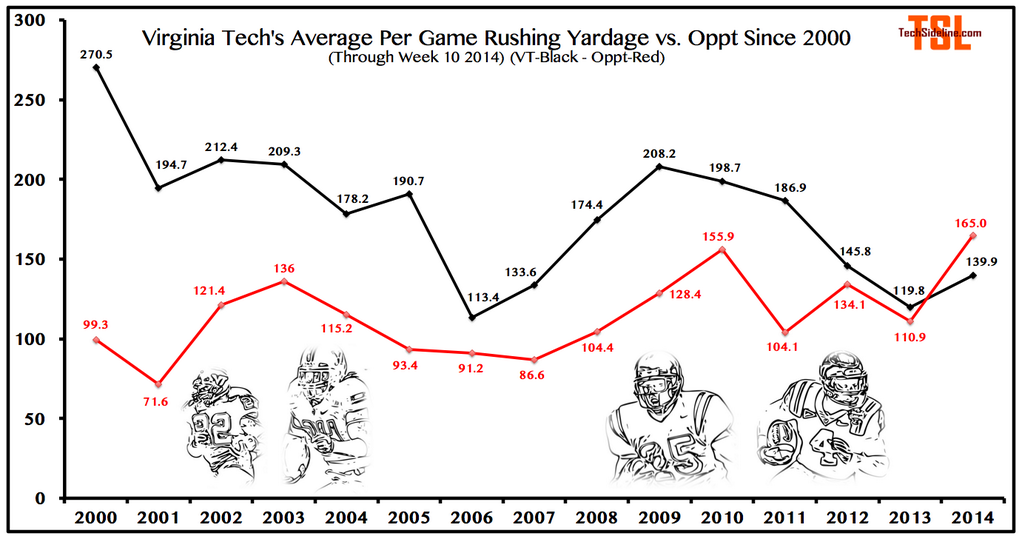 In the last three years, as the losses have mounted, the rushing margin has narrowed to almost zero, and in 2014, Virginia Tech’s opponents have outrushed them through nine games. Since the start of the 2012 season, a span of 35 games, the Hokies have outrushed their opponents 4,712 to 4,670 — a margin of just 42 yards, or barely over a yard a game.

The rushing advantage the Hokies have enjoyed since the final season of Ronald Regan’s presidency has all but disappeared, and it’s no surprise that the Hokies wins have declined at the same time.

At the same time, a scoring margin advantage that the Hokies have held since the start of the bowl streak in 1993 is also on life support over the last three seasons. 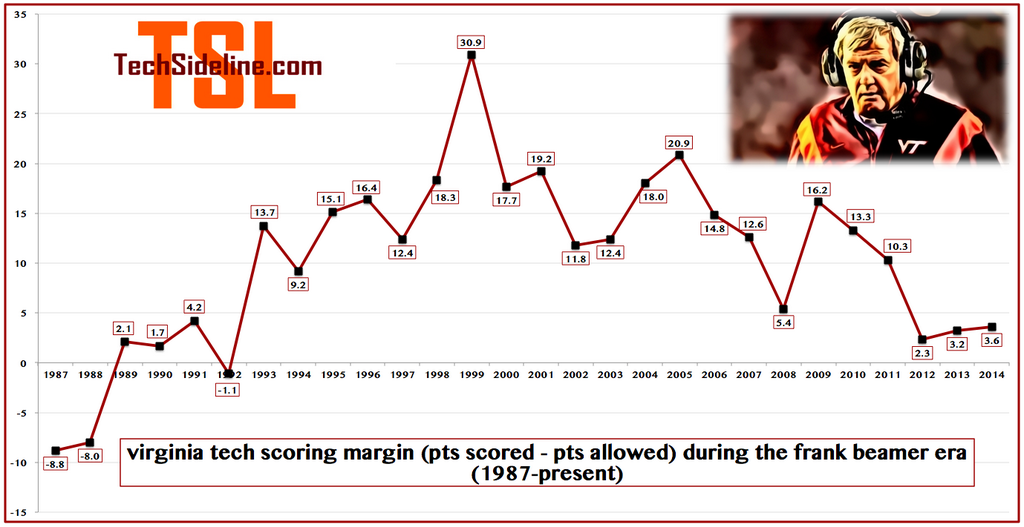 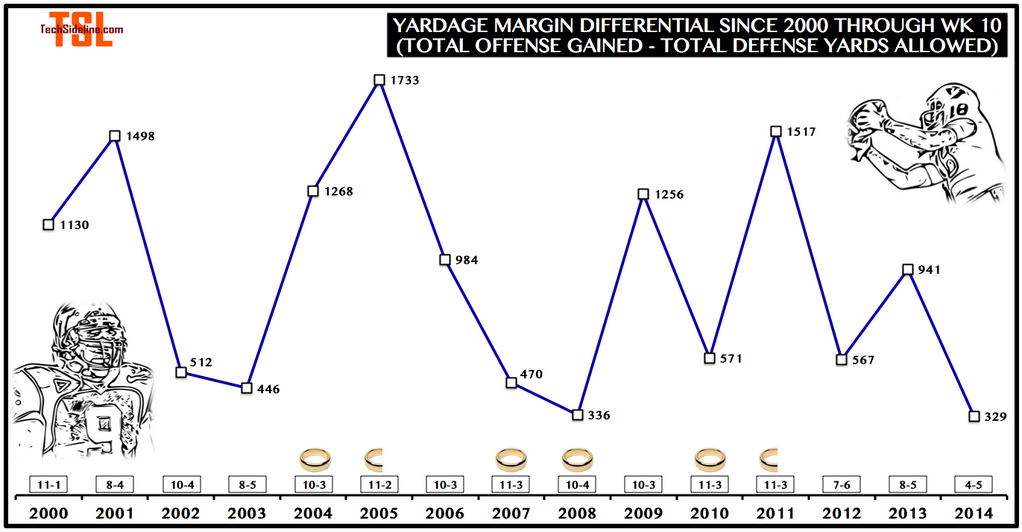 What’s a Hokie to do? Lean on quarterback Michael Brewer, who threw 11 interceptions in his first 215 attempts this season, but has quietly thrown zero in his last 118 attempts.

With the decline of the running game and the dependence upon Brewer, the large majority of Virginia Tech’s first downs have been achieved via the pass, as opposed to the run, a trend that has been developing in recent years. 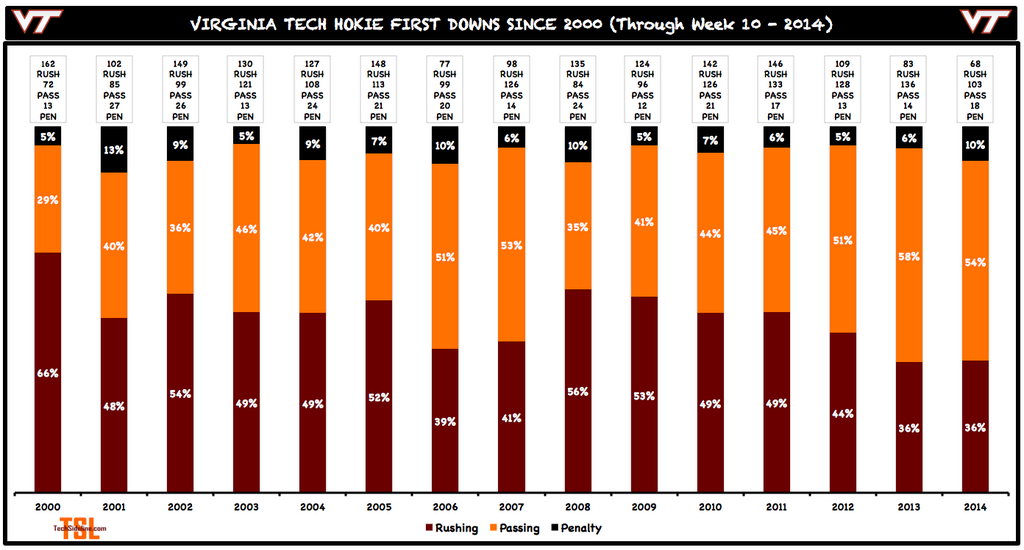 The Hokies third-down conversion rate, which hovered around 50% in the early part of the season has fallen down to 42%. That’s not great (#56 nationally after being top 11 early in the season), but it’s still better than last year’s disaster, and ranks among Tech’s best since 2000. Hokie fans just hope that VT can keep converting at that rate, and not decline further. 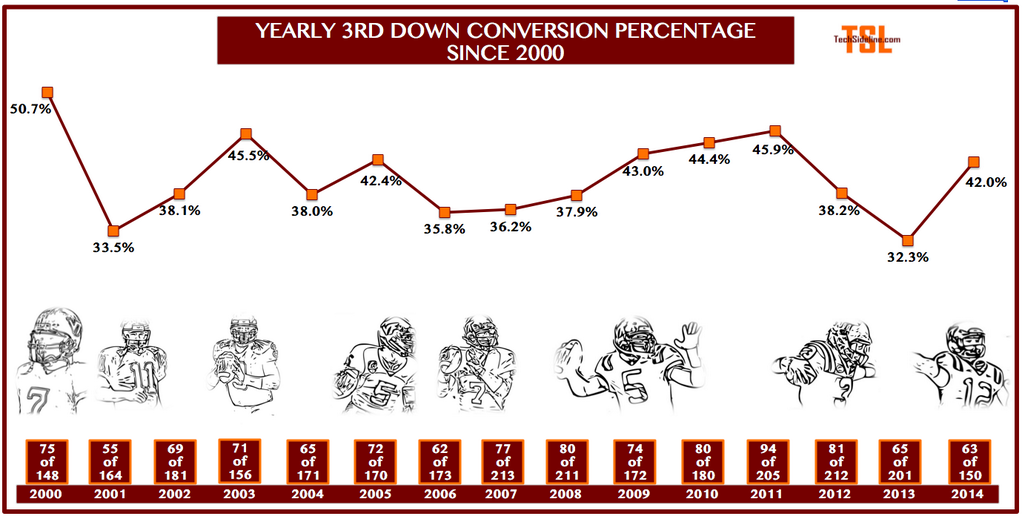 Ironically, Brewer hasn’t thrown a pick since the UNC game (a win), but the Hokies have lost the ensuing three games anyway. Part of the reason is that five of Tech’s seven lost fumbles have occurred in those last three games, and the Hokies are still in the negative in turnover margin. 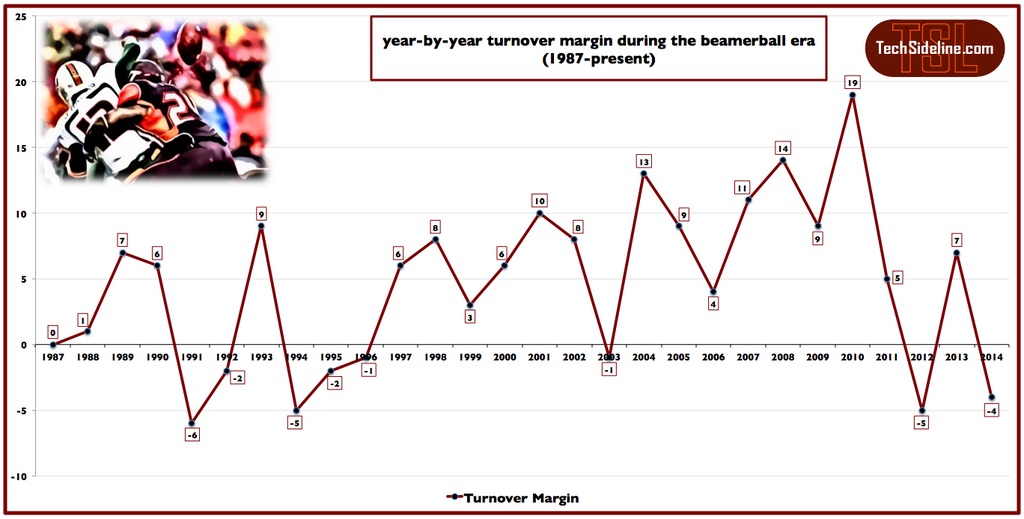 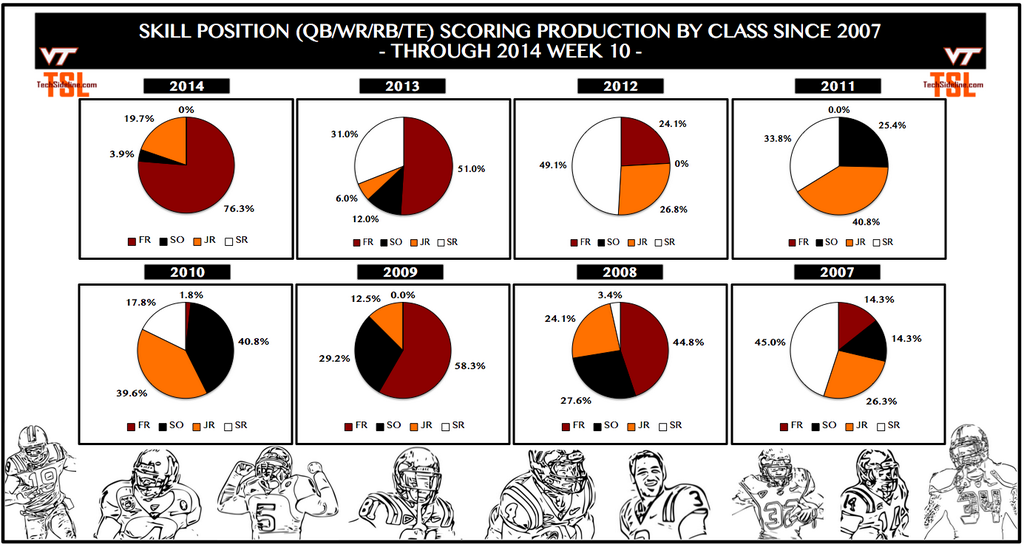 The red zone offense, which had a good day against Boston College (season-high six RZ appearances, 4 TDs, 2 FGs), is neither shining, nor is it a disaster. It’s in line with many of Tech’s past seasons. 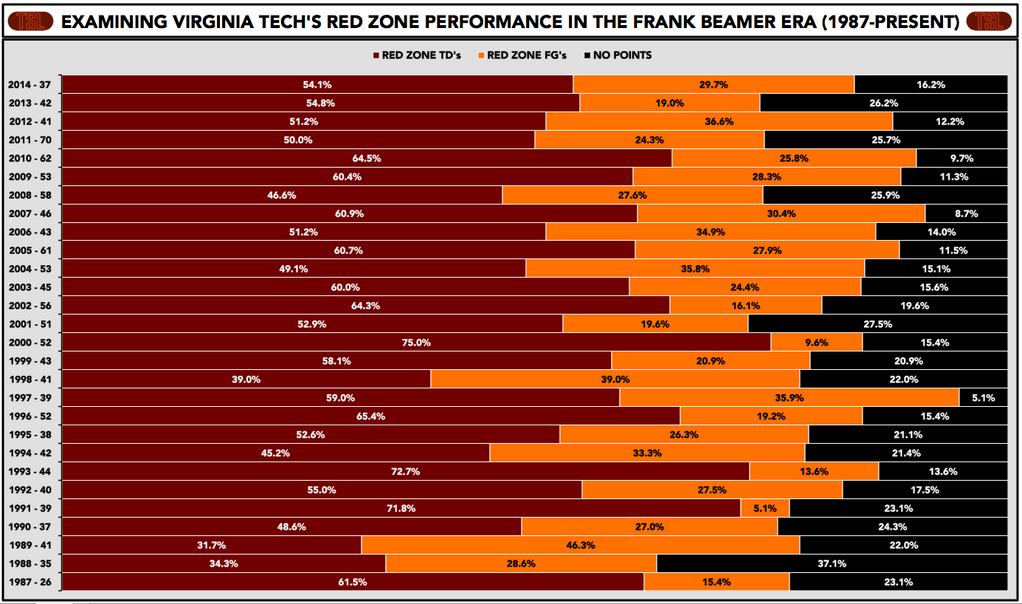 If the Hokies want to return to winning, several things need to happen for the offense: