Don’t look now, but basketball season is right around the corner.  The Hokies begin their season on Friday, November 14 against Maryland-Eastern Shore.  Today we’ll give you a look at Tech’s roster and possible starting lineups, and later this week we’ll go more in depth about the program and this particular team.

It’s no secret that the strength of this Virginia Tech team is at point guard and on the wing.  Joey van Zegeren returns to anchor the paint, but there is no true power forward and overall depth in the post is lacking.  Expect many guard-heavy combinations and starting lineups from Buzz Williams this season. 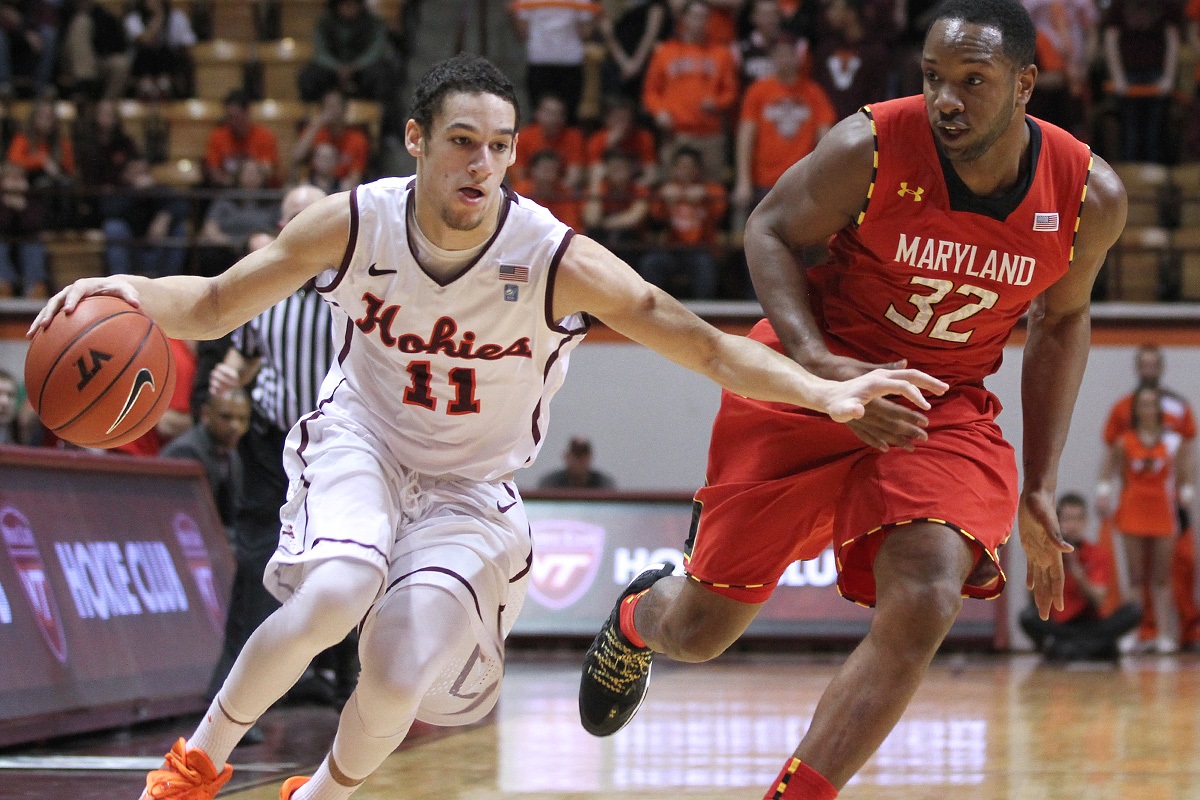 Returning starter Devin Wilson (6-4, 190, So.) is the only true point guard on this year’s team.  He was the surprise of last year’s freshman class, starting all 31 games and averaging 9.2 points, 4.8 assists and 3.2 rebounds per game.  Wilson had some big games over the course of the year…

He made the ACC’s All-Freshman team, which was totally unexpected considering he was not a highly-rated recruit.  Wilson showed the ability to get to the basket, and he was also Tech’s most energetic defensive player on the perimeter (25 steals).

Wilson needs to improve his shooting (37.3% overall and 31.1% from three-point range), or else teams will play off of him in an effort to keep him from getting to the basket.  As a player who draws a lot of fouls, he must also improve his free throw shooting (65.9%).

It’s likely that Wilson will lead the Hokies in minutes this year and handle nearly all the point guard duties.  Malik Muller (6-3, 220, r-Fr.) is the other point guard, though Buzz doesn’t consider him a true point.  It’s very possible that Muller will find himself in the starting lineup at one of the wing spots.  More on that later. 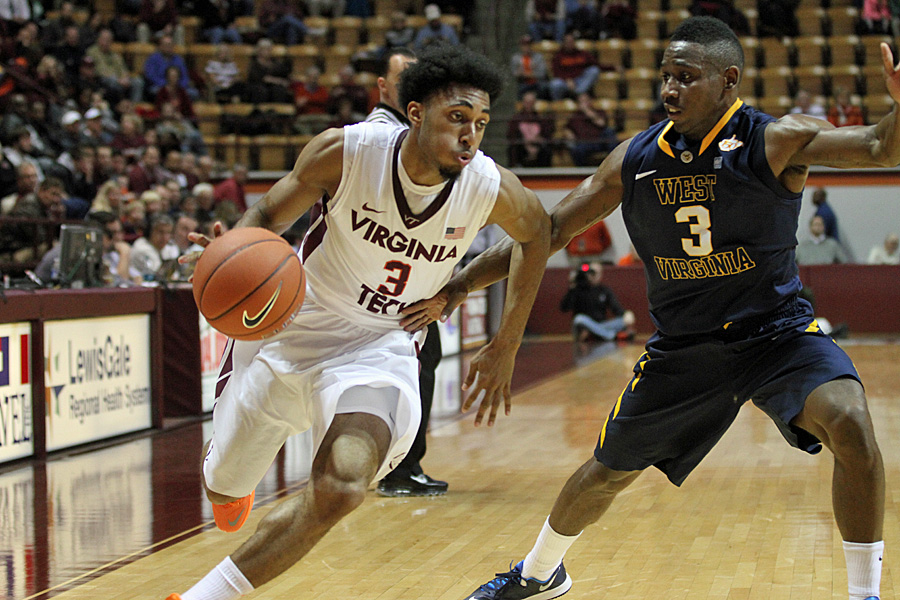 I’m expecting three wings to start for the Hokies in most games this year.  Here are the options…

Adam Smith (6-1, 170, r-Jr.): Smith showed a real scoring knack in his limited time last year by averaging 11 points per game. He scored 19 against West Virginia and 27 against Michigan State, so he usually reserved his best nights for Tech’s best opponents.  Unfortunately he was shut down by a rash of injuries, but if he can stay healthy this year he can be one of Tech’s top scoring threats.  Defensively, I would expect him to guard the opponent’s smallest player, matchups pending of course.

Malik Muller (6-3, 220, r-Fr.): The German import had to sit out last season.  Recruited as a point guard, he is likely to see time on the wing and at point for the Hokies this season.  He has been a member of the German National Team since 2009.  Buzz Williams said on Tech Talk Live on Monday that he has been impressed with Muller’s play thus far.  His size and strength will be an asset offensively against smaller guards, but how quick are his feet on the defensive end?

Justin Bibbs (6-5, 220, Fr.): Bibbs played for the #1 high school team in the country at Montverde Academy in Florida.  He will see time at the 3 and the 4 spots, and although he’s certainly not a power forward, right now he is probably Tech’s top player at the 4 spot.  As a member of a back-to-back National Championship team in high school, he is used to playing against top competition every day.  Bibbs came in at a higher weight than I expected, and he already looks like a wing who has been in a college program for a couple of seasons.

Ahmed Hill (6-5, 195, Fr.): Hill was the highest-rated recruit of this class. He originally signed at Marquette, but followed Buzz Williams to Virginia Tech.  He has a variety of skills, and his natural position is shooting guard.  He is battling the other wings for a spot in the startling lineup.  HIll is a very athletic player, and has to continue working on his shot.

Jalen Hudson (6-5, 195, Fr.): Hudson is originally from Richmond, where he attended Benedictine High School, though he played for St. Vincent-St. Mary in Ohio his last two years.  Like Hill, he is expected to see action at shooting guard and small forward.  I’ve heard good things about Hudson from someone who has seen him play during the preseason.

Will Johnston (6-4, 225, Sr.): Will Johnston returns for his senior season.  He is a three-point specialist, and he can see time at any of the wing spots for the Hokies.  Because he’s Tech’s bulkiest wing (along with Bibbs), he could also see time at the 4 spot when the Hokies are in their 4-guard lineup.  Johnston was one of Tech’s most improved players a year ago, and he should have a role again this season. 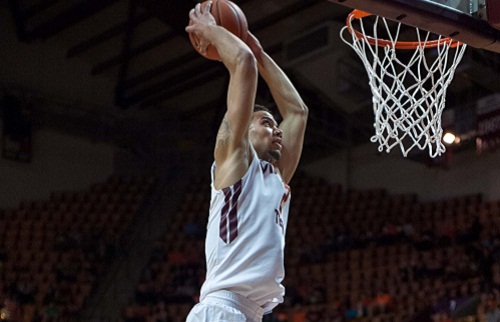 Virginia Tech lacks bodies in the post in a big way.  They also lack a true power forward.

Joey van Zegeren (6-10, 235, r-Jr.) showed remarkable improvement between his r-freshman season and his r-sophomore campaign.  He averaged 6.4 points, five rebounds and blocked 53 shots.  He was playing his best basketball at the end of the season, with a 14 point/9 rebound effort against Maryland, and a 21 point/7 rebound game against Georgia Tech.

The more van Zegeren played, the more comfortable he looked on the court.  Primarily just a dunker and shot blocker at the beginning of the season, he had developed a workable back to the basket game by the end of the year.  If van Zegeren can improve his hands, he can be a viable frontcourt scoring option for the Hokies.  I’d also like to see him improve his rebounding numbers, as nobody else on this team has the size to pull down a ton of boards.

Backing van Zegeren up at center will be Satchel Pierce (7-0, 255, Fr.).  Pierce (Paige is his middle name for you baseball fans) is a true center who was heading to Marquette, but chose to follow Buzz Williams to Virginia Tech.  He is a very raw player, and though he’ll have to play this year because of depth issues, he has a ways to go, like most 7-0 prospects these days.

As far as power forwards go, here are Tech’s options…

Shane Henry (6-8, 190, Jr.): Notice that Henry weights less than almost every wing on Virginia Tech’s team.  He is an athletic player with plenty of energy, and he led his JUCO conference in blocks per game (4.7) and rebounds (12.5).  Because of his size and lack of strength, he is not likely to be much of a threat with his back to the basket.  I believe his initial role for the Hokies will be as an energy player off the bench.  Hopefully he can add a lot of muscle mass with David Jackson before his senior season.

Christian Beyer (6-7, 220, Sr.): The walk-on has played major minutes the last two seasons, and he has proven to be one of the most natural rebounders on the team.  He has a nose for the basketball and a good hoops IQ, though he lacks size and overall athletic ability.  At this point it’s unknown exactly how Beyer will fit in Buzz’s rotation plans this year.

One proven player, one raw freshman, one JUCO who lacks size and strength, and one walk-on…that’s the frontcourt that Buzz Williams has to work with this season.  As a result, we can expect to see a number of 4-guard/wing lineups this year.  Greg Donlon (6-8, 230, Jr.) is another walk-on, but he is unlikely to see any important minutes.

Obviously that could change any day, as Buzz Williams is still getting a feel for what is an entirely new group of players for him.  However, if Saturday’s scrimmage is any indicator, that group above would represent the starting lineup if the season began tomorrow.

Other possibilities are Ahmed Hill and Jalen Hudson at either the 2 or the 3.  Shane Henry is also a possibility, though he is probably better suited to playing 15 minutes per game as an energy guy off the bench.

That’s not an ideal starting lineup, from a height standpoint.  However, you have to get your best five guys on the court, and considering the Hokies don’t have a true power forward, a 4-guard lineup is definitely the way to go at this point.

Today’s article has been a simple primer on Tech’s personnel.  Later this week, we’ll return with a more in-depth preview about the team and program in a TSL Pass article.