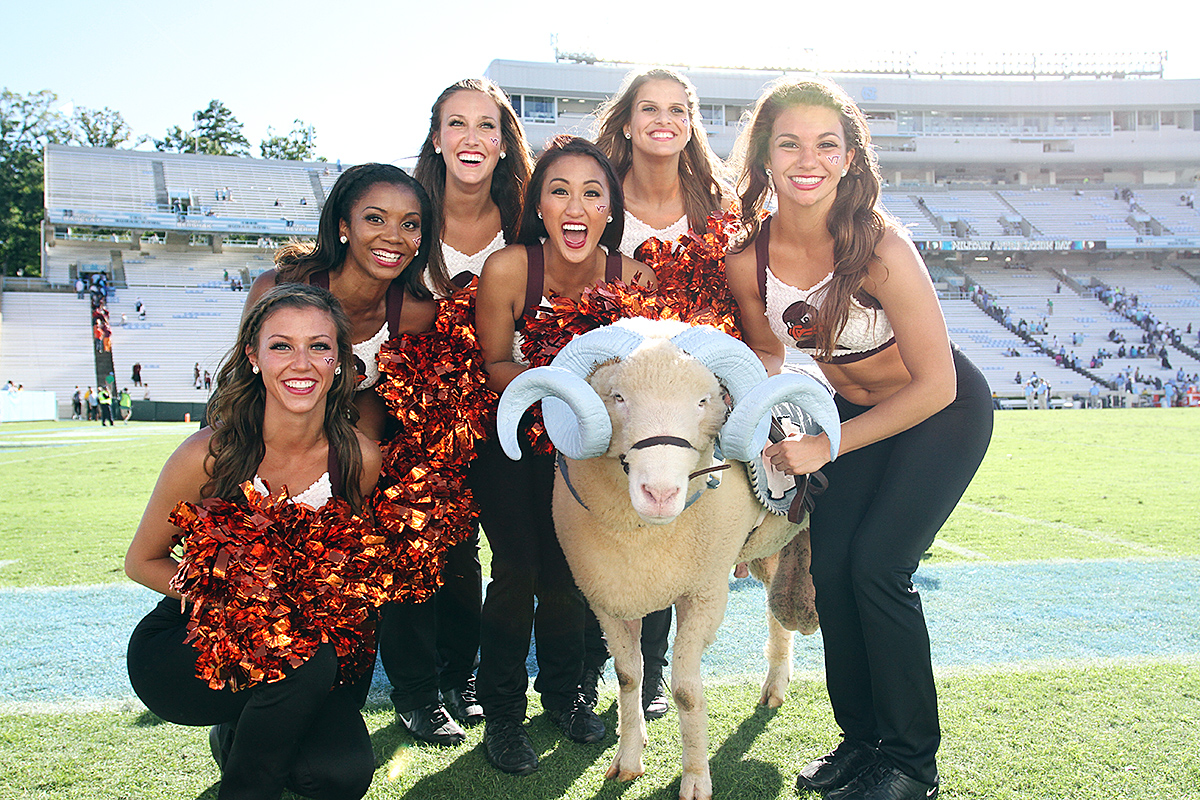 Tech’s first score against North Carolina took 44 seconds – slightly slower than last week’s eight-second explosion against Western Michigan – and it jump started the offense to a point where even a midgame offensive drought would not be enough for the Tar Heels to come back.

The Hokies led by two scores after their first two offensive drives en route to a 34-17 win over UNC. The win bumps Tech (4-2, 1-1 ACC) out of the basement of the ACC and makes it as much of a contender as anyone else in the muddled Coastal Division.

“I think we’re in it,” head coach Frank Beamer said. “Georgia Tech has to lose, but, I’ve said this before, this side is really balanced. So we just have to keep proving ourselves, get better and see what happens at the end.”

The first-play sack was just the opening act of a monster performance by Ekanem, who finished with six tackles (four for a loss), three sacks and the forced fumble in what was statically his best game as a Hokie.

“I was feeling good going into it, and I knew they were pretty pass heavy,” Ekanem said. “The guy I was going against, he boxed pretty quick at the line, so that just invited me to power him back into the quarterback, so that’s how I applied a lot of pressure.”

The defense as a whole was strong all game, limiting the Heels to 2-for-13 on third downs, and 323 total yards.

After surrendering a 64-yard drive but holding quarterback Marquise Williams and the Tar Heels’ offense to a field goal, Tech went right back to the running game.

Williams and Trey Edmunds, who played an increased role because of the injury last week to Shai McKenzie, shared seven carries and quarterback Michael Brewer tossed in one run of his own amongst four passes as the Hokies marched 82 yards in 5:33 to extend the lead to 11.

“It’s good,” Beamer said, referring to the fast starts, “but I just want to keep going. That’s where as a football team you look at this thing, when you’ve got them a little bit, keep going. And don’t even give them a chance to get back in the game.”

But after the burst out of the gate, the Hokies’ offense had trouble maintaining any sort of sustainable ground attack.

After rushing for 52 yards in the first quarter, the Hokies gained 36 yards on the ground combined in the second and third quarters, in part because of an offensive line that had trouble creating push in the trenches for much of the game.

“I think there were a lot of people in the box and we didn’t get them all blocked,” Beamer said. “And we probably didn’t have a guy for some of them. I think it’s kind of the strategy you go with.”

Still, the Hokies were able to run the ball 57 times and maintain possession for 41:03, the second most under Beamer.

But the offensive nadir wasn’t the mid-game offensive doldrums or even the six false start penalties against Tech’s offensive line. The low point for the Hokies came in the second half when both Williams and Edmunds were forced from the game for good because of injury.

Edmunds’ injury happened on his final carry of the game, a 26-yard run early in the fourth quarter along the left sideline when he had nothing but green field in front of him. Instead of taking the ball all the way and extending what was then a 14-point Hokies lead, he slowed down, grabbed his right shoulder and ducked out of bounds.

X-rays confirmed Edmunds, who recently returned to the offense after breaking his leg last season, fractured his right clavicle. While his specific timeframe will not be known until Monday, Hokies’ trainer Mike Goforth said the injury usually takes six-to-eight weeks to return from.

Only a few plays before Edmunds went down, Williams left the contest with a sprained ankle.

Williams feared it was broken when it happened, but X-rays were negative. There is no timeframe on his return.

J.C. Coleman and Joel Caleb carried the load for the final quarter of play and had some success doing it  – they combined for 13 carries, 47 yards and a touchdown – but neither figured largely into the running game when the Hokies had all their backs available.

“I think maybe we have to think about (fullback) Sam Rogers a little more back there,” Beamer said.  “J.C. made a couple nice runs. Joel Caleb came in here. I thought he had the best week of practice last week that I’ve seen him have. He looked faster to me and the whole deal. We’re having trouble keeping those guys healthy, but that’s part of it.

“I thought both of them ran the ball hard, held on the to the football. Both of them popped out of them there a couple times. Joel, he’s a guy, this is his opportunity and I firmly believe he’ll make the most of it.”

Late in the second quarter with the Hokies already ahead 17-3, cornerback Kendall Fuller jumped a pass thrown by second-string quarterback Mitch Trubisky. Kendall became the fourth Fuller brother to score for the Hokies when he returned it 47 yards to the military appreciation-themed end zone.

“That was film study, it was splits by the receivers, it was the coverage we were playing, but yeah, we were anticipating that double-slant,” defensive coordinator Bud Foster said. “It worked out. They had the young kid at quarterback, he pulled the trigger and Kendall stepped right in front. It was just picture perfect when it was all said and done.”

The Tar Heels scored 14 fourth quarter points, seven of which came easily after Michael Brewer’s 11th interception on the year gave them the ball on Tech’s 16 yard line, and came as close as 10 points down with 4:13 remaining in the game.

But when Coleman found pay dirt from one yard out with less than 2:30 in the game, Hokies ensured they’d start their bye week on a good note.

“Number one, we’re going to do some recruiting, and that’s critical for us,” Beamer said. “Got to keep adding. We have a lot of young guys out there playing right now. We got to add to that. I think we’re on our way to doing that.

“But then you get a little time off and then work on some things, I think it’s a good time (for our off week), and rest up. Get our kids away from us for a little bit. And get us away from them.”

• The opening score extended Tech’s school- and ACC-record scoring streak to 249 games, the 11th-longest streak in FBS history and the fifth-longest active streak.

• Redshirt freshman tight end Bucky Hodges has scored in five of the six Tech games. The freshman has four touchdowns and a two-point conversion.

• Sophomore Kendall Fuller registered his first interception of the year in the second quarter, returning it 47 yards for his first collegiate touchdown. It was the seventh interception of his young career. He finished with four tackles, an interception and two pass breakups.

• Freshmen Bucky Hodges (redshirt) and Isaiah Ford (true) both have four touchdown catches. The school record for touchdown receptions in a season from a freshman is five, by Josh Hyman in 2004, who did it as a redshirt freshman. Ford’s four scores are the most by a true freshman.

• Ken Ekanem had a career-high 3.0 sacks and 4.0 tackles for loss, in addition to a forced fumble. The last Tech player to have three sacks in a game was Dadi Nicolas last season against Pitt.

Game infographic, thanks to OXVT! 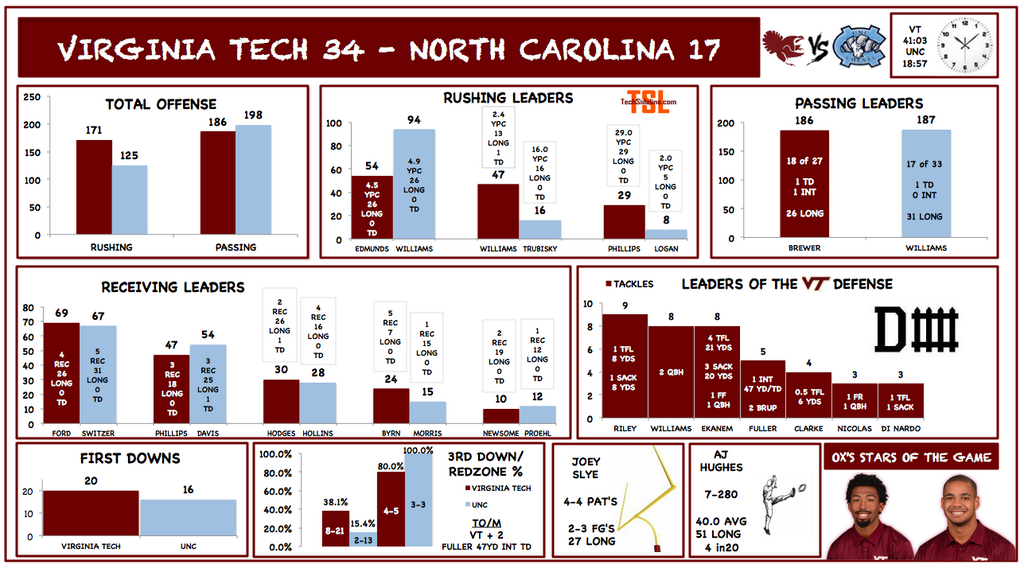