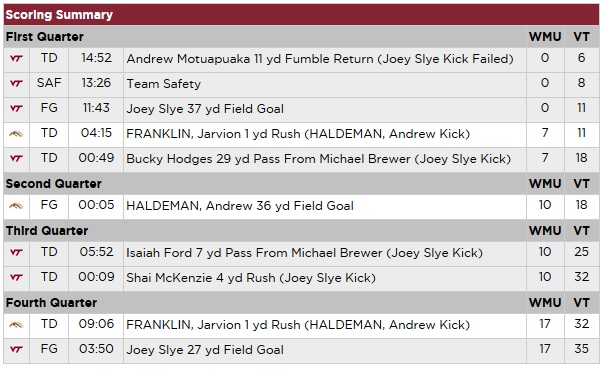 After a rocky first half, especially offensively, the Hokies got the ground game going and pulled away from Western Michigan for a 35-17 win in Blacksburg.

This game was tight for much of the first half, and the Hokies led just 18-10 at half time. But in the second half, the Hokies got the running game going, rushing for 227 yards after the break. Tech outscored WMU 14-0 in the third to take control, then cruised to the win.

“Our football team took a step today,” Tech head coach Frank Beamer said in his postgame press conference. “In the second half particularly, there were some holes there. I thought our offensive line got better. Moving the football. I still think we’re a work in progress.”

The Hokies had 308 yards rushing on the day, their most rushing yards since 317 yards against N.C. State in 2010. Marshawn Williams carried the ball 14 times for a career-high 119 yards, the first time a Tech tailback has gone over a hundred yards against an FBS opponent since last year’s Marshall game, and Shai McKenzie carried 18 times for 87 yards and a touchdown.

“We felt like our tempo was starting to catch up with them and they were starting to get tired,” Tech quarterback Michael Brewer said, “which was good. I thought that this was probably our best game as far as playing fast consistently in the tempo offense. You saw what it did in the second half. It wore the defensive line out and were able to get big yards in the running game.”

McKenzie suffered an injury late in the game and was diagnosed with a sprained knee. Frank Beamer said in his post-game press conference, “I think we may have lost him. That’s tough.” McKenzie will be examined Sunday to determine the full extent of the injury.

“It was bad,” Williams said. “I knew he was hurt when I went over there and saw him and looked at his face.”

Brewer completed less than 50% of his passes for the first time this season, and he also threw two more interceptions, both in the first half, one of which led to an easy touchdown for Western Michigan. Brewer was 14-of-32 for 178 yards and two touchdowns, including a 29-yarder to Bucky Hodges and a 7-yarder to Isaiah Ford. The Hokies were led in receiving by Hodges, who had four catches for 88 yards and a touchdown.

Defensively, the Hokies held Western Michigan to just 231 yards and ten first downs. The Hokies limited WMU tailback Jarvion Franklin, who was averaging 180 yards a game, to 76 yards on 15 carries. Chase Williams led the Hokies with 9 tackles and 2.5 tackles for loss, and Detrick Bonner registered Tech’s first interception since the Ohio State game. WMU quarterback Zach Terrell was 18-of-32 for 212 yards, one interception, and no touchdowns.

The Hokies stuffed WMU’s rushing game, limiting the Broncos to 19 net yards on 24 carries. That included five sacks by the Hokies for 24 yards in losses.

“If you can eliminate the run game,” Tech defensive coordinator Bud Foster said, “you can make them one-dimensional. I think we were pretty good on third down, particularly early, and that’s kind of the key.”

This one got off to a bang for the Hokies, when WMU kickoff returner Donald Celiscar was hit by Tech’s Ronny Vandyke on the opening kickoff and fumbled. Tech reserve linebacker Andrew Motuapuaka scooped the ball up on the 11 yard line and scored, just eight seconds into the game.

The score was the quickest in Virginia Tech football history, of course. The extra point was blocked, and Tech led 6-0 with 14:52 to go first quarter.

Western Michigan gifted the Hokies with two more points just four plays later. The Broncos lined up to punt on their own 25 yard line, only to snap the ball over punter J. Schroeder’s head. Schroeder chased the ball to the back of the end zone, where it rolled out and gave the Hokies an 8-0 lead with 13:26 to go in the quarter.

Tech took possession after the safety, and spurred by a 42-yard run by Marshawn Williams, drove 46 yards in 6 plays. Joey Slye finished the drive with a 37-yard field goal to put Tech up 11-0.

Neither team could move the ball for a few possessions after that, but Western Michigan got a break when Michael Brewer threw an interception on the Tech 42 yard line that Ronald Zamort returned all the way to the Hokie three yard line.

Western Michigan scored three plays later when freshman running back Jarvion Franklin dove over the pile from one yard out to make it 11-7, Hokies, with 4:15 to go in the quarter.

That was Brewer’s fourth straight interception without a touchdown pass, dating back to the start of the Georgia Tech game, but Brewer broke that streak late in the first quarter when he hit tight end Bucky Hodges for a 29 yard touchdown pass. The defender fell down on the play, and it was an easy pitch and catch by Brewer and Hodges.

The first quarter ended with Tech holding an 18-7 lead. That held up for most of the second quarter, in which both teams struggled to move the football. The Hokies got some traction late in the half, when Detrick Bonner picked off a sideline pass by Zach Terrell at the WMU 49 yard line. On the strength of a 13-yard completion to Joel Caleb and a roughing the passer penalty, the Hokies moved it to the WMU 21, but a long pass to the end zone intended for Isaiah Ford was picked off by Celiscar with 1:07 to go in the half.

WMU surprised the Hokies by driving 61 yards in just seven plays. They booted a 36 yard field goal by Andrew Haldeman with five seconds left in the half to make it Hokies 18, Broncos 10 at half time.

In the third quarter, the Hokies took control with a pair of drives totaling 11 plays, 80 yards, and 9 plays, 68 yards. In the first drive, the Hokies ran ten straight times for 73 yards, then Brewer finished it off with a 7-yard fade route to Isaiah Ford.

In the second drive, the Hokies converted two third downs on Michael Brewer’s arm, and Shai McKenzie finished it off with a four-yard TD run off the right side, nearly untouched for the easy score.

That sent the Hokies to the fourth quarter with a 32-10 lead. Western Michigan scored using an 8-play, 84-yard drive, finished by a 1-yard run by Franklin, and the Hokies responded with a 27-yard field goal (9 plays, 65 yards) for the final margin of 35-17.

Beamer: “I hope when we look at it, it was us wearing them down a little bit. We’ll go back and look at it, but I’m glad to see it. Regardless of how it happened, I’m glad to see some cracks there and guys running down the field and then being able to fake and get some throws off after you have the play-action pass going.”

Willie Byrn: “At the end of the game when I think we had 296 and everyone was like, ‘Hey, let’s get one more run. We got to get to 300.’ That’s a pride thing, and to be able to do that is very exciting. And that’s something to go into ACC play excited about, both as o-lineman and receivers.” 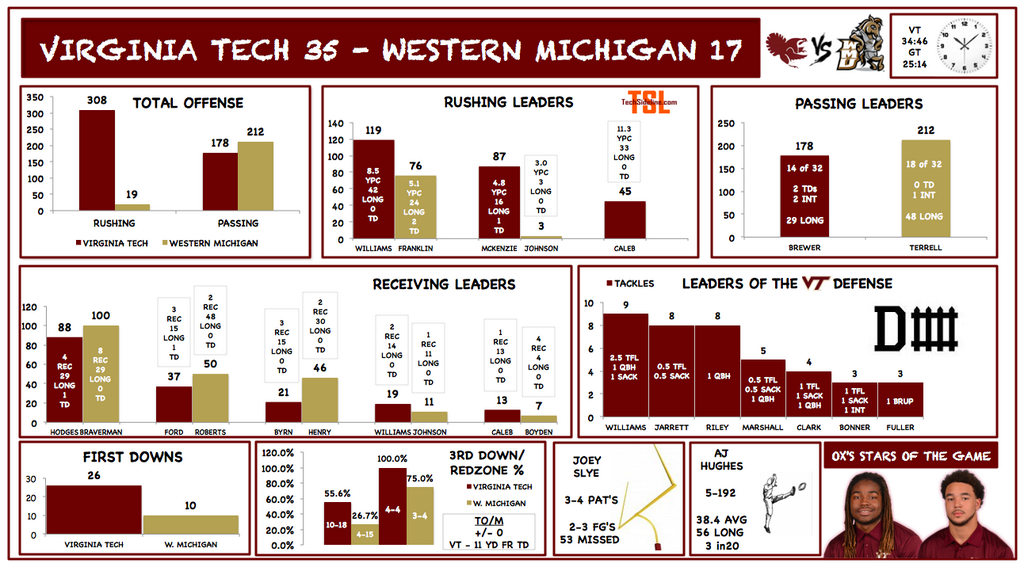 • Luther Maddy (knee) did not dress after having surgery on Tuesday. It broke a 19-game start streak for the senior defensive tackle. Der’Woun Greene made his first collegiate start, coming in place of Kyshoen Jarrett (coach’s decision). Jarrett’s streak of 30-straight starts was snapped with him not starting.

• Kyle Chung and Curtis Williams dressed for the first time in their careers Saturday. Neither played in the first game.

• Andrew Motuapuaka scooped up a fumble on the opening kickoff and scored just 8 seconds into the game. It’s the fastest Virginia Tech has ever scored under head coach Frank Beamer, topping a touchdown 18 seconds into the 1999 game against Rutgers when Michael Vick connected with André Davis on a 74-yard pass.

• Motuapuaka’s fumble return for a score is the first by the Hokies since Orion Martin did it against Boston College in the 2008 ACC Championship Game.

• When Western Michigan scored in the first quarter, it marked the first time in four contests the Broncos have scored against the Hokies.

• Detrick Bonner recorded his seventh career interception late in the second quarter. He is the career leader among current players, breaking a tie with Kendall Fuller (6).

• True freshman Isaiah Ford hauled in his fourth touchdown pass of the season.

• The last time Virginia Tech rushed for 300 or more yards was in 2010 when the Hokies ran for 317 yards against N.C. State. The 308 yards rushing are the most under Scot Loeffler as the Hokies’ offensive coordinator.

• Marshawn Williams broke the 100-yard plateau in rushing on Saturday, running for a career-high119 yards on just 14 carries (8.5 ypc).

• Daniel Braverman finished with 100 yards receiving, marking the third-straight game an opposing receiver has topped the century mark against the Hokies. Georgia Tech’s DeAndre Smelter (101) did it last week and ECU’s Cam Worthy (224) did it the week before.

• Freshman running back Shai McKenzie suffered a sprained right knee. He will be re-evaluated on Sunday.

Jacob Emert contributed to this report.