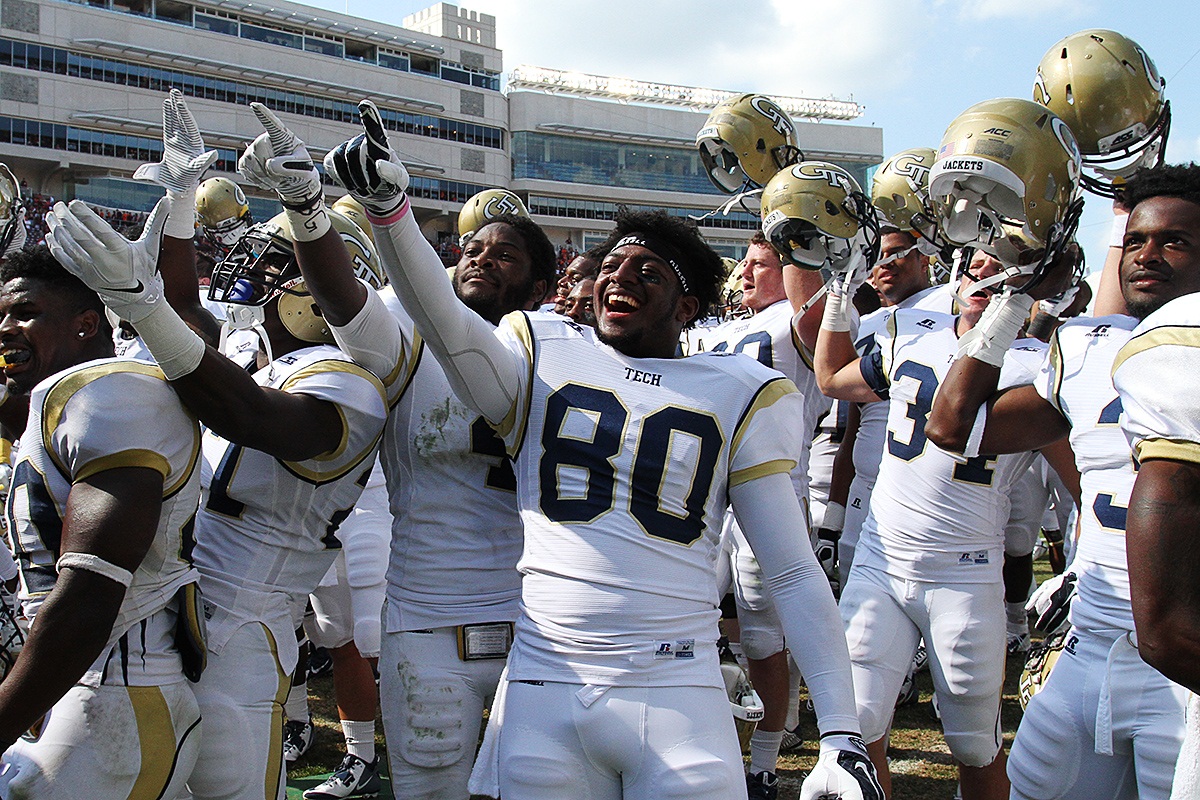 What a difference two weeks can make.

Fourteen days after beating Ohio State on the road in one of the biggest wins in program history and earning a top-20 national ranking, Virginia Tech has dropped to 2-2 and 0-1 in the ACC after a pair of losses.

The latest, a 27-24 loss to Georgia Tech in the conference opener for both teams, came after the Hokies led for most of the game.

After allowing a touchdown with just over two minutes left in the fourth quarter to tie the score  at 24, Virginia Tech’s defense was forced right back on the field after quarterback Michael Brewer threw his third interception of the game on the first play of the potential game-winning drive.

Georgia Tech (4-0, 1-0 ACC) quarterback Justin Thomas ran for 20 yards and threw for 19 more as the Yellow Jackets worked inside the Hokies’ five yard line. Harrison Butker made good on a 24-yard attempt as time expired.

The Hokies have lost four consecutive home games against FBS (formally Division 1-A) opponents for the first time since 1978-79.

“I just told the guys we’re just not playing Virginia Tech football right now,” Hokies head coach Frank Beamer said. “We’re not doing the things we know how to do, have done, should do. I don’t think it’s effort by any stretch of the imagination. We have to do some things and so forth. We’ve got to look at how we do things and so forth. And then we got to step up and make plays when we need to.”

“We got the ball back with a little over two minutes left. We had an opportunity to go down and win the football game,” Brewer, who has eight interceptions and seven touchdowns on the year, said. “The corner baited me into throwing the corner route. He dropped underneath it. That was a pretty critical point of the game. We don’t throw that interception and we have a chance to drive it down there and win it.”

For much of the game, Brewer was successful and in-sync with his receiving corps. He finished 28-for-39 for 297 yards, but also had those three interceptions. Now, one of the foremost qualities that won him the starting job in fall practice – the infrequency in which he turns the ball over – may have put his job in question.

While Beamer sidestepped a question about whether there is a quarterback controversy on the horizon, he admitted the situation and many others deserve another look.

“I think you look at the whole situation about where we are as a football team,” Beamer said. “There are a few things we need to look at as far as how we do things offensively, defensively, special teams.”

Justin Thomas ran for 54 of his 165 rushing yards on the game’s opening drive, but the Yellow Jackets were forced to settle for a Harrison Butker 43-yard field goal just the three-point lead.

The Hokies matched the Yellow Jackets’ field goal drive halfway through the first quarter, added three more points in the opening seconds of the second quarter and then put together a 10-play, 63 yard touchdown drive capped off by a Marshawn Williams 6-yard run.  At that point it was 13-3 Hokies, and things looked good for the home team.

Georgia Tech cut the lead to 13-10 with a touchdown however, and the Michael Brewer led the Hokies on a two-minute drive that resulted in a last second field goal before halftime. Leading 16-10 early in the second half, the Hokies missed a prime opportunity to extend their lead.

Georgia Tech’s first offensive drive of the second half ended in disaster after a errant backward pitch from Thomas was recovered by the Hokies on the Yellow Jacket 10-yard line.

However, a run for no gain, a substitution infraction (one of four against the Hokies), two incomplete passes and a blocked field goal left the lead at six points.

“Obviously that’s frustrating, any time you go down there and don’t come away with points,” Brewer said. “We got to get better protecting the football and minimize penalties.”

In the opening minutes of the fourth quarter with the score still 16-10 in Virginia Tech’s favor, Brewer threw his second interception of the game. This one, caught by Yellow Jacket’s linebacker Paul Davis, was returned 41 yards to the end zone and put Georgia Tech ahead by one point.

On the very next drive though, lady luck was wearing orange and maroon. With the Hokies well into Georgia Tech territory, running back Marshawn Williams fumbled on a first-and-10 carry. Despite several diving efforts by players on both teams to come up with it, the football squirted away from every corralling effort.

Brewer, trailing the play, saw the ball bounce into his hands, and never breaking stride, carried it the rest of the way for the five-point lead.   He then threw a jump ball to tight end Bucky Hodges to convert on the two-point attempt and put Tech ahead by seven, 24-17.

But then, for the second straight week, Virginia Tech’s defensive backfield failed to slow the opponent’s air attack.

Six-foot-three DeAndre Smelter had four catches for 82 yards in the fourth quarter, including three for 64 yards on the game tying drive. The biggest came on fourth-and-15 when Smelter was wide open in the middle of the field and absorbed a Chuck Clark blow as he caught the ball to move the chains. Two plays later Smelter ran by defensive back Donovan Riley for a 31-yard score.

“I think we came out just as hard as we did against Ohio State,” cornerback Kendall Fuller said. “We treat every game the same. We treat every practice the same. We all come out and work hard. It’s just some days just don’t go your way. It’s those little things that you got to get better at.”

For the second time in two weeks, Brewer tried to orchestrate a heroic late fourth quarter drive – last week’s was successful, but the defense allowed a touchdown with just over a minute left. This time, it only lasted one play.

“You see (Brewer) making some great plays, some heady plays, intuitive plays, just all the kind of plays on third down,” receiver Willie Byrn said. “We know what kind of guy he is, and we know that it means a lot to him. The few mistakes he’s had, he’s in a position where it is highlighted a lot more than our mistakes. I had a few mistakes and y’all didn’t see it and it’s not as evaluated. He had a few, but everyone did. We have all the confidence in the world in him.”

After getting inside the five-yard line, Thomas moved the ball to the middle of the field and fell over to make the ensuing attempt even easier for Butker. With the final seconds ticking off the clock, Butker drilled his second field goal of the game, and the Yellow Jackets won 27-24.

The Hokies return to action next Saturday when they host Western Michigan.  Kickoff is scheduled for 12:30pm, and the game will be televised by The ACC Network.

• The Hokies had not lost home football games in back-to-back weeks since falling to Boston College and Cincinnati to start 1995 season before losing to East Carolina and now Georgia Tech in consecutive weeks.

• Woody Baron made his first collegiate start, coming in place of Corey Marshall (ankle) at defensive tackle. To combat the Georgia Tech offense, Kyshoen Jarrett slid to the whip linebacker spot and Donovan Riley started at rover. Chuck Clark got the start at cornerback alongside Kendall Fuller. For Riley, it was his first career start.

• True freshman Cam Phillips made his second collegiate start against Georgia Tech, but the first alongside true freshman Isaiah Ford. The last time Virginia Tech started two true freshman wide receivers in a game was in 2008 at North Carolina when Jarrett Boykin and Dyrell Roberts both started in the 20-17 win. In 2004, true freshmen Eddie Royal and Joshua Morgan started at No. 9 Miami. The Hokies won that game 16-10 to clinch the ACC title. Both Royal (San Diego) and Morgan (Chicago) are still playing in the NFL.

• Today was the 1,200th game in Virginia Tech football history.

• With the field goal in the first quarter, Virginia Tech has now scored in 247 straight games, extending its school and ACC record. The streak is the 11th-longest streak in FBS history and the fifth-longest active streak in the FBS.

• Joey Slye’s 42-yard field goal is a career long for the true freshman. He had three field goals in the game, a career high.

• Marshawn Williams scored his second touchdown of the season in the second quarter.

• Isaiah Ford became the first Tech player to hit the 100-yard plateau in receiving yards this year with his career-high 114 yards on a career-high eight catches.

• Eleven of the first 15 touchdowns on the season have been scored by freshmen (12 of 15 by underclassmen).

• The last time Virginia Tech lost on the final play of the game came in the 2012 Sugar Bowl when Michigan’s Brendan Gibbons connected on a 37-yard field goal to win the game in overtime. 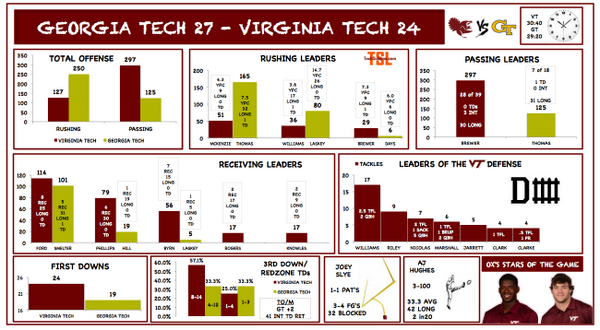