Virginia Tech controlled much of the first half against Georgia Tech, but surrendered a late TD drive to the Jackets in a close game between the ACC Coastal Division rivals. The Hokies lead 16-10 on the strength of three field goals by Joey Slye and a touchdown run by Marshawn Williams.

The Jackets had the ball first and got off to a good start offensively in this one, converting a 43 yard field goal by Harrison Butker. GT quarterback Justin Thomas ran 3 times for 54 yards on the possession to get the Jackets on the board.

The Hokies responded with a field goal of their own, 42 yards from Joey Slye, driving 46 yards in 10 plays.

After that, the Hokie defense buckled down and kept Georgia Tech under control for most of the rest of the half. Meanwhile, the VT offense had a sharp passing game but struggled to run the football, and that kept the Hokies out of the end zone. They did get another field goal Slye, a 33-yarder just nine seconds into the second quarter to take a 6-3 lead.

VT finally got in the end zone with 7:04 left to go in the half on a 6-yard run by Marshawn Williams. The touchdown came after a 17-yard run right up the gut by Williams, breaking a long streak of futility for the tailback rushing game to that point. VT led 13-3.

After a defensive stop, the Hokies had the ball again and were in control. But Michael Brewer threw an interception on what appeared to be a long throwaway, but a GT defender was in the area and picked it off.

GT took possession at their 30 with 3:24 to go in the half, and suddenly came back to life offensively, driving 70 yards in seven plays. Thomas ran it in from two yards out to make it 13-10, Hokies, with 57 seconds left in the half.

With all three timeouts left, the Hokies took over on their 25 and drove smartly down the field. Brewer completed six of seven for 56 yards, and Slye punched in a 36 yard field goal with two seconds left to give the Hokies a 16-10 half time lead.

Tech was led in rushing by Marshawn Williams, with six carries for 26 yards and a TD. Trey Edmunds returned to action and had two carries for 10 yards. The Hokie rushing attack was bottled up, though, with 18 carries for 47 yards (2.6 ypc). The Hokies gave up just one sack for eight yards.

Kalvin Cline returned to action but did not catch a pass, while fellow tight end Ryan Malleck did not play. Cornerback Brandon Facyson also did not play in the first half.

Jackets QB Justin Thomas led GT with nine carries for 90 yards and a TD. Thomas missed his first six passes, then completed his last three, going 3-of-9 for 42 yards.

The Hokies will get possession first in the second half, holding the 16-10 lead.

• The Hokies have not lost home football games in back-to-back weeks since falling to Boston College and Cincinnati to start 1995 season.

• Woody Baron made his first collegiate start, coming in place of Corey Marshall (ankle) at defensive tackle. To combat the Georgia Tech offense, Kyshoen Jarrett slid to the whip linebacker spot and Donovan Riley started at rover. Chuck Clark got the start at cornerback alongside Kendal Fuller. For Riley, it was his first career start.

• True freshman Cam Phillips made his second collegiate start against Georgia Tech, but the first alongside true freshman Isaiah Ford. The last time Virginia Tech started two true freshman wide receivers in a game was in 2008 at North Carolina when Jarrett Boykin and Dyrell Roberts both started in the 20-17 win. In 2004, true freshmen Eddie Royal and Joshua Morgan started at No. 9 Miami. The Hokies won that game 16-10 to clinch the ACC title. Both Royal (San Diego) and Morgan (Chicago) are still playing in the NFL.

• Today is the 1,200th game in Virginia Tech football history.

• With the field goal in the first quarter, Virginia Tech has now scored in 247 straight games, extending its school and ACC record. The streak is the 11th-longest streak in FBS history and the fifth-longest active streak in the FBS.

• Marshawn Williams scored his second touchdown of the season in the second quarter.

• Isaiah Ford’s 79 yards receiving at the half are already a career high for yards in a game.

• Eleven of the first 14 touchdowns on the season have been scored by freshmen (12 of 14 by underclassmen). 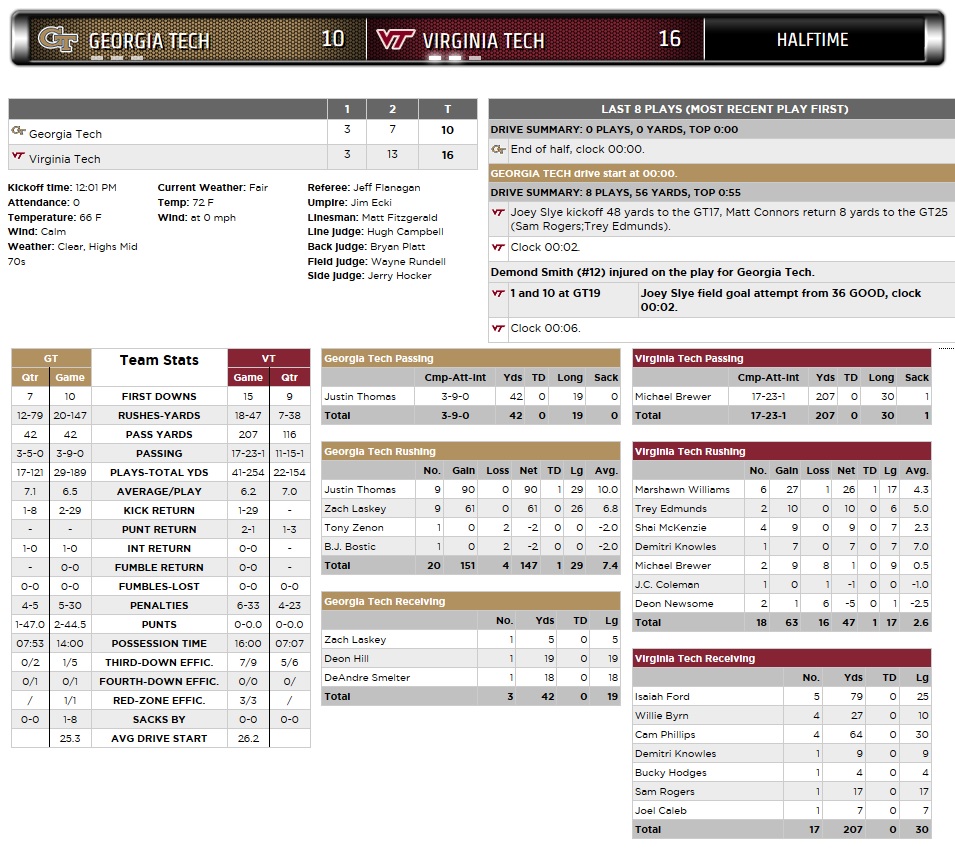