East Carolina’s Shane Carden scored on a QB keeper from one yard out with 16 seconds left, and East Carolina knocked off #17 Virginia Tech 28-21 in Blacksburg.

Virginia Tech fought back from an early 21-0 deficit against ECU to tie it up at 21 with 1:20 remaining, then gave up a 65-yard drive in just three plays to lose. After Cam Phillips caught an 18-yard TD pass from Michael Brewer to complete a stirring comeback, the Hokie defense, which hadn’t surrendered any points for over three quarters after a rocky start, collapsed and gave up the easy score.

After the tying score, ECU took possession on their 35-yard line and immediately hit a 31-yard pass to the Hokie 34. Tech committed a substitution infraction to move the ball to the 29, and Carden hit Cam Worthy on a slant pattern for a 28-yard gain down to the Hokie 1 yard line. Carden ran it in untouched from there over left tackle to complete the stunning win for the Pirates.

Tech’s Michael Brewer struggled for much of the day. He completed 30-of-56 for 298 yards and three TDs, but he also threw two interceptions, and the Hokie offense got off to a very slow start. Tech finished with 389 yards, but had just 14 yards and one first down in a critical first quarter that saw the Hokies fall behind by three scores.

ECU scored on three of their first four possessions to go up 21-0 with 2:44 left in the first quarter, and at the end of the quarter, ECU had outgained the Hokies 205 yards to 14. ECU’s scoring drives covered 20 total plays, 203 total yards, and took just 5:19 off the clock, as they simply blasted the Hokies early. 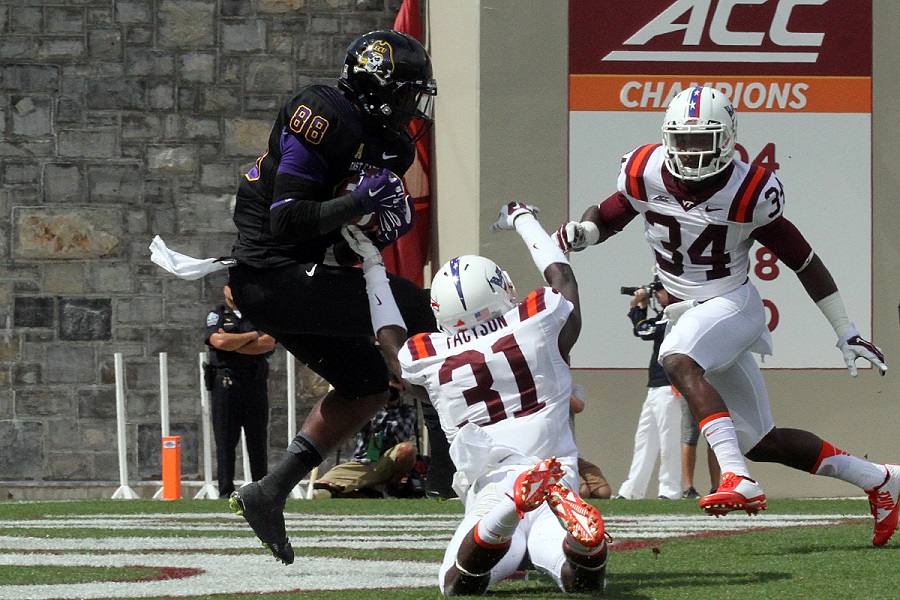 “I think they just beat us on a couple of deep balls,” Tech head coach Frank Beamer said. “I thought we had a chance to go up and get the interception, we were in pretty good shape. But again, give them credit. They got some receivers that go get it and that quarterback, I don’t think anyone throws it better than him. He put a lot of deep balls right on the money.”

“As good as we were last week playing the deep ball, we were equally as bad this week,” defensive coordinator Bud Foster said. “We had a good game plan. We just couldn’t make a play on a deep ball all day. They had a freakish play on their first drive that got things going” — ECU’s Bryce Williams caught a tipped pass on third down and converted it to a first down — “then they made a couple big plays.”

Tech flirted with even more disaster for much of the second quarter. ECU spent a lot of time deep in Hokie territory, and Brewer threw both of his interceptions in the quarter. Brewer was sacked twice in the first quarter and was clearly rattled, making several bad throws in the first half, including the interceptions.

ECU drove deep into Tech territory early in the second quarter, then went for it on fourth and two from the Tech 11 yard line and threw incomplete.

Three plays later, Brewer threw an interception that Josh Hawkins returned from the Tech 28 to the 24. On the very next play, Carden scrambled inside the Tech five-yard line, but backup defensive end Dwayne Alford knocked the ball loose from behind, and Kendall Fuller recovered at the Tech one-yard line.

Two plays later, Brewer threw another interception to Hawkins, who returned it from the 18 to the Tech 11.

“Obviously, we had to figure out a way to eliminate those turnovers,” Brewer said. “I know one of them was just an uncharacteristic throw, throwing back across my body on a scramble trying to make something happen when I should’ve just thrown it away. Second one, I thought the DB made a good play. I was a little bit late on the throw. Then again, that’s a credit to their defense.”

An ECU holding penalty on the play pushed the ball back to the 21-yard line, and ECU eventually missed a 37-yard field goal wide right.

Having weathered the storm, the Hokies finally got on the board with an 8-play, 73-yard drive late in the second quarter. Sam Rogers had a 50-yard touchdown catch and run called back when replay ruled that he stepped out of bounds on the 34-yard line. A few plays later, Isaiah Ford made a tough, 21-yard TD catch that stood up after replay review. It was 21-7, ECU, with 47 seconds left, and that was the score at half time.

“The fact of the matter,” offensive coordinator Scot Loeffler said of the slow start, “is we should have put this game away in the first half and we didn’t.”

For much of the second half, the Hokie defense throttled the ECU offense. In the third quarter, Tech ran 23 plays to ECU’s 8 and outgained the Pirates 78-13. Neither team could scratch on the scoreboard, however.

With 5:22 to go in the third, the Hokies embarked on a monster 15-play, 69-yard drive that lasted 7:31 and extended into the fourth quarter, but it came up empty. Facing fourth and goal from the ECU two-yard line, Frank Beamer elected to go for it, but there was a communication breakdown between Brewer and his receivers, and Brewer threw to an empty spot in the back of the end zone, turning it over on downs with 12:51 left.

The Hokies later drove 80 yards in 12 plays and scored on a 15-yard touchdown catch by Isaiah Ford, who struggled with drops on the day. Ford was wide open, and with 6:31 left, he secured the easy catch and it was 21-14, Pirates.

Tech’s defense got another stop, and the Hokies took over with 4:57 left on the 50. Brewer completed a five-yard pass to Ford on fourth and three, but a holding call on Laurence Gibson wiped out the play, and Tech chose to punt on fourth and 13 with 3:40 left.

After another three and out by ECU, in which the Hokies spent their remaining two timeouts, Tech took possession on the ECU 47 with 2:15 left, after a 23-yard punt return by Greg Stroman.

The Hokies scored easily, going 47 yards in six plays in 55 seconds. Brewer hit a wide-open Cam Phillips for an 18-yard tying score with 1:20 to go, and Lane Stadium was bedlam. 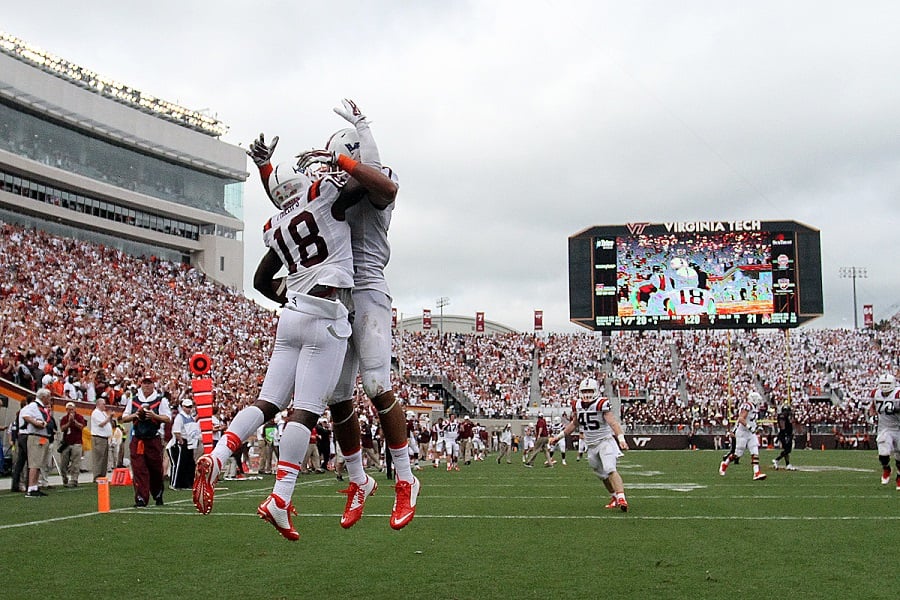 But in a harbinger of things to come, Joey Slye kicked the ball out of bounds, and ECU took over on their 35. Three plays later, the Hokies had suffered a crushing defeat after Carden’s one-yard run.

“I don’t like kicking it out of bounds and giving them field position to start with and I don’t like having too many guys on the field,” Beamer said. “I don’t like that one bit. They were good and we helped them.”

After starting out 5-of-16 for 59 yards and two interceptions, Brewer collected himself and went 25-of-40 for 239 yards and three touchdowns.

“(There’s) really no excuse,” Brewer said of his early struggles, “other than that they outplayed us in the first half. (In the second half) We were just able to get into a rhythm … I thought we were a lot better on first and second down, setting up some third-and-shorts. We just got into a better rhythm in the second half.” 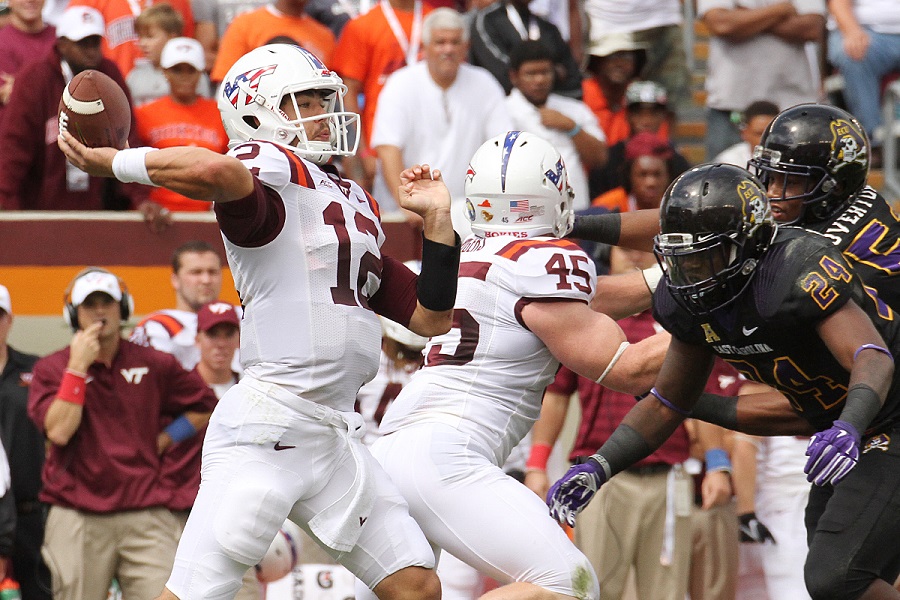 Were the Hokies suffering a post-Ohio State hangover? Was the slow start due to too much reveling in the OSU win?

“I’m not going to make that excuse,” Beamer said. “I thought we were ready to play. We understood exactly how East Carolina was going to play. It wasn’t secret … It just wasn’t a good start. I thought we had all the respect in the world for East Carolina. We knew what kind of team they were, and they just did a great job.”

Willie Byrn added, “That was one thing that we preached to our guys all week, was not taking a step back and not doing the thing that we did last year, which was play great one week and then fall down the next week.”

Isaiah Ford: “We didn’t (let down) at all. Our coaches prepared us. We knew what time it was. We knew how good they were, and so we didn’t overlook them. They just pretty much outplayed us.”

Chase Williams: “Honestly, the only thing that was going on was they were making good plays. The quarterback was putting the ball where the receivers can go get it and that’s exactly what their receivers were doing.”

If anything can be taken away from a game that started out as an epic disaster, it’s the resilience the Hokie players showed in mounting the comeback.

“It’s a terrible feeling to lose a game you should win,” Loeffler said. “But hopefully this is a great learning experience, and all our young guys rally together and get this thing right.”

“I’m more convinced than ever that we can really be a good football team.”

• Nigel Williams made his first collegiate start, coming in place of Corey Marshall (ankle) at defensive tackle. Tech opened in a nickel package with Chuck Clark getting a start as an extra defensive back.

• The only other time the Hokies gave up 21 points in the first quarter under Frank Beamer came in 2006 to Georgia Tech, a 38-27 loss. The Hokies had never trailed 21-0 after one quarter under Beamer prior to today.

• Isaiah Ford caught his second collegiate touchdown late in the first half to extend Virginia Tech’s ACC- and school-record scoring streak to 246 games. It’s the fifth-longest active streak in the FBS and the 11th-longest streak in FBS history. Ford finished with two touchdowns in the game, giving him three for the season.

• Ten of the first 13 touchdowns on the season have been scored by freshmen (11 of 13 by underclassmen).

• The 427 yards passing allowed are the fourth-most by a Tech defense under head coach Frank Beamer.

• The 224 yards receiving by ECU’s Cam Worthy are the third-most by a Tech opponent in school history. Syracuse’s David Tyree had 229 yards against the Hokies in 2002 and Ron Sellers of Florida State also had 229 yards, his coming in 1967.

• Saturday marked just the 15th time under Beamer that an opposing offense recorded 500 or more yards of total offense. The last team to do that was North Carolina in 2012 (533).

• Defensive end Ken Ekanem had a career-high 3.5 tackles for loss.

Jacob Emert contributed to this story 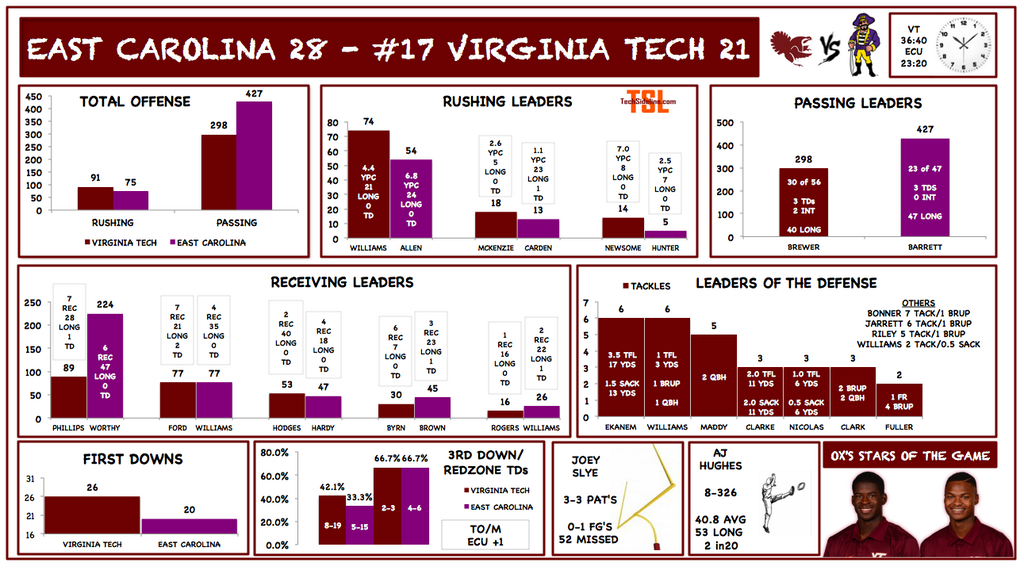