East Carolina, fired up and ready to play, blasted the Hokies with three touchdowns in their first four possessions to take a 21-7 halftime lead over the Hokies.

The Pirates opened with a 7-play, 75-yard TD drive to go up 7-0 on a 4-yard TD catch by Bryce Williams. Williams made his first two catches of the season on the drive, including the TD and a reception of a batted pass on third down.

At that point, Virginia Tech didn’t even have a first down, and the Hokies continued to struggle on offense for most of the first half. Tech’s first 25 plays netted just 30 yards, and though the Hokies’ defense kept the Pirates out of the end zone for the rest of the half, Tech spent most of the second quarter locked deep in their territory as they struggled to move the football.

ECU would have scored more, but in the second quarter they threw an incomplete pass on fourth and 2 from the Virginia Tech 11, and ECU quarterback Shane Carden fumbled inside the Virginia Tech five yard line after a 23-yard run, where Kendall Fuller recovered at the one yard line for the Hokies. ECU also missed a 37-yard field goal.

During that second quarter, VT quarterback Michael Brewer, who was sacked twice and hit repeatedly, threw two interceptions, one on the Hokie 28-yard line and one on the 18-yard line. The Hokies escaped because the fumble by Carden and the missed field goal followed those two interceptions.

With about six minutes left in the half, the Hokies finally flipped field position when Brewer hit tight end Bucky Hodges down the middle for a 40-yard gain. Until that point, VT had 26 plays for just 35 yards.

That drive ended in a missed 52-yard field goal by Joey Slye (it was long enough but was wide right), but one possession later, the Hokies finally struck gold on an 8-play, 75 yard drive. Sam Rogers had a 50-yard TD catch and run brought back when instant replay revealed he had stepped out on the ECU 34-yard line, but Tech persevered, and Isaiah Ford made a circus catch on a 21-yard pass from Brewer for the touchdown, with just 47 seconds left in the half.

Tech’s Corey Marshall did not dress for the game, and Nigel Williams started instead.

Virginia Tech will get the ball first to start the second half.

• Tech is trying to break a recent trend of losses after a big win. After wins against a ranked team, the Hokies have lost three of four times in their next game, most recently to Maryland last year after beating Miami.

• Nigel Williams made his first collegiate start, coming in place of Corey Marshall (ankle) at defensive tackle. Tech opened in a nickel package with Chuck Clark getting a start as an extra defensive back.

• The only other time the Hokies gave up 21 points in the first quarter under Frank Beamer came in 2006 to Georgia Tech, a 38-27 loss. The Hokies have never trailed 21-0 after one quarter under Beamer.

• The largest comeback ever under head coach Frank Beamer at Tech is 20 points, coming against Duke in 2012 when the Hokies trailed 20-0 in the first quarter. Tech came back to win that one 41-20. The largest second-half comeback under Beamer is 15 points against Virginia in 1995. Tech trailed 29-14 after the third quarter and rallied to win 36-29.

• Isaiah Ford caught his second collegiate touchdown late in the first half to extend Virginia Tech’s ACC- and school-record scoring streak to 246 games. It’s the fifth-longest active streak in the FBS and the 11th-longest streak in FBS history.

• Seven of the first 10 touchdowns on the season have been scored by freshmen (eight of 10 by underclassmen). 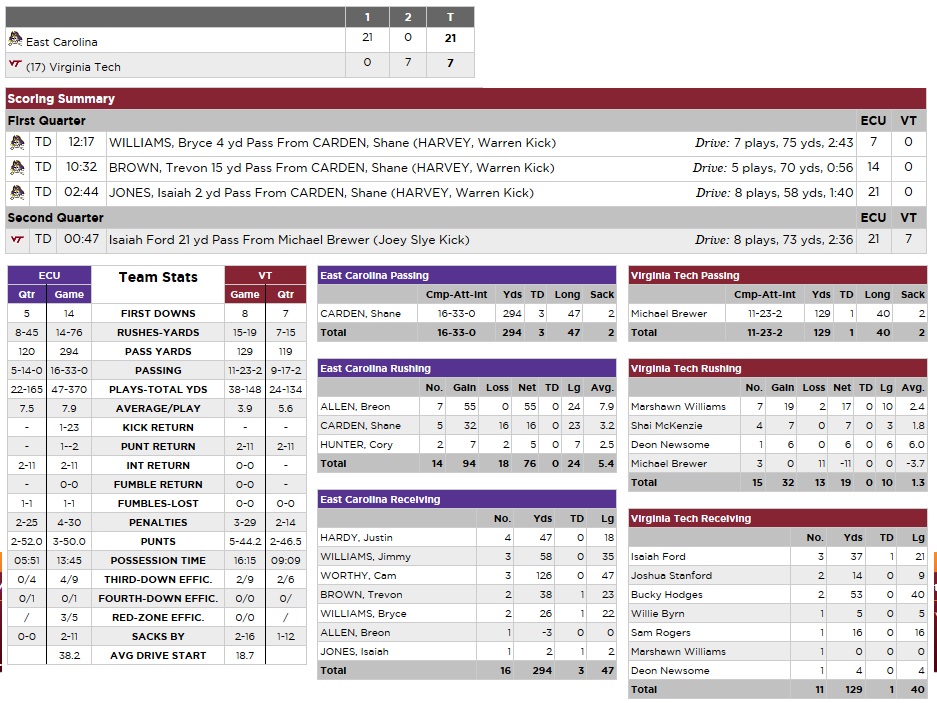