That’s a bold statement – but if you think its just hyperbole – then continue to read this article.

Over the last three decades, Virginia Tech’s golfers have won 38 tournaments.  In the 2000-2001 season, which featured current PGA pros Johnson Wagner and Brendon de Jonge, the Hokies won six tournaments, a school record.  This season (2013-2014), they’ve already won three times.  A college golf season is played in both semesters of the calendar year.

The Hokies have been to 13 NCAA Regionals, including the last seven in a row (2007-2013).  This season will make eight straight NCAA Regionals for the Hokies.  There are three regional tournaments (East Region, Central Region, and West Region), where 27 teams are selected to each region and the low 10 teams (30 total) make the NCAA Championship.  The Hokies have advanced to the NCAA Championship tournament six times.

Those golf titles all happened during the football team’s current incredible bowl game streak; of note, Beamerball, with seven conference championships during that span, is one shy of titles when compared to the golf team.

This year’s golf squad has four outstanding golfers at the top, but two classmates have really stood out.

Junior Scott Vincent, from Harare, Zimbabwe, carries the low average of 70.5 as he had a great autumn, winning individual honors three times.  And he’s once again on a hot streak, finishing 7th and 2nd in his last two starts.  Junior Trevor Cone, from Concord, North Carolina, is the other leader who has been on fire this spring.  Cone won both tournaments the Hokies played this past March and finished 7th in his last start.

Senior captain Bryce Chalkley, from Richmond, Virginia, is also playing great golf and has maintained a 71.46 average after an incredible autumn season of several Top 5 finishes.  Sophomore Maclain Huge carries a 72.81 average and has finished under par in three of the four tournaments in 2014.

The other members of the team are talented as well – Junior Miles Curley and three outstanding freshman with bright futures in Joey Lane, Ryan Mondy and Drew Johnson.

Suffice it to say, the above stats confirm the obvious: Virginia Tech is going to shoot under par as a team, it’s just a matter of how low. 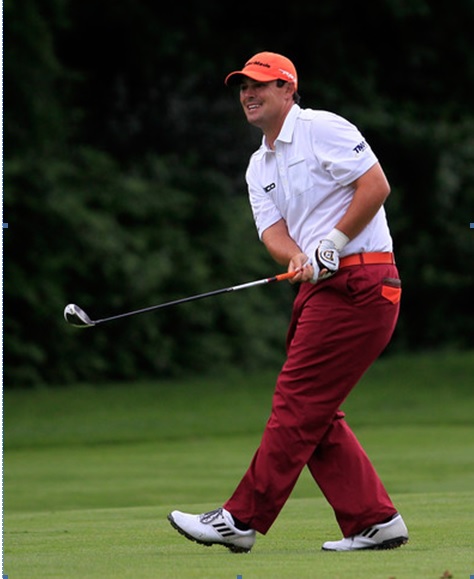 As mentioned, pros Johnson Wagner and Brendon de Jonge continue to celebrate their Hokie love while playing on the PGA tour.

Last year, in Johnson Wagner’s first appearance at the Masters, on the range with him was VT golf coach Jay Hardwick.  And check out the great outfit Johnson Wagner wore at The Greenbrier Classic this past July.  He was the leader going in to the final day but lost to Jonas Blixt.

This past summer, Brendon de Jonge (pronounced “di Young”) was selected by Captain Nick Price to play in The President’s Cup to represent the International Squad.  In the match play format, Brendon earned the respect of the world, especially when playing with partner Ernie Els. 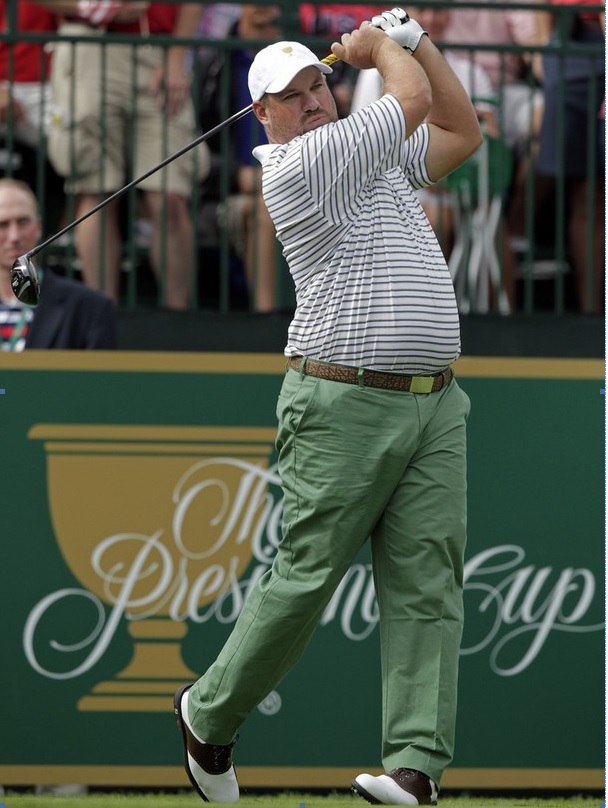 This year, in Brendon de Jonge’s first appearance at the Masters, again the former Hokie asked Coach Hardwick to join him at Augusta National.  To me, that says a lot about how those guys feel about their college coach.

But don’t take my word for it.  Johnson Wagner said as much when he was inducted in the Virginia Tech Hall of Fame last year.  Click here for Johnson’s words and all the up-to-date information on the Hokies.

You can go read Jay Hardwick’s bio for all of his accolades, but the bottom line is he is a local boy who has done himself proud.  Much like Frank Beamer, who grew up in Carroll County and started his career at Radford High School, Jay Hardwick is cut from the same cloth.  A Giles County native from Narrows, Hardwick played collegiate golf for the Hokies, lettered all 4 years, posted a 64-9 match play record and won three straight state intercollegiate championships.

Not only has he continued to turn the golf team into a national power, but he is the Director of Golf Operations at Virginia Tech, overseeing the Virginia Tech Golf Course and the Pete Dye River Course of Virginia Tech.  Suffice it to say, the incredible golf course and the new state-of-the-art practice facility for the golf team has helped create an atmosphere of winning for the golf team.  Hardwick made sure the Hokies had one of the finest practice complexes in the nation, and his record and recruiting reflect his desire to take the program to new heights.  If you haven’t checked out the Pete Dye River Course of Virginia Tech, you should.

One of the perks of membership at the course that Jay Hardwick orchestrated this past week was when this year’s golf team played along with members of the Pete Dye River Course.  It was a lot of fun and the best part was that it proved that Hardwick not only teaches his golfers how to play well, but he also teaches them how to be gentlemen and stewards of the game.

Nationally ranked and headed to the ACC Championship

The Hokies travel to New London, North Carolina to try and claim their 2nd ACC Title.  The tournament begins Friday and concludes Sunday.  The excitement for this year’s championship is clear.  The ACC is loaded in golf talent, and the Hokies are a big reason why.  The Hokies (ranked #11 in the nation) will be paired up with perennial power Georgia Tech (ranked #4 in the nation) and rival Virginia (ranked #10 in the nation) for the first round.  That will be some great competition as all three schools are having banner years and each will get to see up close how they handle the pressure of playing for the conference title.

And it is not just a three team race as Florida State, Clemson, and Wake Forest all have enough talent to win.  For more on the ACC Championship, click here.  You can follow the Hokies this weekend on the internet by clicking here.

For more on the NCAA Regionals and National Championship, click here.

I know Coach Hardwick and the team will appreciate your well wishes and praise as they try to finish off what has been an amazing season and what appears to be the new standard of excellence for golf at Virginia Tech.