Virginia Tech football hosted a good group of prospects yesterday for a Junior Day recruiting event. TSL will have updates with these prospects and more in the coming days and weeks, so stay tuned for those, but in the meantime here is some initial reaction and news from the weekend…

The 6’4”, 235-pound Fullwood recently named Ohio State as his favorite. How the Tech trip has changed things remains to be seen, but any time you get a prospect on campus there is a chance. 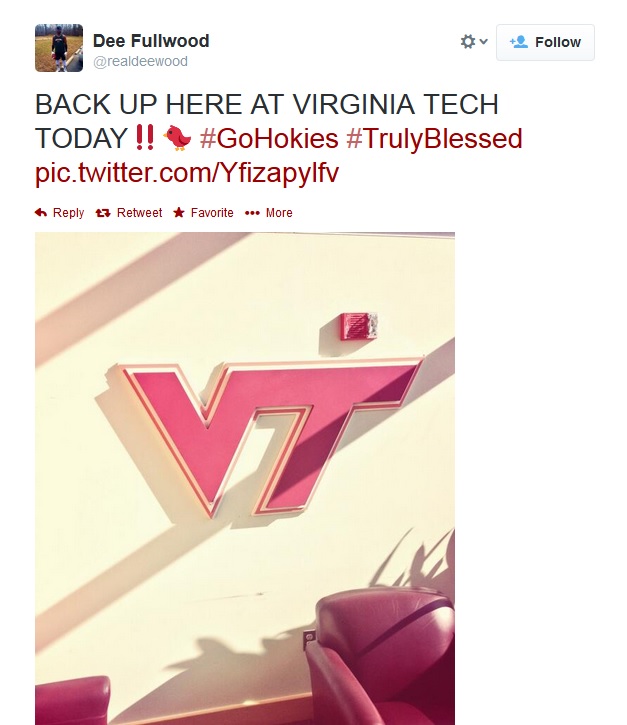 Charlotte Christian (Charlotte, N.C.) class of 2015 center prospect Brian Chaffin enjoyed his latest visit to Tech. This was the second trip to Blacksburg this year for the talented prospect, who boasts scholarship offers from Virginia Tech, Boston College, Duke, North Carolina, N.C. State, Northwestern and Wake Forest, among others.

Chaffin, a 6’2”, 280-pound prospect, has already been selected to play in the 2015 Under Armour All-American Bowl. 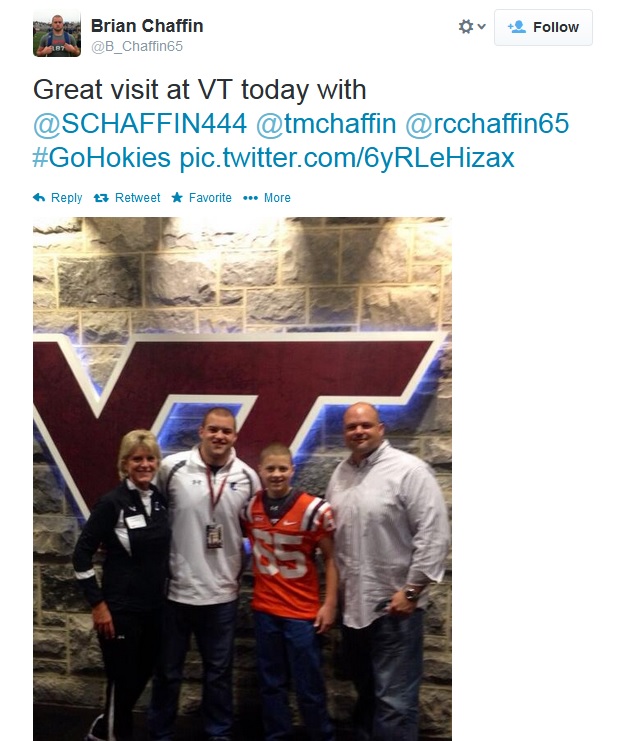 Gage Cervenka, a defensive tackle prospect out of Emerald High School in Greenwood, South Carolina, received a scholarship offer from Virginia Tech on Saturday. The 6’3”, 275-pound rising senior also boasts scholarship offers from Clemson, Duke, Miami, N.C. State and Wake Forest. 247Sports has Clemson as the favorite at this point, but we’ll see what Cervenka has to say about yesterday’s experience in Blacksburg.

Nash Central (Rocky Mount, N.C.) rising senior defensive end Houshun Gaines entered the weekend with the one offer from Duke. The 6’4”, 210-pound prospect now has two scholarship offers in the fold, as Virginia Tech came through on Saturday.

PROSPECTS ON THE RADAR

Channing Hames, a 6’5”, 250-pound defensive linemen, tweeted that he enjoyed the experience and looks forward to returning. At this point, though, it does not appear the Bishop O’Connell (Arlington, VA) rising senior has an offer from Virginia Tech. We’ll see if that changes soon or if the coaches want him to come to camp.

Hames has been offered by Boston College, Connecticut, Old Dominion, Virginia and West Virginia, among others.

Atlee (Mechanicsville, VA) athlete Tramell Carey has not been offered by did visit Virginia Tech on Saturday. The 5’11”, 170-pound Carey earned VHSCA first-team all-state honors at defensive back as a junior in 2013.

6’0”, 185-pound wide receiver Marcus Van Hook seemed to have a great time on his Virginia Tech visit. The Heritage (Newport News, VA) prospect, a rising senior, has no offers at this time and may need to attend Tech’s camp before he gets anything definitive. Offer status aside, Van Hook seems to have had an excellent time going by his tweets.