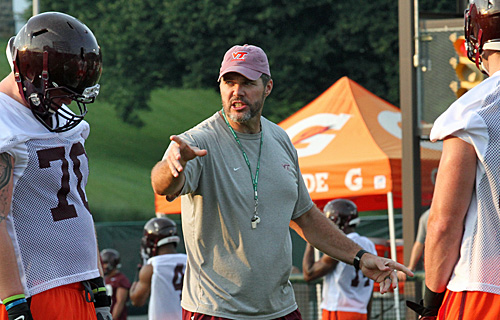 Virginia Tech appears to be losing offensive line coach Jeff Grimes to LSU.  Per Mike Barber of the Richmond Times-Dispatch, VT commit Billy Ray Mitchell‘s head coach confirmed that someone from Virginia Tech informed him and Mitchell that Grimes will indeed be taking the LSU job.  If that’s true, then he’ll be the first coach to stay on Frank Beamer’s staff for just one year since offensive coordinator Gary Tranquill in 1994.

Two Virginia Tech OL recruits, Tyrell Smith (@TyrellSmith76) and Colt Pettit (@ctpettit72) sounded off on Twitter this afternoon, within minutes of each other (1:07 PM and 1:13 PM) with varitions of “this sucks.” Billy Ray Mitchell (@billythekid_75) also chimed in on Twitter with a frowny face at 1:36 PM, so it’s pretty clear that Tech’s recruits are disappointed that their recruiting coach and position coach appears to be on his way out.

Grimes, who recruited the Auburn offensive line that was a big part of the Tigers’ run to the National Championship Game, is highly regarded both as a coach and a recruiter.  Unfortunately, his tenure in Blacksburg will have lasted less than a year, assuming these reports are true.

Virginia Tech currently has commitments from five offensive line prospects.  However, Brady Taylor recently received an offer from childhood favorite Ohio State, and he was likely going to decommit whether or not Grimes stayed.  Could the Hokies lose any of their other offensive line commits?  Here’s a look at their top listed offers:

Keep in mind that offer lists are fluid.  Those were the listed offers of those players when they committed to Virginia Tech last summer.  Since then, they could have added offers.  Or, they could have lost offers if some of those other schools filled up all their spots.  For example, Wisconsin already has five offensive linemen in their class, so it’s very unlikely that their offer to Mitchell is still on the table, though I could be wrong.

It’s too early to speculate on the futures of those players.  It’s a confusing time for us as fans, but it’s even more confusing to the recruits.  We are less than a month from Signing Day, and their recruiting coach is leaving.  Try to be patient and let them sort things out for themselves.  They only get one Signing Day, and it’s important for themselves that they make the correct decision.

You’re probably wondering who the Hokies might hire to replace Grimes, if he is indeed gone.  The first candidate that pops up in my head is Todd Washington.  Washington was a starter at Tech in the 1990s.  Here’s what he’s been doing since:

Washington is one of just 13 people to win a Super Bowl both as a player and as a coach.  In his one year in the UFL, the Hartford Colonials finished #1 in total offense and rushing yards.  Four of his offensive linemen went on to sign contracts with NFL teams.

There are two issues with Washington:

1: He and offensive coordinator Scot Loeffler aren’t familiar with each other.
2: He has never recruited on the 1-A level.

However, USC head coach Steve Sarkisian offered Washington the job as the offensive line coach for the Trojans.  Apparently he’s a coach who is on the rise.  Also, there are rumors that Washington could be headed to the Detroit Lions to join the new staff of Jim Caldwell.  Would he be interested in the Tech job?  I think so.  Would it be enough to pull him away from an NFL job?  I don’t know.

Another option I can think of off the to of my head would be Boston College offensive line coach Justin Frye.  He coached with Scot Loeffler at Florida and Temple, and his lines at Temple and Boston College have been very good.  Coordinators generally like to work with guys they are familiar with, so I would think Frye’s name has at least come up in conversations between Loeffler and Frank Beamer.

However, Frye has a very close relationship with Boston College head coach Steve Addazio.  He played under Addazio at Indiana, and coached under him at Florida, Temple, and now Boston College.  I would have a hard time seeing him leave Addazio, but you never know until you try.

Whatever decision gets made, you can bet that Frank Beamer and Scot Loeffler have been talking about it since last week.

I titled an article this week Welcome to Normal.  Virginia Tech is now facing a situation that every other school faces a lot: coaching changes.  Frank Beamer built a program that saw very little coaching turnover through the years, but here’s the harsh lesson that we’ll all have to get used to in the future: when you hire good coaches, other programs are going to try to hire them away.

Assuming the Grimes news is true, the ball is now in Frank Beamer’s court.  The Hokies are in the process of rebuilding their offensive line, so it’s very important that Beamer make the right hire.