Virginia Tech will face #17 UCLA in the Hyundai Sun Bowl on December 31 in El Paso, TX.  This marks Tech’s 21st consecutive bowl appearance, the longest streak in the country.

The Sun Bowl invitation means the Hokies will be returning to the site of their first-ever bowl appearance. On January 1st, 1947 (the 1946 postseason) the Hokies received a bid to the Sun Bowl and lost to Cincinnati 18-6 in icy, cold conditions.

The Sun Bowl will be played in El Paso at 2pm (Eastern Time) on New Year’s Eve.  The game will be televised by CBS.  Virginia Tech finished the regular season with an 8-4 record, including a 5-3 mark in conference play.

The Hokies will be facing a UCLA program that has been rejuvenated by head coach Jim Mora, Jr.  The former head coach of the Atlanta Falcons went 9-5 at UCLA in his first season last year, and the won the Pac-12 South.  This year the Bruins went 9-3.  UCLA had not won more than seven games in their previous six seasons before Mora’s arrival.

The Bruins rank as high as #5 in the country in kickoff returns, and as low as #120 in penalties per game and #119 in penalty yards per game.

We’ll have much more on this matchup this week. For now, see our Links Page for related links, and for lots of great information on El Paso, see this message board post.

Hokie fans: Please support TechSideline.com and Campus Emporium by doing your Hokie Holiday shopping online at CampusEmporium.com! Just click the pic below to get started: 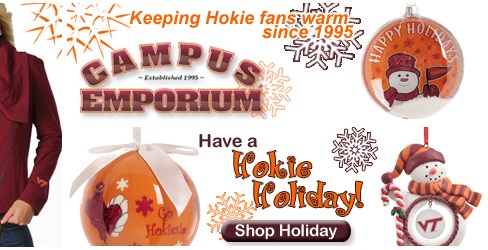