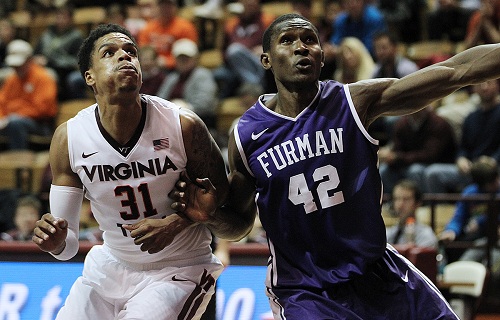 Virginia Tech got a balanced effort offensively and easily dispatched Furman 75-54 on Tuesday night.  The Hokies are now 4-3 on the season, while the Paladins dropped to 2-3.

The Hokies got double figures scoring from five different players…

Freshman point guard Devin Wilson added six points, and he also dished out 11 assists.  That was the most assists in a game by a Tech freshman since Dell Curry did it way back in his rookie season.  Wilson had eight assists in Saturday night’s loss to Seton Hall.

The Hokies won easily despite the absence of three players…

Ben Emelogu: The freshman guard was out with concussion-like syndromes.
Marquis Rankin: Rankin, who hasn’t played all season, has gone home for Thanksgiving.
Cadarian Raines: Raines played the first three minutes of the game, but never came back in.

After the game, head coach James Johnson said the team needs Raines to play better.  That’s why he didn’t play much on Tuesday night.

The Hokies return to action on Friday against Radford.  Tip-off is scheduled for 2pm, and the game can be seen online on ESPN3.