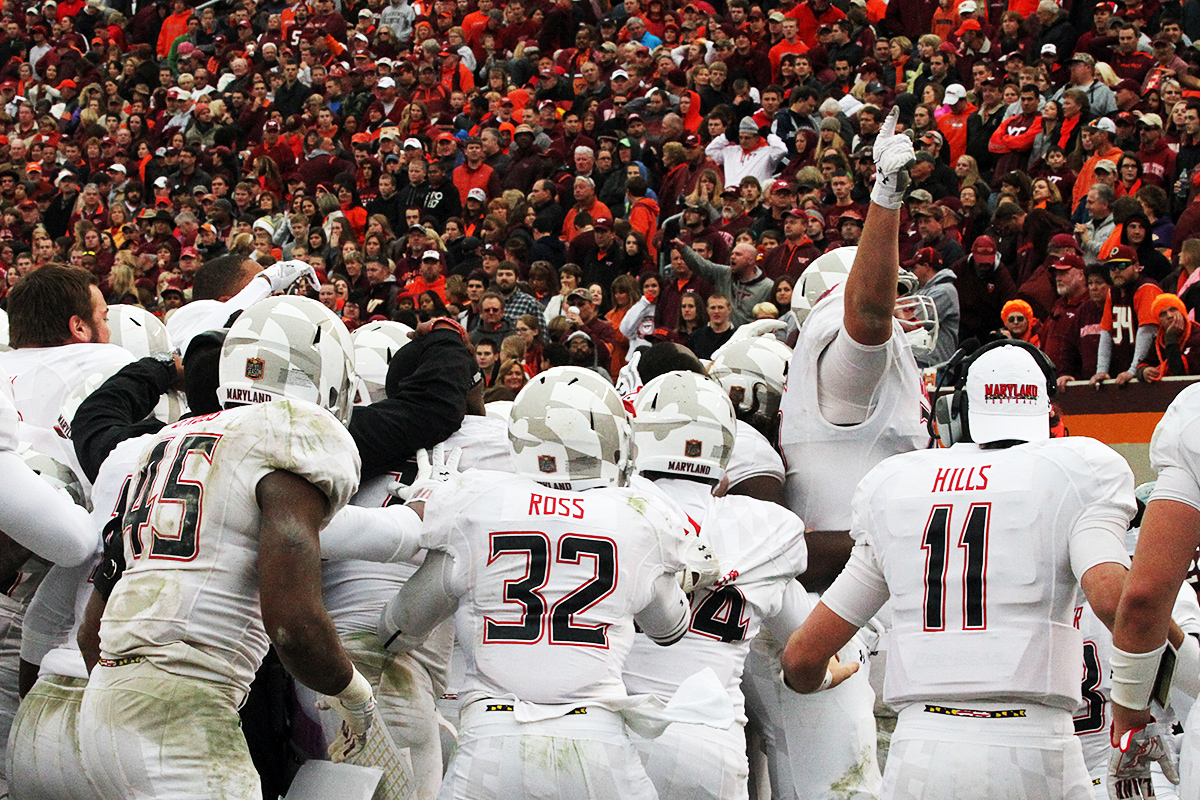 Virginia Tech lost to Maryland 27-24 in overtime in Lane Stadium on Saturday afternoon.  The Hokies have now lost three of their last four games.

Tech was 15-0 when Logan Thomas did not throw an interception, but that streak ended today.  Thomas threw two touchdowns, and he was 19-of-31 for 210 yards.  However, he was sacked six times.  At times he held onto the ball too long, but the offensive line had their worst game of the season in terms of pass protection.

Maryland quarterback C.J. Brown was just 12-of-25 for 135 yards, with a touchdown and an interception. However, he ran for 122 yards and two touchdowns, and he continuously escaped to run for big gains against the Virginia Tech defense.

The second half didn’t start well for Virginia Tech.  Brandon Facyson was beaten soundly on a big third down play, and then Kendall Fuller was burned for a 43 yard gain down the left sideline.  Just like that, nickel Detrick Bonner (with Der’Woun Greene playing free safety) was beat in the corner of the endzone by wide receiver Nigel King for a touchdown to make the score 21-7.

After leading 7-0 early in the game, the Hokies were outscored 21-0 by a Maryland team that had lost four of their last five.  Their one win in that span was a one-point win over UVA.

After Maryland took a 21-7 lead, Demitri Knowles took the kickoff back 88 yards to the Maryland 12.  However, Thomas was sacked on a second and eight play, which brought up a key third and 12 from the 14.  He hit Willie Byrn on a crossing route, and Byrn took it inside the one yard line for a first down.

Two plays later, Thomas rolled out and hit D.J. Coles for a one yard touchdown pass to make the score 21-14 Maryland with 10:03 left in the third quarter.  Considering how they played offensively in the first half, the Hokies looked down and out, but the huge kickoff return by Knowles kept them in the game.

The remainder of the third quarter was uneventful.  Neither team threatened to score, and the Terps continued to hold a 21-14 lead heading into the fourth quarter.

Logan Thomas was clutch on a game-tying scoring drive.  First he hit Demitri Knowles on a huge 38 yard pass on a crossing pattern for a first down.  After a 12 yard Trey Edmunds run, and a nine yard scramble by Thomas, Thomas hit Willie Byrn on a fade in the corner of the endzone to tie the game at 21 early in the third quarter.

Virginia Tech’s defense settled down after allowing a score on the opening drive of the third quarter.  After a James Gayle sack, the Terps punted it back to the Hokies, and with 7:48 left in the game, VT took over on their own 45.  However, a busted play on second down (Logan Thomas went one way, and J.C. Coleman went the other on an attempted handoff) wasted a down, and the Hokies went three and out.

However the Tech defense held again.  Maryland went three-and-out, and Tariq Edwards ended the Terp drive with a big sack.  After the punt, the Hokies took over on their own 40 yard line, but Logan Thomas was sacked on first down, and the drive went three and out.

Maryland crossed the Tech 50 to the 49 on the ensuing drive, but a big play on a screen by Tariq Edwards made it third and 11 from the 50.  A fourth down throw to the sideline was incomplete, and Maryland was forced to punt, and the game went to overtime with the score tied at 21.  This obviously made Tech fans nervous, as true freshman kicker Eric Kristensen was playing in his first game, and he had already missed a 34 yarder.

However, Kristensen came through with a 31 yard field goal in overtime to make the score 24-21 Tech after the offense failed to score.  The Maryland offense struggled with the Tech defense for almost the entire second half, so there was no reason to worry, right?

Wrong.  The Terps successfully attacked the edge of Virginia Tech’s defense and scored a touchdown in just four plays in overtime.  C.J. Brown took it around the left side, dove for the pylon, and just made it in.  The play was reviewed and upheld, and Maryland won 27-24.