The Hokies are improving in the passing game, and that’s something to be proud of.  They need to continue to improve, and continue to win the turnover battle.

The running game isn’t where they want it to be, but as the running backs get healthier, Weaver thinks that will improve.

Weaver doesn’t have a problem with Condoleeza Rice being on the playoff committee.  Sometimes people from outside football are necessary.  Football people will have biases and grudges, but an outside party will not.

There was a good walk up crowd on Saturday, and that led to the first sellout of the season.

The starters can’t be introduced on the field for football like in basketball.  There just isn’t enough time.  There are 44 starters between both teams.

Stinespring’s birthday is Saturday, and he hopes for a win over Pitt for his birthday.

The running game obviously needs work.  They feel like they can run the ball better, but they know that they will run it better.  It’s a collective effort across the board.  They haven’t gotten the productivity that they would like.

The season is going well for Stinespring in his new role.  He enjoys coaching at Virginia Tech no matter what role he is in.

Ryan Malleck was an asset and an experienced guy.  Logan Thomas had a lot of confidence in him.  He was a major loss.

Kalvin Cline is goal oriented and very serious about what he does.  The UNC game was the 17th game of his entire life.  Even in high school, he was more of a flex tight end, so this is all very new to him.  It’s really quite remarkable that he’s had this much success.

Darius Redman played well against UNC.  The coaches are trying to play to his strengths.  Zack McCray had a thigh bruise early in the season, and that set him back.  Once the staff decided to play Kalvin Cline, they decided not to hold back.  They were going to get him as many reps as they could get.

The Hokies had a big recruiting weekend against UNC, and that went very well.  The staff will do a lot of recruiting during the bye week following the Pitt game.

Stinespring thinks Tech will sign five offensive linemen in February, but he didn’t rule out the possibility that they would sign more.

The Hokies added a Junior Day this past year, and they will do it again this year.  They are going to have a Junior Day right after 2014 recruiting is done.

Stinespring is on Twitter now.  He joked that he had always wanted to get on there, but he wanted to wait until he wasn’t Offensive Coordinator anymore.  It’s a valuable tool.  It allows you to be in contact, and recruiting is about contact. 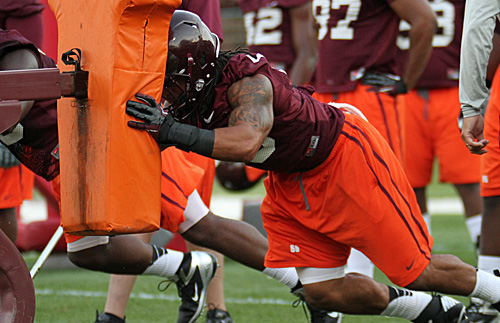 The defense is playing pretty welll, but they can always be better.  They have a lot of chemistry because most of the starters are all around the same age, and they’ve played together for a long time.

The Hokies aren’t seeing anything from offenses that they haven’t seen before.  Things are very fast to pick up.  That’s a product of experience.

Tech knew Marquise Williams might play for UNC, so it was always in the back up their mind that they might have to defend the read option a lot on Saturday.

The Hokies can still get better on defense.  They can put more behind their shoulder pads, and they can do a better job of getting 11 guys to the football.

Tech has to bring it against Pitt this year.  They have to get off to a good start and let Pitt know that it’s Tech’s house.  The Hokies missed tackles and didn’t execute last year, and that will have to change this year.

Wilson graduated last May, and he’s taking more classes now.  It’s easier than it was before because he’s not stressed about graduating.

Wilson played for Mike Smith at Hampton, who is a legend in that area of the state.  His dad played for Smith as well.  It’s been great to play for him and Frank Beamer. 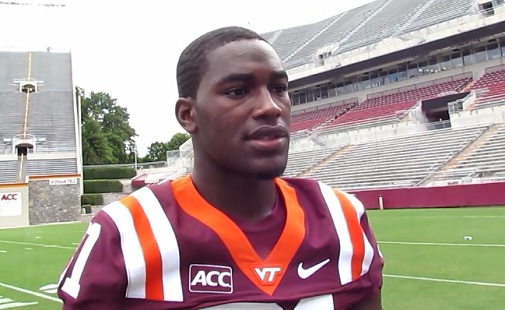 It was kind of a struggle coming from high school to college at first, but he’s come along and the coaches have done a great job of preparing him.

Facyson enrolled in January, and it was difficult coming in.  His dad didn’t let him go home for his first 5-6 months on campus to force him to get used to being away from home.  He had great people around him.  It’s a close secondary.  Spring practice was an eye opening experience.  He was surrounded by great players, but he had the people around him to help him get acclimated.

Nobody in his home town had ever graduated early, but he and his friend Tray Matthews (who plays for Georgia) became the first people to do it.  Facyson’s dad always had it on his mind that Facyson should graduate early.  His mom and his step dad moved to Dubai to be educators, so at that point it made sense for him to just graduate early and go to college.

Facyson was sick for his unofficial visit to Virginia Tech.  He had to go to the hospital and get a steroid shot for a throat abscess.  He wasn’t feeling well obviously, and he could barely talk, but he still committed to Tech on the visit.

Enrolling early helped Facyson a lot.  It helped him be prepared for the season.  It was difficult because practicing and film study is so much different in college than in high school.

Atlanta is Facyson’s home town, so it’s been great playing two games there.  The Georgia Tech game was the best because he won in front of his family and friends.

Facyson knew he made the interception against Georgia Tech.  He knew he cradled it.  He was just hoping the replay wouldn’t overturn it.  It was a great moment.

Facyson played wide receiver his entire football career.  He played defensive back beginning his junior year, and he started both ways those last two years.  He loves the idea of being a two way player in college.  It’s not too hard to make the adjustment.  He’s gotten a few reps at wideout in practice.  He doesn’t know when he’ll get into a game at wideout.

Facyson has wanted to be a surgeon since he was in the seventh grade.  He loves helping people.  He’s a biology major.  He did really well in his first biology in the class.  He wants to be a cardiologist, a heart surgeon, or anything like that in the medical field. 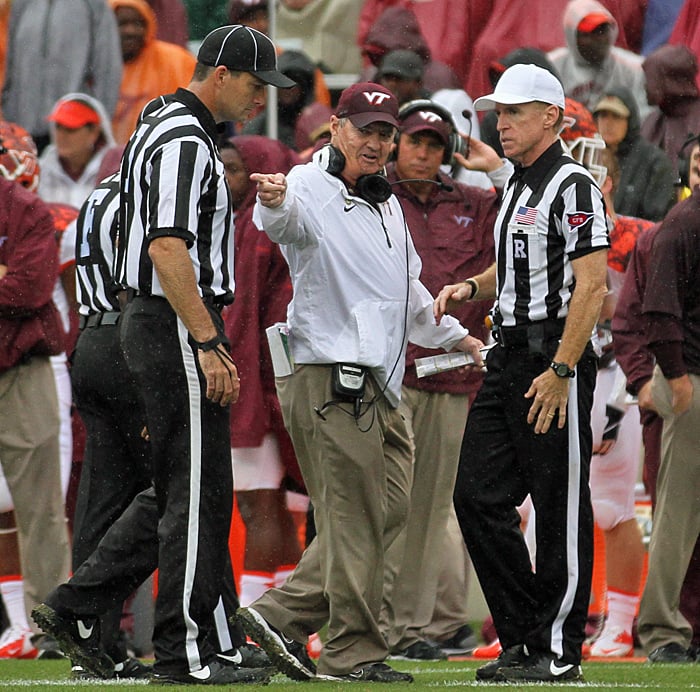 UNC is a very talented team.  Beamer saw a lot of good things on Saturday.  He thinks both the offensive staff and the defensive staff are doing an excellent job.

Beamer is glad that J.C. Coleman is back.  They now have an experienced guy in the backfield.  Hopefully they can start running the ball more consistently.

Beamer likes the coaches in the program, he likes the direction they are going, they just have to keep grinding.

Beamer really likes the design of the plays in the passing game.  The receivers are also improving.  They just have to keep working.

The Hokies had a breakdown on their protection in their blocked extra point against UNC.  That’s something they can get fixed.

Pitt is always a talented, physical team.  Pennsylvania is a good area for football.  They play tough football up there, and that carries over into the Pitt program.  They are well-coached, and you have to play well to beat them.

Tech lined up with an extra lineman a few times against UNC.  They also had a tight end on the backside, which kept alive the possibility of a pass.

Tech has some sweep plays in their playbook, but right now they are trying to take advantage of what their personnel is capable of doing.

Logan Thomas just passed Tyrod Taylor as Tech’s all-time passing leader.  That says a lot.  It’s great to have two quarterbacks in a row who were great players and great leaders.  Taylor and Thomas both have great character.

Mike Goforth is happy about the progress Sam Rogers has made since Saturday.

Mark Shuman is just getting back from his injury. Hopefully he can help the team as time goes by.

Beamer was interviewed by Ron Wolf at Green Bay, and he was offered a job, but he’s always felt that college coaching is where he needed to be.  He likes to deal with kids and see them develop through college.  He takes great pride in that.

Pitt’s move to the ACC is good for both parties.  It’s good for Pitt, and it has helped stabalize the ACC.  They are very physical and tough, and the Hokies will have to play a great game on Saturday.

Monday was Day 3,237 of Virginia Tech’s continuous possession of The Commonwealth Cup.