Jalen Hudson , a 6’5″, 190-pound shooting guard out of St. Vincent-St. Mary (Akron, OH), has verbally committed to Virginia Tech over Arkansas.  Hudson, a senior, revealed his decision via Twitter Friday evening.  He took official visits to both schools before coming to his decision. 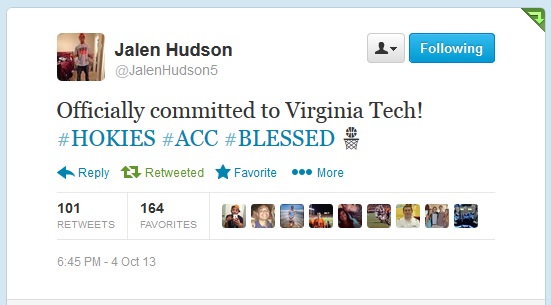 Hudson is in his second year at St. Vincent-St. Mary, LeBron James’ alma mater.  He transferred there after two years at Benedictine in Richmond (VA), where he lived for most of his life.  Hudson adapted well to the move, averaging about 15 points per game while helping the team to the 2013 OHSAA Division II state championship game.

“He was thrust into a primetime player situation.  He had to score for us to win.  He responded very well,” St. Vincent-St. Mary head coach Dru Joyce said of Hudson in an interview in August of 2013.

“He has a very explosive first step.  He has the ability to blow by people.  He finishes well at the rim.  He’s athletic.  He’ll dunk on you if need be.  I feel like he could be very good off the dribble on pull-ups, but he didn’t shoot it as much as I would’ve liked last season.  He shot around 38-percent from 3-point range last season.  He was 88-percent from the free throw line.  Defensively, he’s good but he needs to get better, which is like most kids at this age.  The ability is there… he just has to develop the want to.”

Hudson is rated a 3-star prospect by ESPN, Rivals, Scout, and 247Sports. He adds to an already athletic class Johnson has put together as the Hokies move towards an up-tempo style of basketball.

Stay tuned to TechSideline for more on this latest basketball commitment.