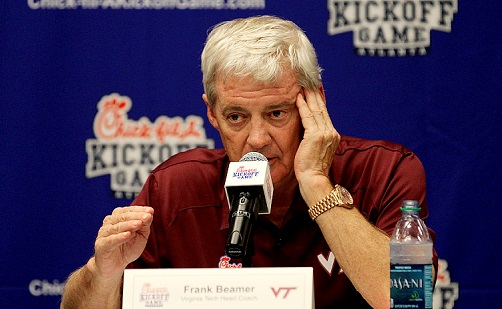 We only have to remember to last year and how we got pounded down at North Carolina. They rushed for 339 yards, which was the most anybody rushed against us, and we rushed for only 40 yards, which was the least we rushed for. Regardless of what happened last week and I know how things can happen, this is a good football team that is very capable and we only have to look to last year to know that.

On using last year as motivation

I don’t know if it’s ever good to get your tail pounded. I’m not sure about that. It was a pounding, I’ll say that. We had the record, Dave brought it up before the season, hadn’t had a kickoff returned, we had the record by about 50 games or whatever. They return a kickoff against us for a touchdown and just hammered us. It was a hammer job. They certainly got our attention and our respect on that deal.

On the weekly changes in college football

That’s what I’m talking about. I think North Carolina can have a miserable game against East Carolina and then, just like West Virginia came back the next week and just like Pittsburgh can’t score the next week. It’s just unpredictable. I can’t tell you the reason. You better be ready to play every Saturday. We learned that last year. When you think things are about right that’s when they’re getting ready to go wrong. So you just better get ready to play each and every week.

I think we’ll play as well as we’re capable. I think we’re making improvements. We had one dropped pass the other night, but after that we caught the ball better, made a couple tough catches. We’d like to get other people involved with running the football other than our quarterback. But I think we’re taking steps. That’s where I think we are.

On the Logan Thomas injuries

Well, number one, he’s tough. He fits toughness to a T. He’s that guy. But yeah, you’d like to run some other guys a little bit more and him a little bit less. Right now you kind of take what you have and try to build on it and do what you think is good for your football team. And I think our offensive staff is really doing a good job of that. I think as we sit and talk and discuss and try to figure out what your identity is right now and what you’d like for it to be. You may have to go through a couple of recruiting classes or whatever. But what we are right now, I think we have some very good athletes. I think we need to get them out in space. I think our staff’s doing a really good job.

Well, we all agree that generally we want to run the football better and generally that’s where it starts, and generally if you can run the football your passing game is better and so forth. We’ve always approached it that way here. At this particular time I think we’re a little bit better at throwing the football than we are running the football. But that’s not to say we’re giving up on it. We’ve got kids up front that work hard, they’re great kids. We’ve got running backs that are great kids, just not as experienced as you’d like. I think again you try to adapt to what you are right now. I think we’re doing a good job of that.

He’s a little gimpy right now. Hopefully by the end of the week he’ll be fine. I know this – he’s another tough guy. I’ve used that word a lot coming out of that Georgia Tech game, but I mean it. He hurts his knee, goes back in and puts a brace on it, and he’s running around there. David Wang had to snap with his opposite hand all week in practice. Coming out of the game the other night, and goes back in. I’ve got a bunch of tough guy stories for you and I like that. I like that.

On why J.C. Coleman didn’t get any carries against GT

I think a couple things, the system’s pretty complicated and he’d been out of practice for quite a while. So it’s not like he’s going to come right back and jump right in there and get a bunch of snaps. I would think that he’s going to get more snaps this week than he got last week. I think you get him back involved, because he is the one guy that does have experience. One year of experience at least. He’s got some good ability, he’s got good toughness. So hopefully he’ll have a good week of practice and get more carries this week.

On feeling back to normal this season

I really feel like we’re preparing well. I feel like on both sides of the ball the other day, we really coached well. Kicking game, I feel like we’re coaching well on that. I’ve always been a guy that if I feel like things are as good as they can be, I’m going to be able to accept that. Right now I’m very pleased with the direction our program is going.

On Brandon Facyson’s play this year

Did you see my stats as a freshman? (“You didn’t get to play as a freshman,” says the media) I forgot about that. Only because they weren’t eligible to play back then. No, that really is remarkable. Both of those guys, they’ve got some real ability. Pretty amazing, pretty amazing.

The guy is a good kicker. We went back out Sunday and kicked. Every one’s right down the middle. Good height. He just didn’t quite follow through on that second one. The thing about Cody, he knows what went wrong. Some guys, they’re missing and they can’t figure it out. He knows his rhythm, he knows his kick. I feel good about him.

On handling the threats that Journell received

I’m not exactly sure what that was. There’s wacky people running around everywhere. To me that’s just so beyond what makes good sense. I don’t even know that we need to talk about that one.

On spreading the ball around to difference receivers

I think any time you’re reading across the board and get the ball to where it should go regardless of who the receiver is… you’re not having to say ‘we’ve got to throw it here, we can’t throw it there.’ That’s kind of where we are right now. I just want us to keep on going. Coach Moorehead uses that JUGS machine after practice every day to throw them quite a few more balls. He turns that thing up pretty high. It’s zipping through there. I think we keep working on that. I think we’ve seen a definite improvement in our receiver’s concentration and their ability to catch the ball.

On giving the players the weekend off

Yeah we did, and we needed to do some recruiting. That’s a real emphasis for us. So it worked both ways and then we came back yesterday and made it a normal Sunday where we graded the video and met with our kids and had a short workout. Now we’re back to a normal Monday. Which is game plan day. We’re back on our schedule now.