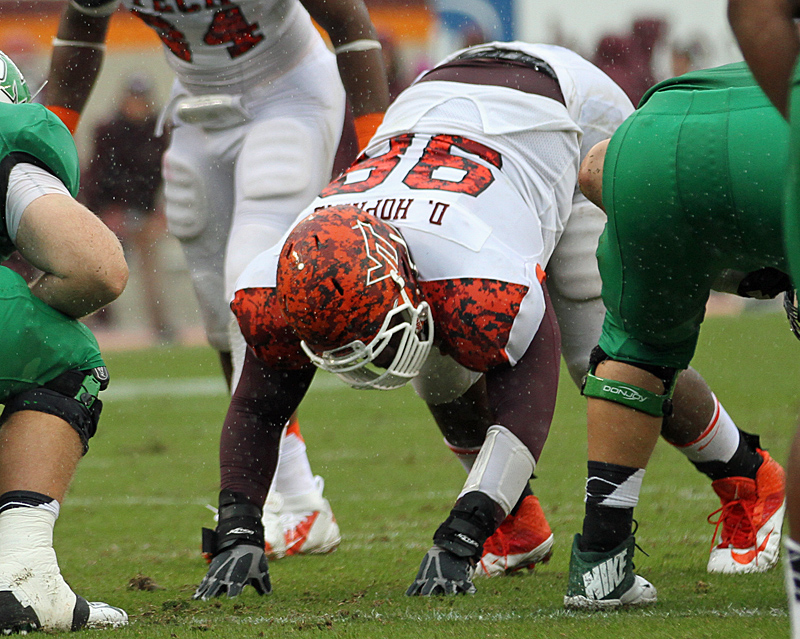 On being tired after his fumble recovery

On who talked to him after the play

I’m not sure everybody. I watched the film. I know Luther and Jack and Tariq was all up in there. The ref came over and said, ‘Y’all need to get up. Hurry up.’ I was like, ‘Ref, I’m tired, I need a second. Gimme a break.’ He was like, ‘alright.’ I got up.

On remember the gameplan from GT

It’s not a tough adjustment because most guys have been doing this for a long time. So it’s like second nature, kind of. We know what to expect, what we got to do. It’s kind of second nature. It’s been four years for most of us.

It’s just a scheme. I don’t think they mean to go low, or high-low, but it might be miscommunication. One guy, thought it was one play. Another guy, thought another play. They don’t do it that often, to me at least. If they do do it, I don’t think it’s on purpose.

On his role in stopping the option

My responsibility is mostly dive. Just control the middle, make sure the dive doesn’t hit, pop for 15 yards. And also to chase down any runs outside if I have the opportunity. It’s so difficult to stop this offense because it’s too many options. They can run the option, run the quarterback, run the dive, run the sweep. It’s so many different things you have to plan for.

On the last time he carried the football

Probably rec league. I was known to break through the line and like steal the handoff from the running back for a touchdown on defense. So that was probably the last time.

On slow starts by the defense

You have to give credit to Marshall. Their offense was a pretty good offense. Their skill guys were really good.  They attacked us in some areas that…I don’t know. I guess they were just really good.

On his blocked field goal

We’d been getting pressure the whole game. They kicked, what, three field goals. So each time we got pressure up the middle. This time it was fortunate enough to actually get the block. Maybe just got pressure and we jumped and I tipped it.

On being 3-1 heading into ACC play

I feel good with the way we’re playing. We’re learning together and growing. The offense is coming along and the defense is steadily growing. This next game is important because it’s an ACC opponent. So we have to win all these games to get to a place we want to go to.

On the differences from last year

Yeah, I have a different feel this year. I feel like we’re going in the right direction. Last year it was kind of stagnant. The people were kind of loafing and things like that. This year we’re going hard and staying hungry and going after the prize.

On preparing for GT in a short week

On using the previous Sunday practices to prepare for Georgia Tech

Yeah, it’s kind of unusual. Normally we have a full week to prepare. Last year we had some of the summertime to prepare for Georgia Tech. This year is kind of unique since it’s a short week.