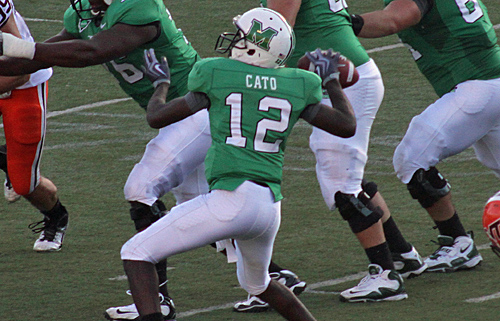 Virginia Tech’s home game against Marshall on September 21 has been set for a noon kickoff.  The game will be televised by either ESPNU, ESPNews, or ESPN3.

The Hokies are 4-0 against Marshall during the Beamer Bowl Era, and they’ve won each meeting easily…

However, this Marshall team has outscored Miami of Ohio and Gardner-Webb 107-14 in their first two games of the season.  The Thundering Herd are led by quarterback Rakeem Cato, who has thrown for six touchdowns and just one interception through the first two games.  He has a 155.44 efficiency rating.  Last season he threw for 4,201 yards with 37 touchdown passes and led the NCAA.  He’s one of the best quarterbacks in the country.

Marshall is also averaging 264 rushing yards per game and 5.5 yards per carry.  They play Ohio this weekend, and if they can manage to beat the Bobcats they will be undefeated when they travel to Blacksburg.