Virginia Tech played a sloppy game, but beat an overmatched Mississippi Valley State team 70-49 in Cassell Coliseum to run their record to 8-1 on the season.  The Delta Devils dropped to 0-6 on the year. 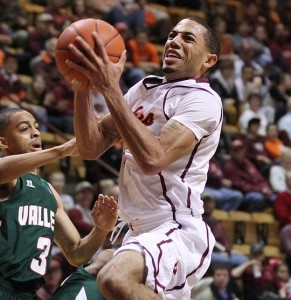 Erick Green paced the Hokies with 23 points, five rebounds, four assists and two steals in 33 minutes of action.  He was the only Tech player in double figures.  Thanks to foul trouble, as well as some poor play, several other starters spent a lot of the night on the bench while their backups got their minutes.

Cadarian Raines : Raines fouled out in just 12 minutes.  He didn’t score, and he had four rebounds in 12 minutes.  In his place, Joey van Zegeren played 23 minutes and finished with nine points, seven rebounds and three blocks.

Erick Green has scored 20 or more points in all nine games of the season.

Besides Green, Tech got a great contribution off the bench from center Joey van Zegeren .

“We didn’t play our best game,” van Zegeren said afterwards.  “It was a bounce back game.  I think it will go better from here on.”

Despite the sloppy effort on Monday, van Zegeren feels good about how the season has gone thus far.

“I think overall, we’re feeling good about the start of the season,” said the r-freshman center.  “From when we started practicing in July, after the first couple of weeks we already knew we were capable of a lot of big things together.  We have good chemistry together.  We’re playing good together.  We all worked hard to get in the shape we’re in right now.”

Virginia Tech will return to action on Saturday afternoon when they face Georgia Southern.  Tipoff is scheduled for 2pm, and the game can be viewed online on ESPN3.