For the seventh time in the program’s 129-year history and the first time since 1952, Virginia Tech lost every football game in October.

The two teams combined for 176 yards of offense in the first half and punted on 10 of the 11 drives. In the second half, they exploded for six touchdowns and 473 yards. And Virginia Tech went from trailing 3-0 at intermission to leading 21-3 to falling 22-21.

“You’ve got to have a closer’s mentality in the fourth quarter,” head coach Brent Pry said after the loss. “You’ve got to play your absolute best. And we just needed a play or two to change the outcome. And we’ll get there.

“I told the guys in the locker room: I’m just so proud of them. They’re improving all the time. They fight, they battle, the culture’s right, they’re going in the right direction. It just didn’t equal a win tonight. And we’ve got to make sure we do a better job as coaches and players. It’s the little things.”

The Hokies (2-6, 1-4 ACC) struck first in the second half against the Wolfpack (6-2, 2-2 ACC). After heading into intermission with 46 yards, freshman tight end Dae’Quan Wright totaled that by himself on the first drive of the second half. That went for 78 yards, ending in a four-yard score from quarterback Grant Wells.

On the next possession, Wells hit wide receiver Kaleb Smith for an 85-yard strike, the longest passing play at Tech since Marcus Davis in 2012. Then with 4:02 left in the third quarter, the Hokies extended their lead once more with a 20-yard rush from Wells, set up by a huge block from center Johnny Jordan. Wells was initially ruled out as he dove for the pylon, but replay corrected it and awarded him the points.

“Grant’s a tough dude,” Smith said of Wells. “He’s going to put his head down and run somebody over. Getting him in there was kind of like an exclamation point on that drive, and that’s something that the offense, we use that to build up and keep going with it.”

The offense went from anemic to eye-opening. The same group that picked up two first downs in the first 30 minutes gained three on the first drive of the second half. And the over betting line, which closed at 39 total points, never appeared to be in reach early on. But Tech brought it to life, and the team appeared to be on track to snap the four-game losing streak.

“I thought the guys did a nice job with some misdirection and formations that helped us, gave us a chance to move the ball,” Pry said of the offense when it was clicking. “We’ve got to take some shots to Kaleb, and we did that, a chance to get some explosive plays we weren’t getting in the first half. We can’t lay an egg like we did in the first half. We played so well defensively.

“You talk about complementary ball – if we’d just done a little more and been able to do some things in the first half like we did in the third quarter offensively, I think it would look a little bit different.”

Yet, the ship couldn’t stay afloat. 13 penalties, 10 of which were false starts (from nine different players), was mind boggling. The combined number of career FBS appearances among the group: 301.

“We’ve got a veteran group up there for the most part,” Pry said. “We’ve got to be better than that. We’re certainly going to take a hard look at that. I told the guys in the locker room after the game you can’t absorb 12 penalties. You just can’t. … We’ve got to be more disciplined than that, and that starts with me.”

Smith, who had one in the first half, described it as a “snowball rolling down a hill.” The penalties were infectious, and they made life more difficult.

At the same time, the NC State defense started to get a grip. Had it not committed a late hit penalty, it would have forced Tech into three consecutive three-and-outs. After coming alive in the third quarter offensively, the Hokies punted three straight times. Their two fourth quarter possessions garnered -4 yards.

The tide slowly turned, and the Wolfpack, who benched veteran quarterback Jack Chambers for true freshman M.J. Morris, turned it on. He settled into the offense after the group struggled to find its footing before the break. NC State punted on five possessions in a row in the first half before kicking a field goal and moved the ball just 130 yards on 40 plays (3.2 average).

He wasn’t perfect – Virginia Tech cornerbacks Armani Chatman and Mansoor Delane each had opportunities for an interception – but he did enough against a struggling secondary. Due to injury, the Hokies dressed just five scholarship cornerbacks on Thursday night. And despite his youth, Morris took advantage.

“Once he got his feet up underneath him, he was able to throw some balls downfield, and those guys made some nice plays,” Pry said of Morris. “I thought Mansoor was in decent shape on a couple. And they just went up and got it. And those 50-50 balls, you’ve got to make one or two of those down the stretch. We even had one in the end zone there we had a chance with Armani to end that drive. So obviously we need to continue building depth on the back end.

“We had chances on either side of the ball to close the game out and didn’t get it done.”

Both Pry and defensive end Jaylen Griffin, who had a sack, said Morris grew more comfortable as the game wore on. Tech only got to him twice, both in the first half. That allowed Morris to find a rhythm.

“I would definitely say they found a couple weak spots in the defense,” Chatman said. “I felt like they kind of caught on to what we were playing.”

In the blink of an eye, Virginia Tech went from leading by 18 to trailing by one. Morris hit Thayer Thomas on a 35-yard dart, Trent Pennix from seven yards out and Thomas again for a 16-yard score. All the while, the Hokies sputtered offensively.

As Morris took a knee to end the game, there was nothing Pry & Co. could do but feel that gut-wrenching pain of a blown opportunity. They had the upper hand at one point and were mere plays away from winning the game. Heck, a field goal or fewer penalties would’ve done the trick.

But there there they stood, members of the program’s first five-game losing streak in 30 years (1992). A beatable Georgia Tech team rolls into Lane Stadium on Nov. 5, but the Hokies could also  face six straight losses for the first time since 1987. Still, until they get to take the field again, the missed opportunities will haunt them. They let one slip away in Carter-Finley Stadium on Thursday night.

“We put ourselves in that kind of position and still had the game in our hands in the third quarter going into the fourth,” Smith said. “There are still some missed opportunities there, but just seeing that and knowing we can put this team together, we’ve got to find a way to show these young guys that you can win these games.

“We’ve got to find a way to get that win under our belt again and build life into this team.” 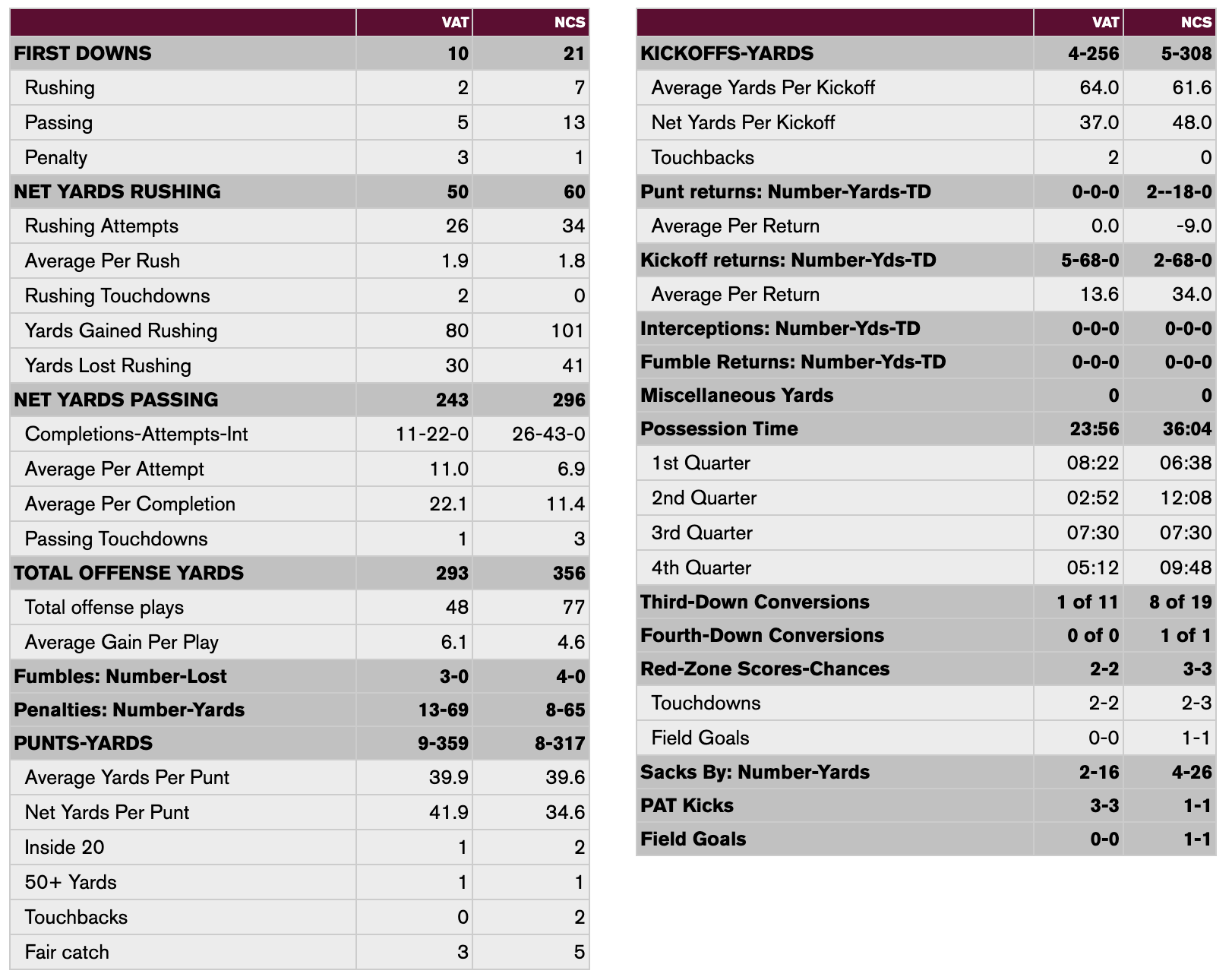 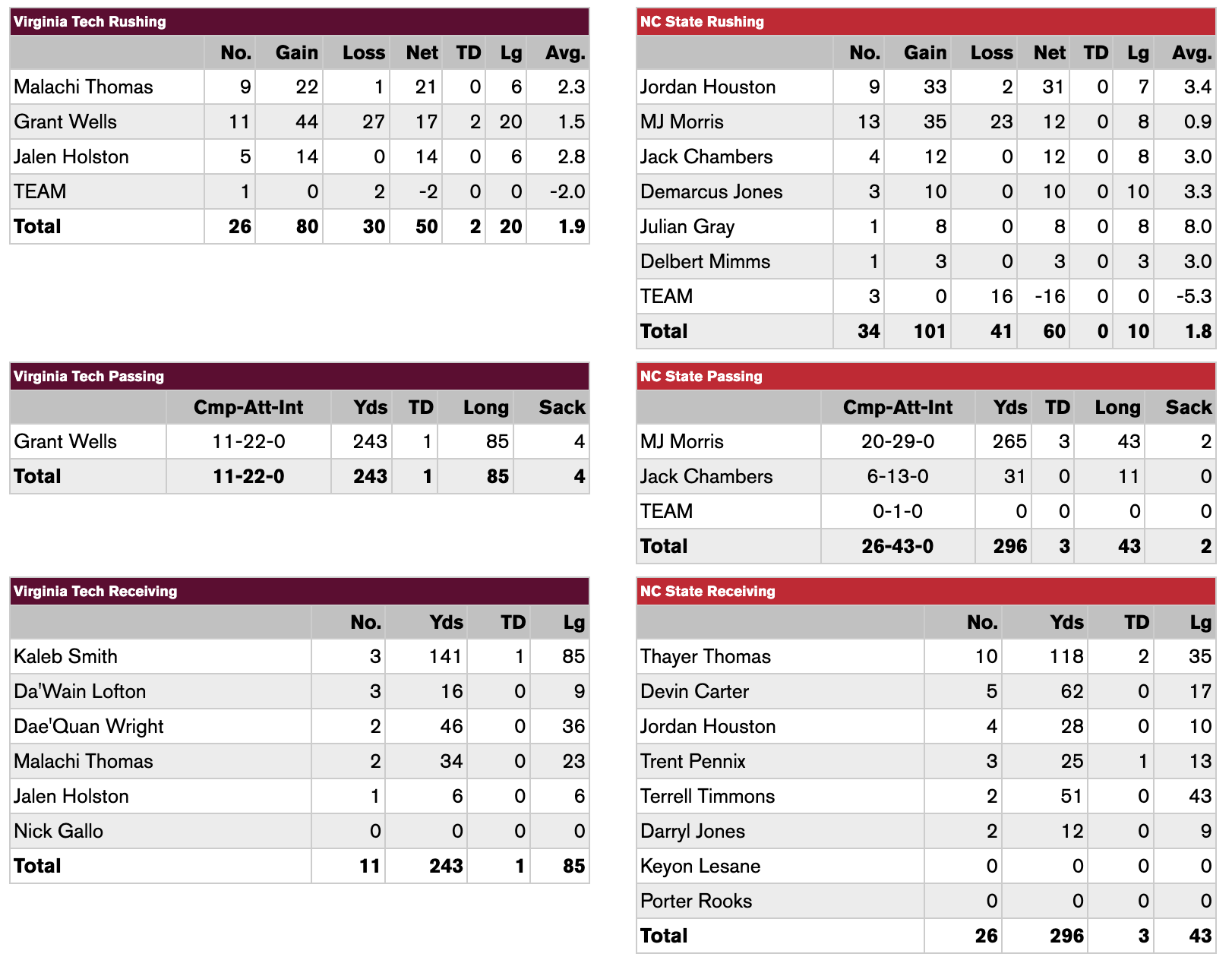 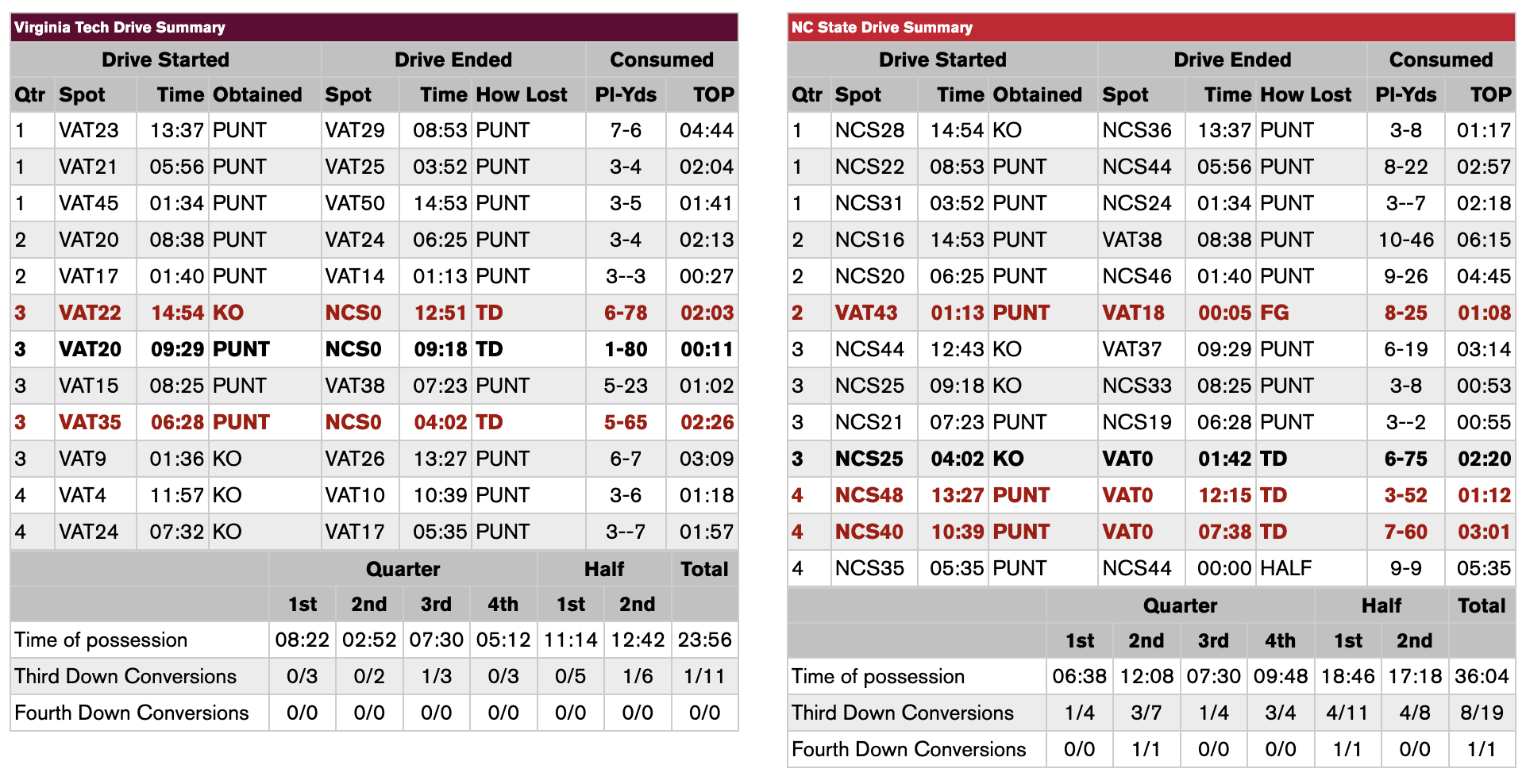 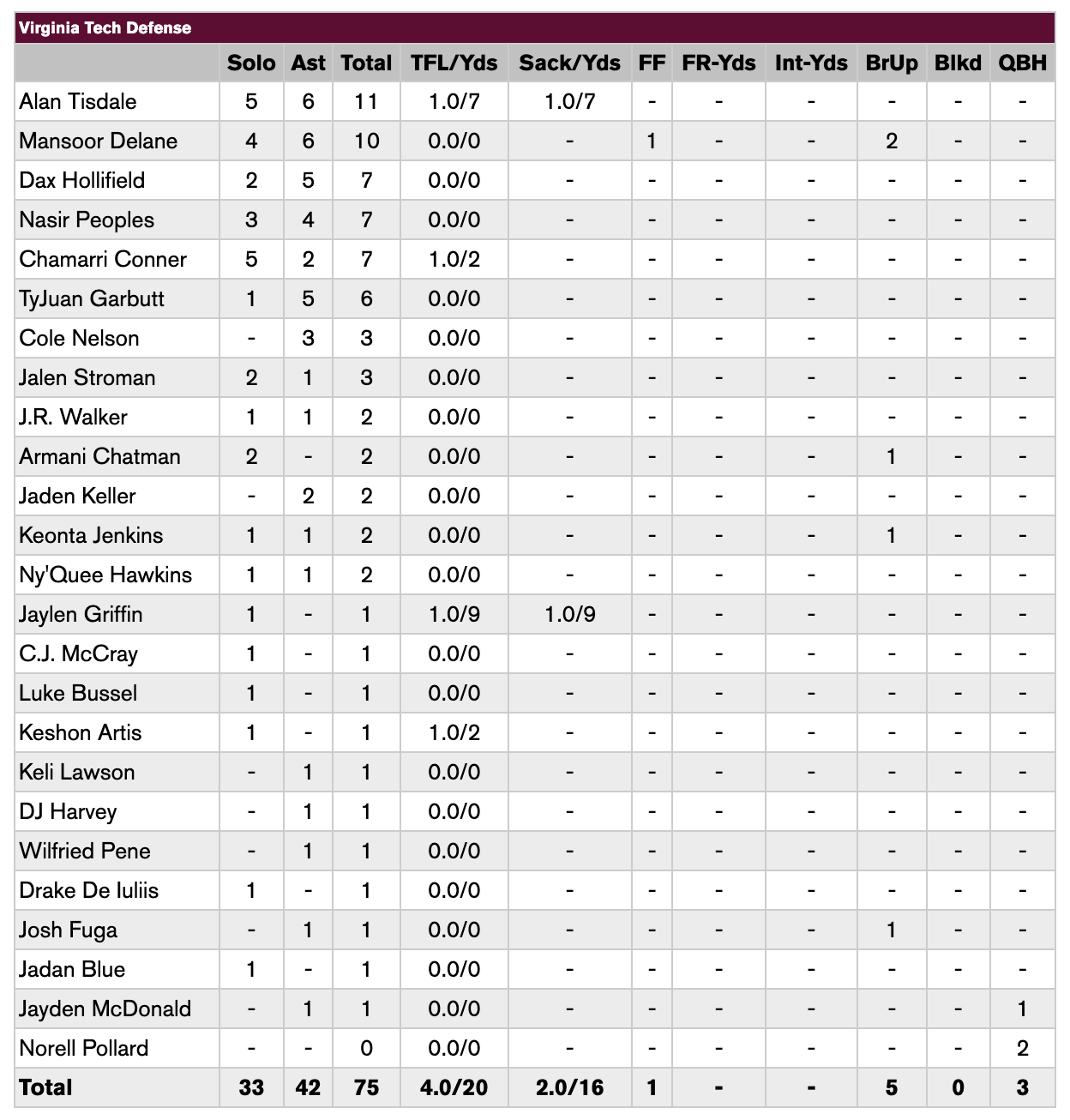