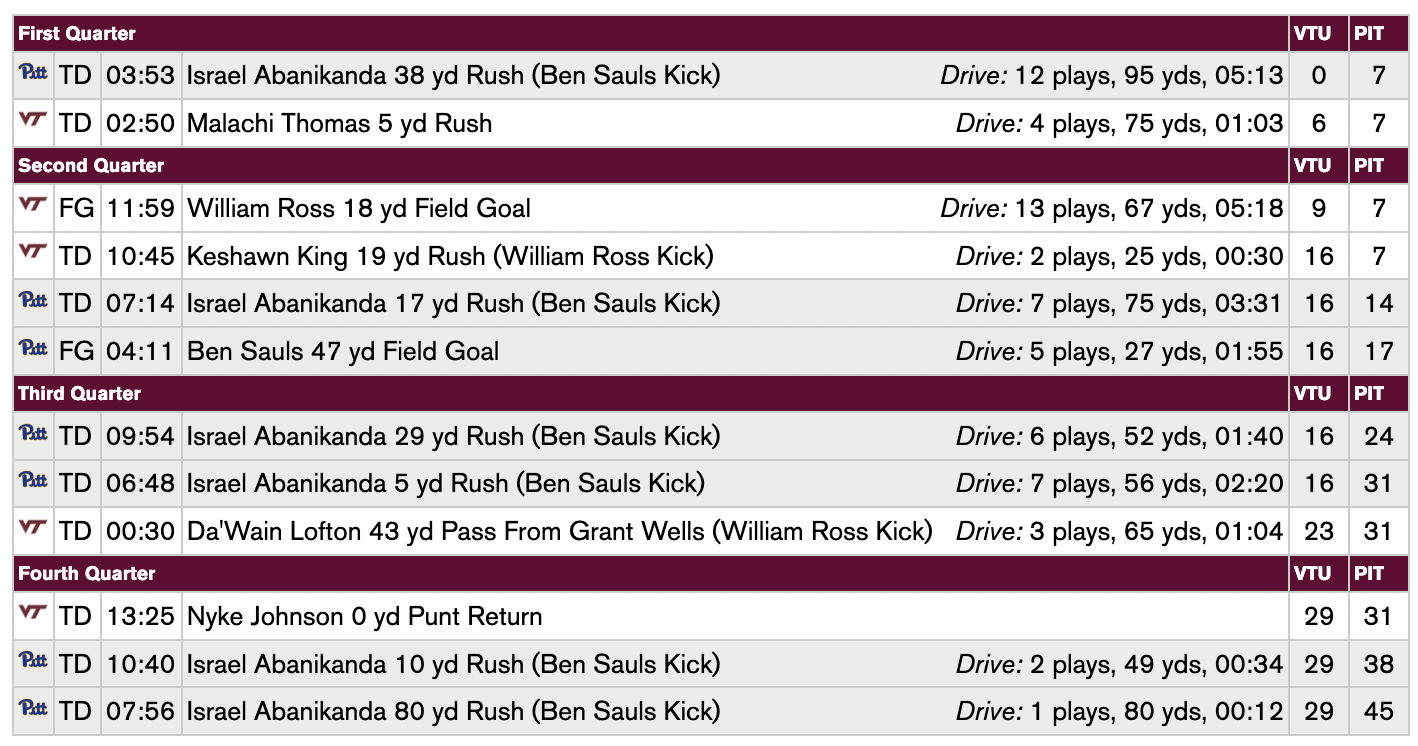 Saturday afternoon in the Steel City was the Israel Abanikanda show. Pitt’s junior running back broke and tied numerous records with his 320 rushing yards and six touchdowns in the Panthers’ 45-29 win over Virginia Tech.

He set a new school record, breaking the previous mark set by Tony Dorsett. Abanikanda broke the all-time record against the Hokies for most rushing yards in a single game, surpassing North Carolina’s Giovanni Bernard. And he matched Willis McGahee’s six-touchdown record set in 2002.

Per @ESPNStatsInfo, Izzy Abanikanda is the first P5/BCS player to top 300 rush yards and 6 rush TD in a game since Ricky Williams did it in 1998.

“That’s who they are,” Tech head coach Brent Pry said of Pitt after the loss. “They want to run the football and we know that. … We’ve got to tackle better. At times, we slip into this grab mode. It just doesn’t work against good backs. You’ve got to get your pads down, you’ve got to finish and get body-on-body.

“I think more than anyone we’ve played, they’re committed to running the football. … There are some fundamental things to run defense that we didn’t do very well today.”

It didn’t matter that Virginia Tech (2-4, 1-2 ACC) had its best offensive performance of the season, though it was a positive sight. For the first time in 2022, it was the defense that had the short end of the stick.

Grant Wells and the offense moved the ball down the field for much of the game. However, the Hokies punted five times in six drives between the second and third quarters, during which Pitt (4-2, 1-1 ACC) scored 24 unanswered. But on the whole, the offensive group was better.

Wells completed 25 of his 47 passes for 277 yards and a touchdown and had a stretch in the first half where he was 9-of-11. Kaleb Smith was all over the place, catching nine passes for 152 yards — two career-highs. And with Malachi Thomas a full-go, the unit totaled 403 yards on 77 plays (5.2 avg).

They had five plays of 20-plus yards, too. Call it “explosive” or use different terminology, but for a team that had just 16 entering Saturday — eight had come from Smith and Keshawn King — it was a welcomed sign.

“I think against a good defense, we played our best game offensively,” Pry said. “I think Malachi, we’ve got to continue to get him greased up. He got 15 carries. He looked pretty good, shaking off some rust. And I liked Grant playing his most confident game. Kaleb, you can’t ask him to do anything more.

“It was good to see us move the ball and compete and keep us in the game. That needed to happen. And I think that’s a closer look at who we can be offensively.”

However, when it looked like Pitt would pull away, Virginia Tech kept it close. After Abanikanda’s third and fourth touchdowns in the third quarter, the Panthers’ lead stretched to two scores, 31-16. Then the pendulum of momentum swung the other way.

On a three-play, 65-yard drive, Wells hit true freshman Dae’Quan Wright twice (two of his five catches) before his bomb to Lofton, which he put in a place only the sophomore could get it. Wells said he scanned the field, saw Smith was double covered and shifted to Lofton, who he trusted to make the play in a one-on-one matchup.

That pulled Tech within a score before special teams showed up. After the defense forced a three-and-out — Salem High School alum Jayden McDonald recorded the first VT sack since West Virginia — Radford native P.J. Prioleau got off the edge and blocked a punt. Nyke Johnson fell on in the end zone for the touchdown, the first blocked punt since Virginia in November 2018.

That was the second non-offensive big play of the game after Keonta Jenkins picked off Pitt in the second quarter. And all of a sudden, it was Pitt 31, Virginia Tech 29 in less than three minutes.

“Credit to Coach Holt, P.J. Prioleau, a guy that’s on that scout team, that developmental squad every day,” Pry said. “We gave him an opportunity to start on that unit because of the work he does on scout team. Lo and behold, a guy who just keeps embracing his role, earns an opportunity and takes advantage of it. That was a game-changing play.”

Yet, the Panthers never relinquished the lead. After they went three-and-out once more, defensive lineman John Morgan III forced Smith to fumble in Tech territory after a 10-yard gain. Dagger.

Two plays later, Abanikanda raced into the end zone from 10 yards out. And after Hokies kicker Will Ross missed his first field goal of the season from 36 yards — he was previously perfect on eight attempts — it took Abanikanda one play to seal the victory. First play of the drive, 80 yards, untouched.

“He’s got breakaway speed,” Pitt head coach Pat Narduzzi said afterwards. “If he pops through there, good luck to you. There’s not many guys that can catch him.”

In the big picture, Virginia Tech had numerous issues on Saturday, despite the offense giving the team somewhat of a fighting chance to win. It started with eight penalties for 74 yards.

On the second offensive series, left guard Jesse Hanson was called for a false start on fourth-and-one at the Pitt 29. That forced the Hokies to settle for a field goal. But a delay of game moved them back five more yards. A previously promising drive was wasted.

A similar situation occurred right before halftime, too. On first-and-ten at the Pitt 23, right tackle Parker Clements was flagged for a facemask. That bumped the Hokies to the edge of Ross’s field goal range before Wells was sacked for a loss of 11. Instead of a field goal try, the half ended in a Wells heave from midfield.

“Upsetting,” Pry said of the facemask penalty. “I think we were better. I think the guys are trying to eliminate penalties, I think they’re more mindful of it, but again, there were a couple of costly ones today.”

Tech had some special team gaffes, too. Peter Moore had one punt blocked and averaged just 33 yards on eight attempts while Jadan Blue returned punts for the first time in 2022 and muffed one (though he was ruled down). Ross had an extra point attempt blocked, too.

In the end, though, it was Abanikanda’s night. Tech was without defensive end TyJuan Garbutt — he had a nagging injury and the staff decided to rest him — and cornerback Dorian Strong, who is dealing with a hand injury.

Overall, no one could stop Israel Abanikanda. And while the Hokies seeing life out of their offense was a positive, they’ve yet to couple a solid performance together in all phases of the game. Back against the wall, maybe next Saturday’s 12:30 p.m. homecoming game vs. Miami is that chance.

“That’s the closest we’ve come to complementary ball, which we hope to do,” Pry said. “To give us a chance to win a game on the road against a good ACC opponent. We’re in it deep into the fourth quarter. We’ve got good opportunities. There were ebbs and flows to the game.

“Momentum kept shifting, we hung in there, we battled, we clawed back in it. We just didn’t do enough things well enough to win the game in the end. There were some good things, but against a good football team at their place, we’ve got to play better.” 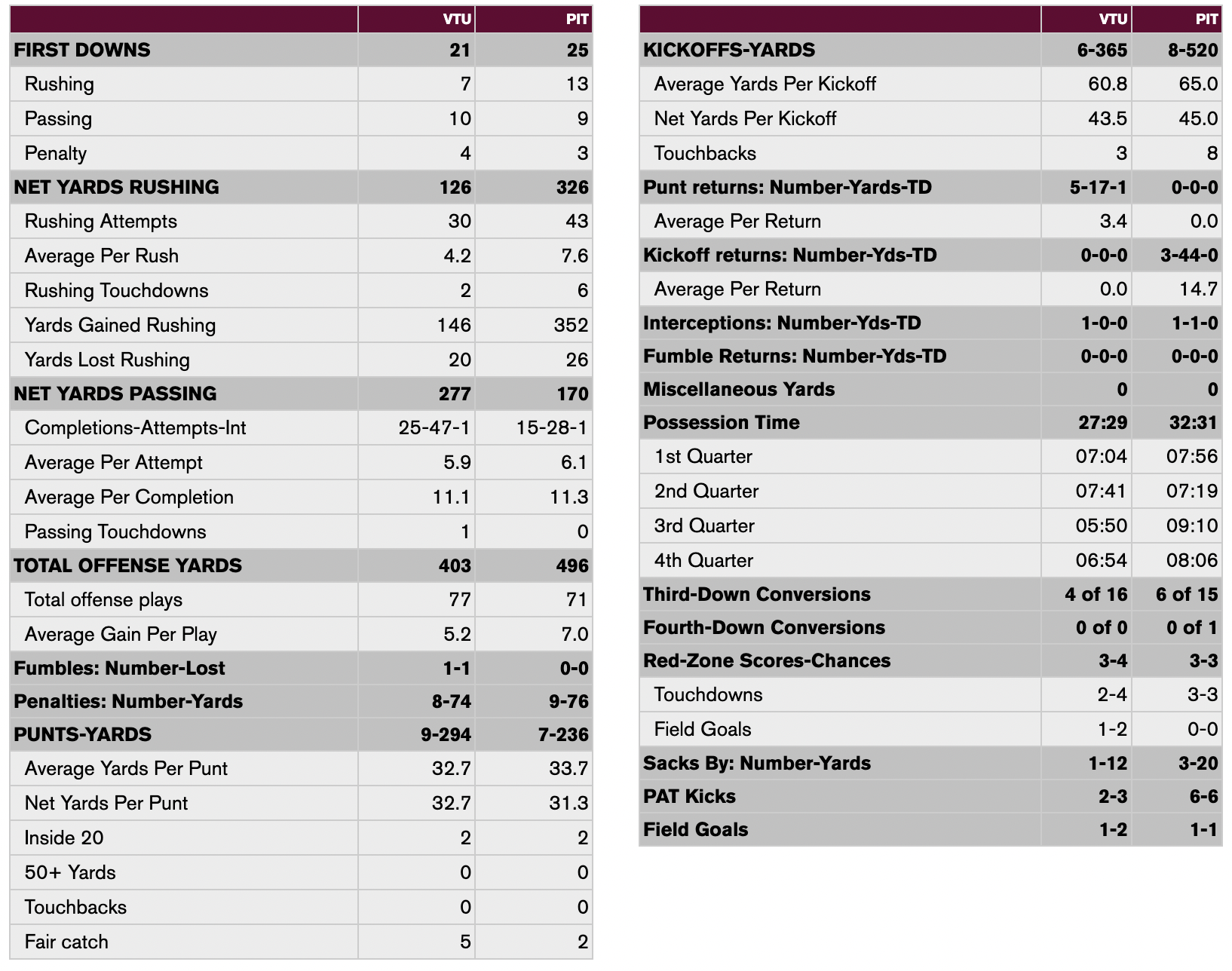 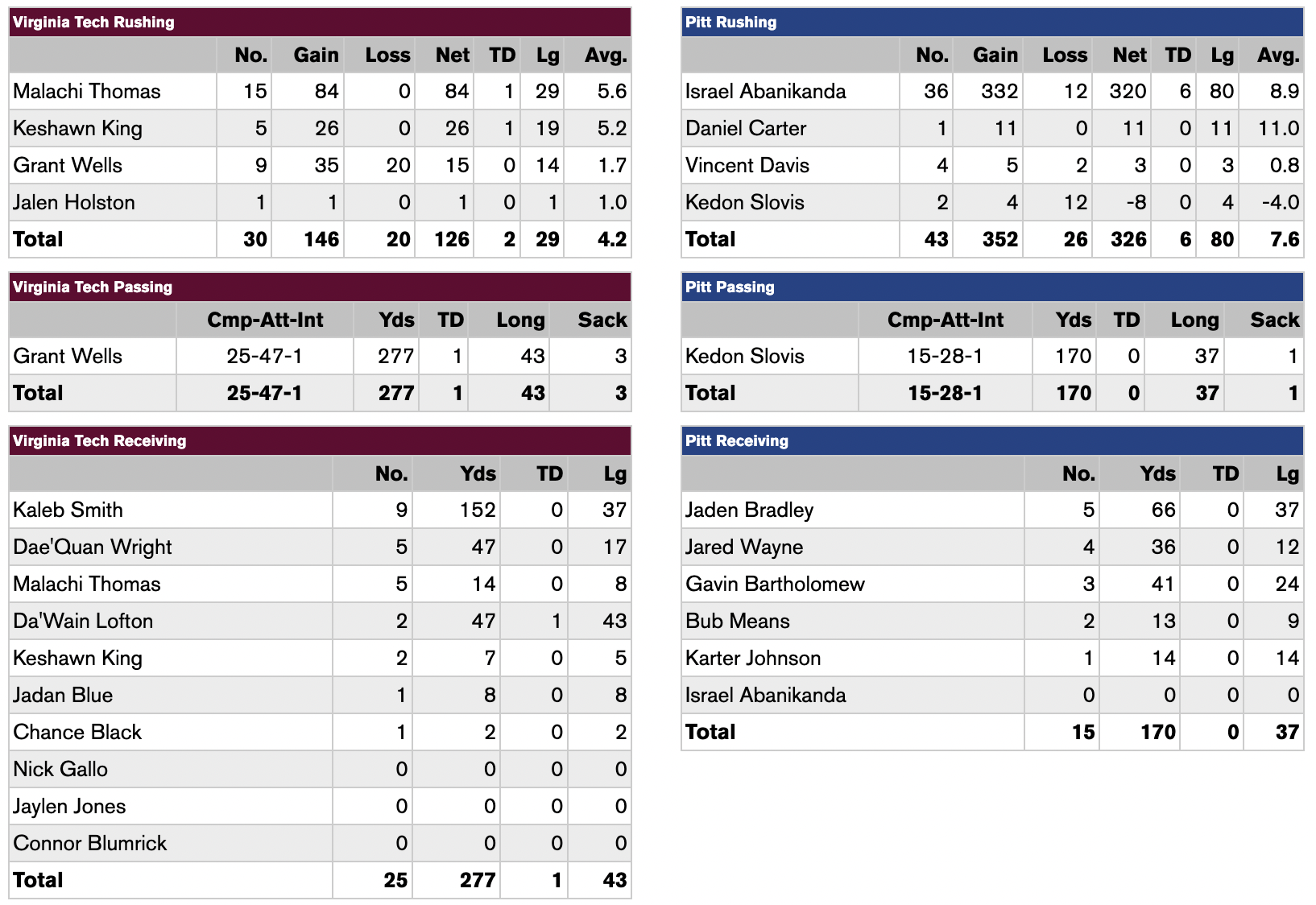 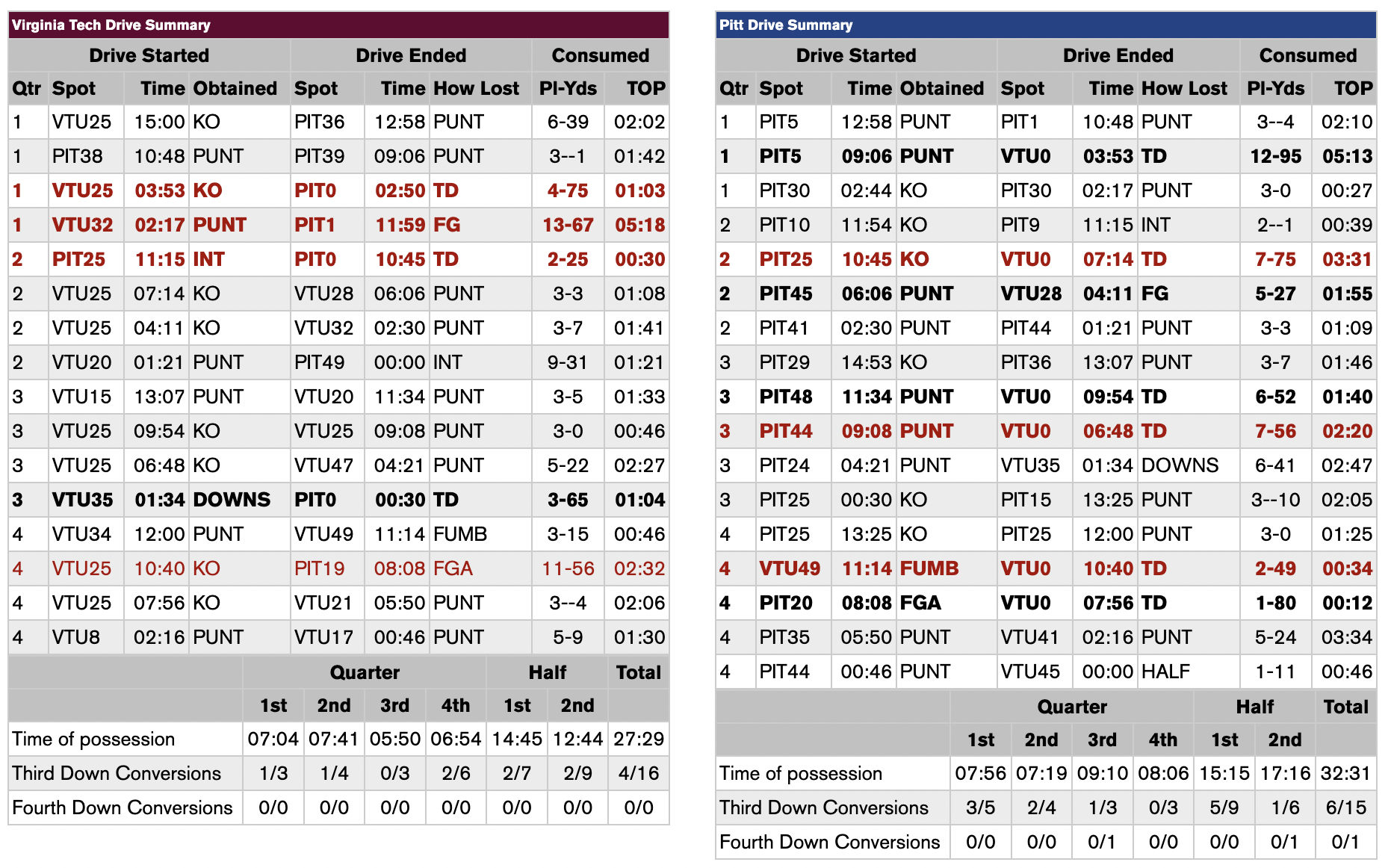 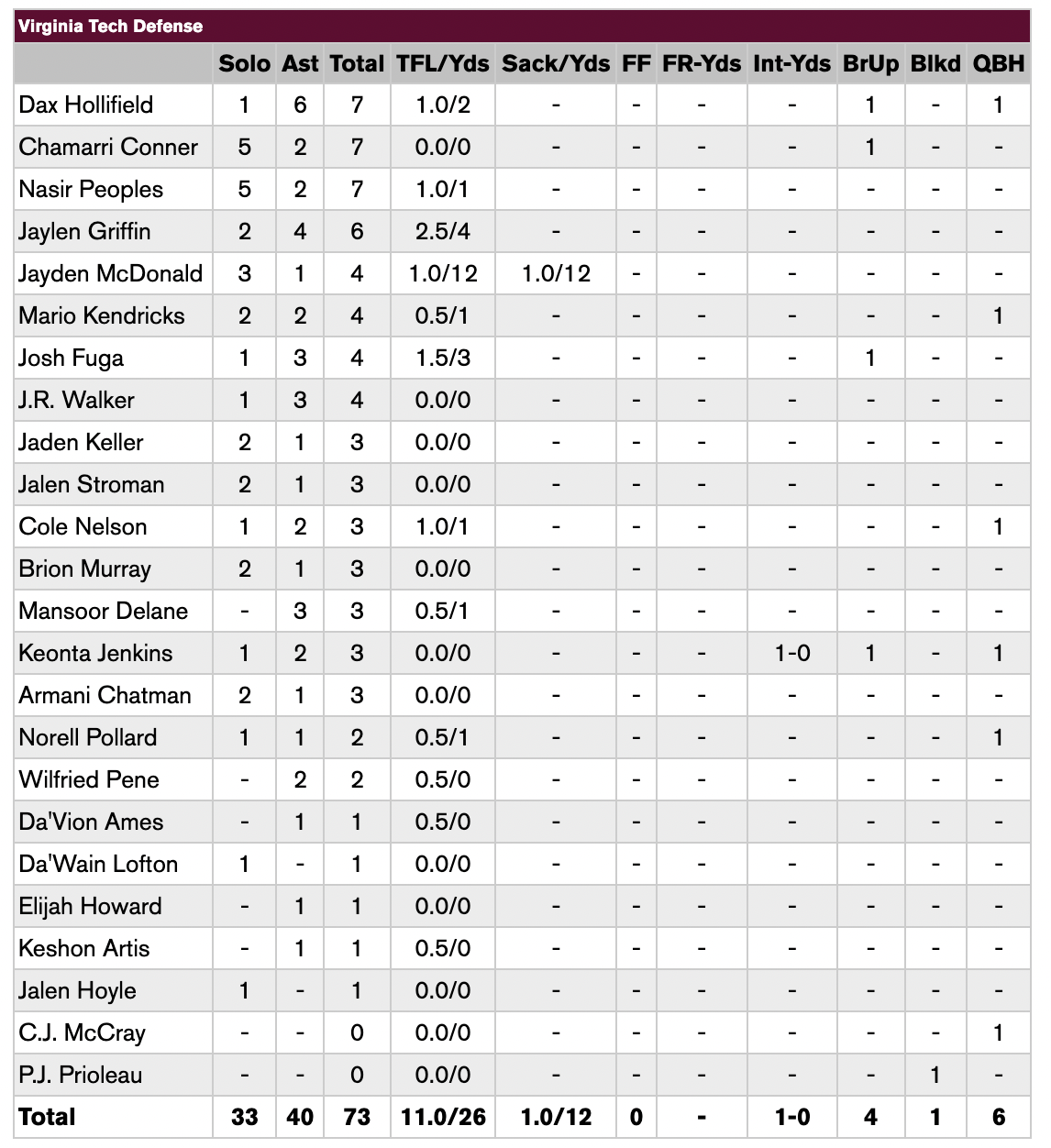