Though Virginia Tech struck first in Chapel Hill on Saturday afternoon, North Carolina crushed the Hokies in a dreary atmosphere in Kenan Stadium, 41-10.

True freshman quarterback Drake Maye accounted for 436 yards of total offense for the Tar Heels, the sixth-most all-time in Tech history by an opponent. That mark is also the highest ever by a freshman against the Hokies. Moreover, the Huntersville, N.C. native made it look easy.

North Carolina (4-1, 1-0 ACC) took a 24-10 lead into intermission and stepped on the gas in the second half. Mack Brown’s squad scored three times and finished with 527 yards of total offense in an ACC Coastal Division thrashing, and the Hokies didn’t put up a fight. Converting third and fourth downs (9-of-18 combined) played a big part for UNC.

“I think he was as advertised,” Pry said of Maye. “We’ve got to do a better job corralling him. I was disappointed, knowing going into the game that we had to keep him caged up, we didn’t do a very good job of that.”

At the same time, the Virginia Tech (2-3, 1-1 ACC) offense was non-existent, posting just 273 yards of total offense. Through four games against FBS opponents, that unit is averaging 279.5 yards and 16 points per game.

The lack of explosive plays has limited the Hokies all season, as has the lack of playmakers. They have just 16 total plays of 20 yards or more in 2022, half of which are from Kaleb Smith and Keshawn King.

Against UNC, the two combined for just 12 touches for 83 yards (30% of the total output). What’s more, King had just one play in the second half, which came on a kickoff return.

“There were some tackles that I think I’d like to see him get out of, and I think that when he’s 100 percent, he can,” Pry said of King. “They’re making some shoestring plays on him that can lead to some true explosives, because we know he’s capable of that. He’s one of those guys that when you look at our offense, he needs to have three, four, five explosives a game. We’ve got to make sure he’s getting enough touches.”

Regardless, someone has to take advantage of opportunities. Smith had a chance deep down the sideline on a ball Grant Wells underthrew in the second quarter, but North Carolina cornerback Tony Grimes stripped the ball away.

“We’ve got to create more opportunities for explosive plays,” Pry said. I thought for a while there we were throwing the ball down the field. We really didn’t do that enough today and when we did, we didn’t connect. We’ve got to have receivers continue to step up.

“Sometimes you just a chuck a ball up and a guy makes a play. We’ve got to be able to make more plays.”

For the first time since 1989, Tech scored ten or fewer points in back-to-back games. But entering Saturday, the Tar Heels were 126th out of the 131 FBS teams in total defense. It’s not like the Hokies faced the vaunted ’85 Bears.

Against one of the worst defensive units in the country, Virginia Tech had no answers or tricks up their sleeve. Tech punted seven times, including on five consecutive possessions in the second half, and were 2-of-8 on third down conversions in the latter stages (8-of-18 for the game).

“We’re not presenting enough challenges,” Pry said of the offense. “We’ve got to get into the toolbox and create some opportunities, find ways to create and garner explosive plays, some game-changers.”

The bright spots were few and far between, though a few true freshmen saw game action for the first time. Tight end Dae’Quan Wright led Tech in receptions (four for 31 yards) while cornerbacks Mansoor Delane and Cam Johnson were thrown to the fire. In fact, Delane, a Silver Springs, Md. native, made tackles on back-to-back plays in the second quarter, including a tackle for loss.

Dorian Strong, the team’s best cornerback, did not play due to a hand injury. His timetable for return is unknown. On top of that, Brion Murray was beat a few times and Armani Chatman missed a series or two due to an injury. Pry said depth at that spot was a concern from day one, but the true freshmen did a nice job considering the circumstances.

“Those guys, they come to work every day,” Dax Hollifield said of Delane and Johnson. “They’re going to be the next guys up, so [I’m] happy for them, really trying to build them up, build their confidence up and I’m really proud of them. It was a great play [by Mansoor] and we’re going to need that.”

Yet, a uniqueness is lacking with Virginia Tech. It may be too early to judge player development, but there doesn’t appear to be improvement as a cohesive unit. The team is easy to gameplan for, and in cases like Saturday night where North Carolina delivered the knockout punch early in the third quarter, opponents aren’t afraid of the Hokies at all.

Maye and the UNC offense attacked the Tech secondary all afternoon. They had nine passing plays of 20 or more yards, eight of which came in the second half. Three times they opted to go for it on fourth down, too, and converted each against distances of one, three and seven yards.

The Hokies only crossed midfield three times. The first two drives led to 10 points, while the third occurred when the game was already decided.

After the loss, Pry said he feels like team is closer than the players realize. He referenced 100-level concepts that Tech executes in practice but fails to in-game. Most of all, all three phases have struggled.

“It’s not going to be an overnight process,” Pry said. “It’s going to take time. We’re going to do it the right way. We’ve got to recruit better, we’ve got to create better practice habits and we’ve got to keep working on our culture.

“We’re making progress in all three areas. Sometimes it’s hard to see. But we are. And that’s what leads me to tell this football team that we’re closer than they think.”

But are the Hokies that close? They experienced their second-largest loss to North Carolina in program history on Saturday in Chapel Hill, and the schedule only gets more challenging. Improvement is paramount, especially when it comes to complementary football, and it starts at the top.

“We’ve been in a lot of adversity already and our practice habits have stayed true to what we believe in,” Hollifield said. “I’m going to give my best each and every day, a lot of the older guys are going to give their best each and every day, try to put their best on film. If you’ve got leaders like that, some good will come out of that, I truly believe that. Just got to go back to work, that’s all you can do.” 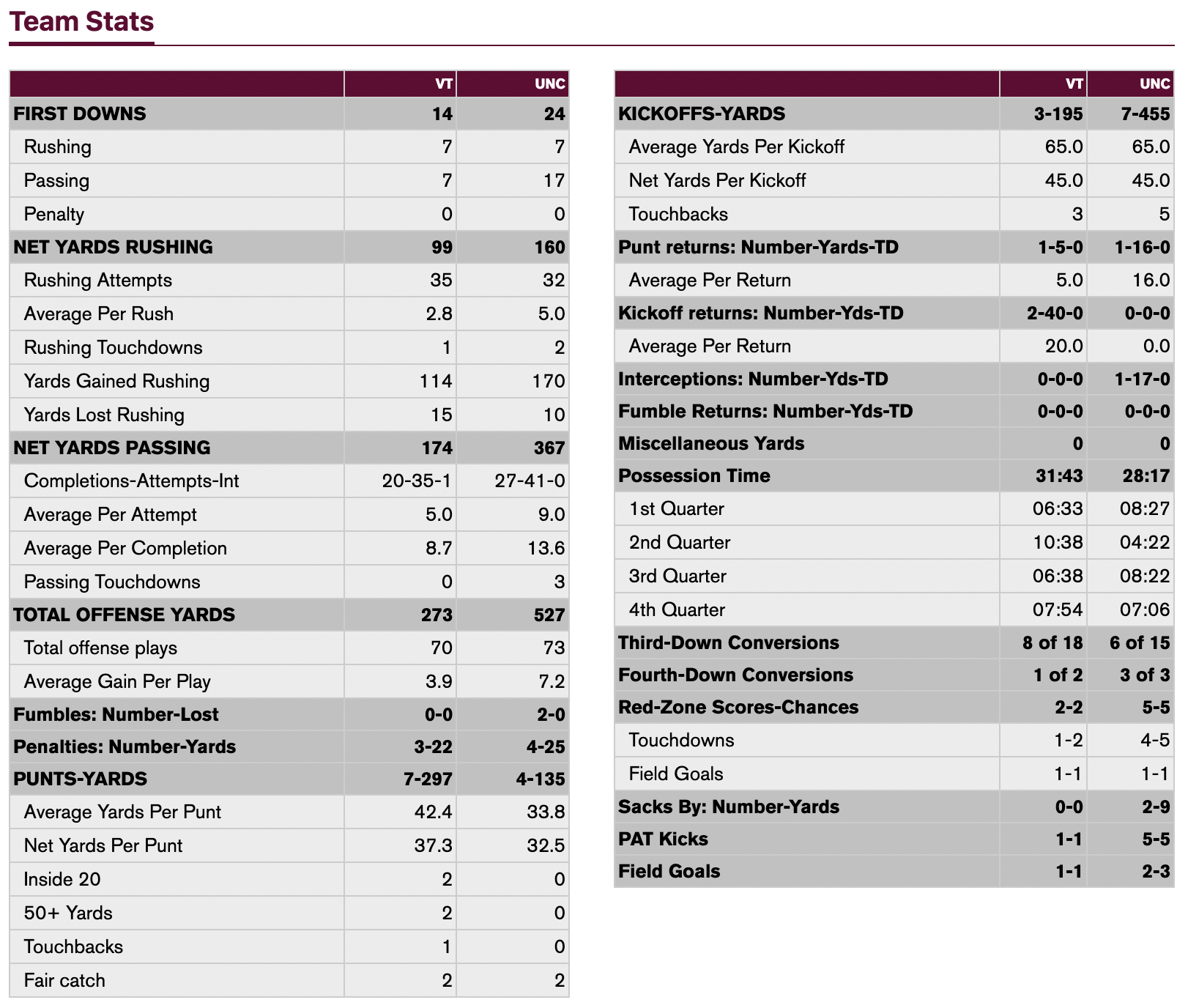 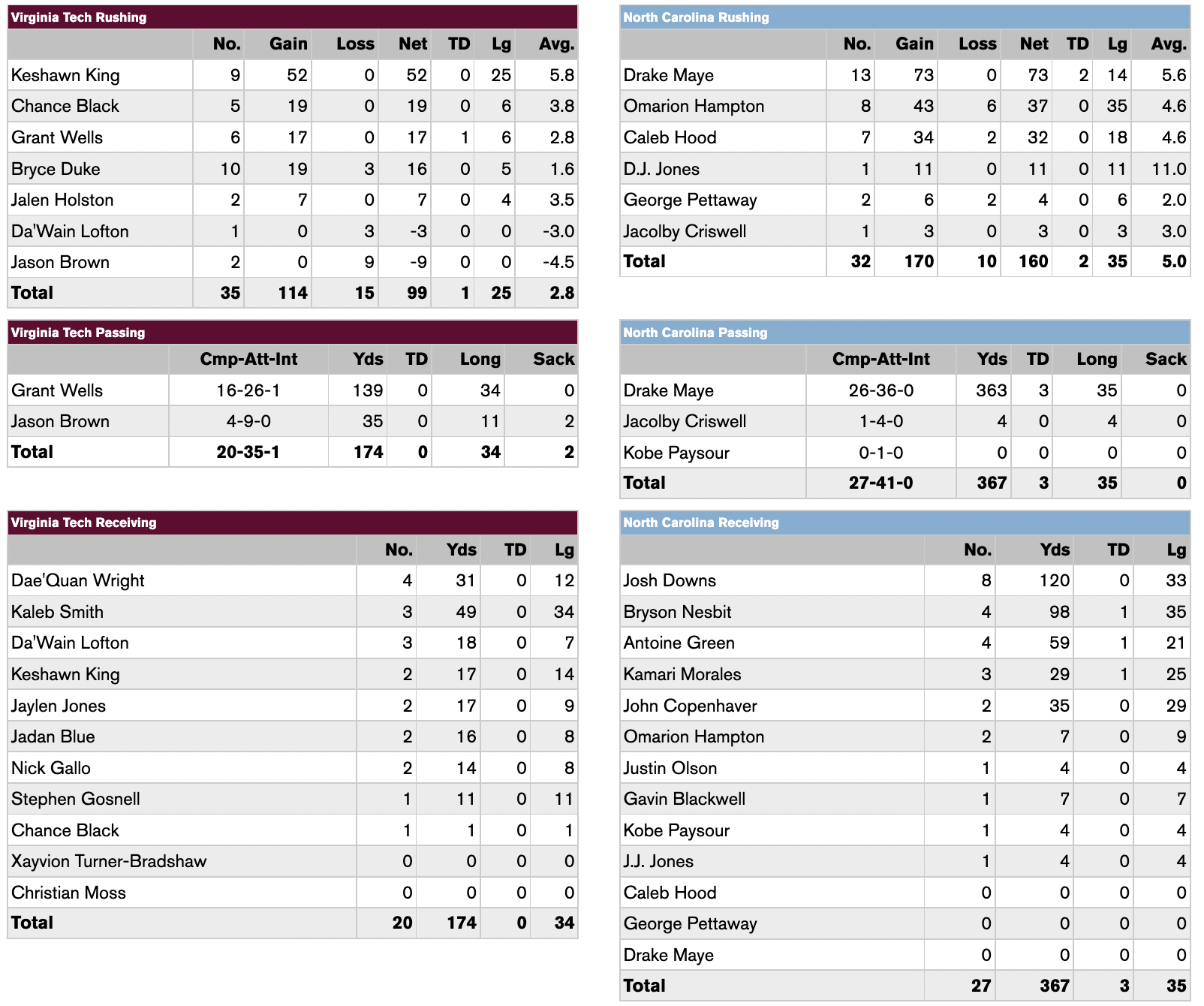 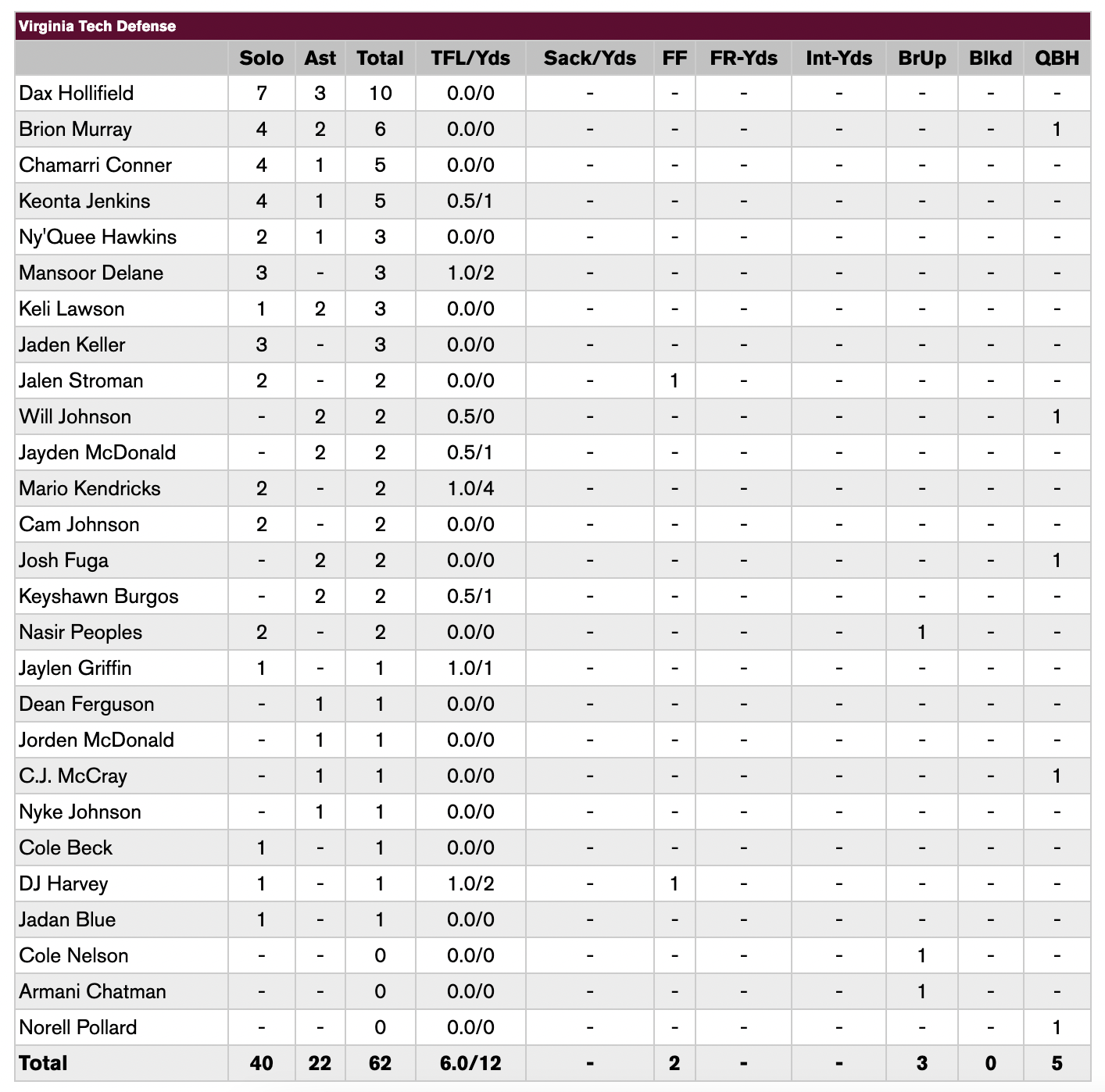