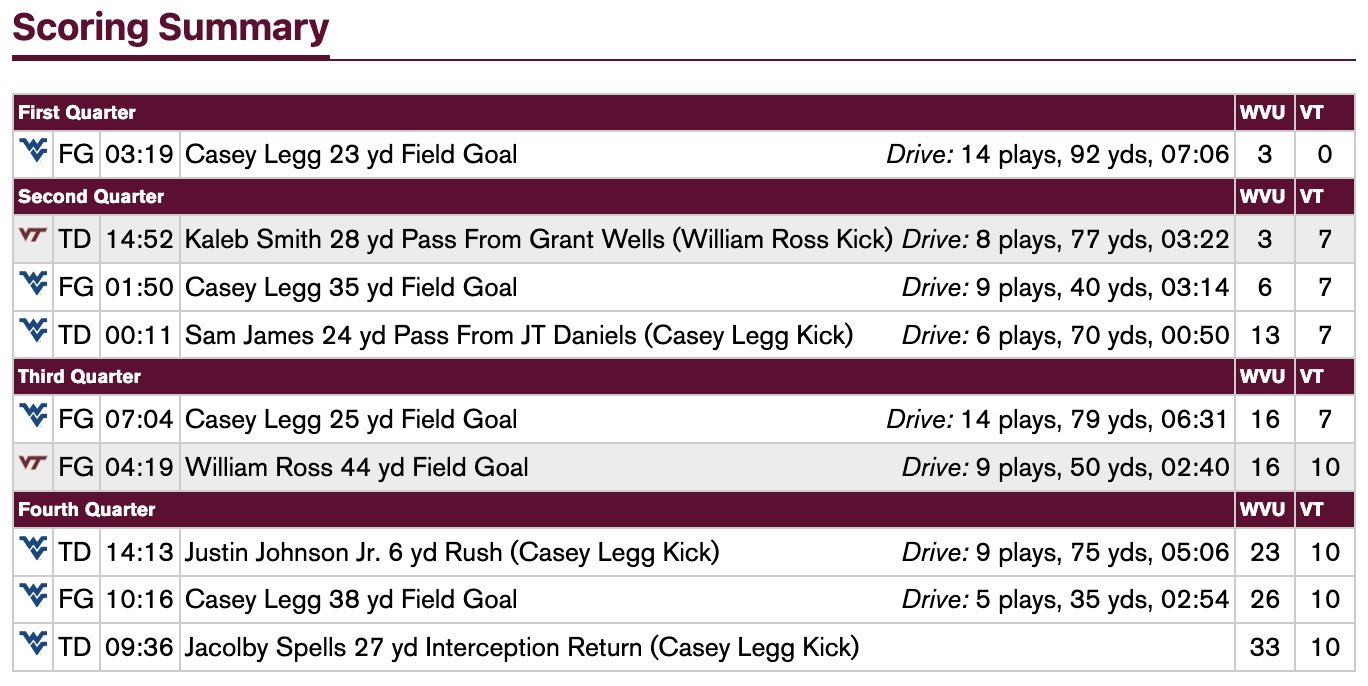 In a one-possession game at the end of the third quarter, West Virginia was called for a false start on a fourth-and-one. That backed the Mountaineers up five yards to the Virginia Tech 39-yard line.

On fourth-and-six, JT Daniels rolled to his right, and his pass attempt fell short before he was drilled by Tech linebacker Dax Hollifield. But the Hokies’ captain got to Daniels late and picked up their 12th penalty of the game, giving the Mountaineers a first down. Three plays later on third-and-14, Norell Pollard was called for illegal hands to the face, helping WVU escape once again.

That’s how the ball rolled on Thursday night, and for the second time in four games, the Hokies had 15 penalties. Between that and an abysmal performance from the offense, it resulted in their second loss of the year, a 33-10 defeat to West Virginia.

“We didn’t play complementary football,” Virginia Tech head coach Brent Pry told reporters after the game. “And we’re at a point right now as a team, we have to do that. We can’t leave too much to overcome in any phase. And either we weren’t making them earn it or we were shooting ourselves in the foot a little bit.

“We’ve got to own it and we’ve got to be better in a bunch of areas.”

It starts by cleaning up the flags. 132 penalty yards is tied for the second-most in program history, and the Hokies (2-2, 1-0 ACC) committed 10 different penalties, from pass interference and false starts to holding and personal fouls. Tech was also called for an illegal snap, an illegal substitution, facemask, delay of game and the aforementioned roughing the passer.

Pry said he feels like his team tends to press in tight situations. That looked the case in front of a sold-out crowd on Thursday night on both sides of the ball, and it was obvious in Norfolk for the season-opener.

“I’m definitely disappointed,” Pry said about the number of flags, “but I told the guys in the locker room that this is kind of where we’re at as a team right now. … It’s an overall mindset and manner in which you play.

“The most important thing to me is that we learn from each and every one of these situations and we grow to become a more mature football team.”

There are other aspects to which that applies, starting on offense. As has been the trend all season, Virginia Tech has struggled to run the football.

Against Old Dominion, Boston College and Wofford, the Hokies totaled at least 130 yards on the ground. The Mountaineers had other ideas, holding them to 35 yards on 18 carries (1.9 avg.), the 11th-fewest mark in Tech history. It’s the worst performance since they rushed for nine yards against Aaron Donald and Pitt back in 2015.

After the loss, a disappointed Pry was asked what’s missing in Tech’s run game. He admitted he wasn’t sure, though he was surprised the team couldn’t run the ball better than it did.

“We changed up the plan a little bit to spread it out a bit more to run it and had some motions involved, but we’ve got to look at it,” Pry said. “We’ve got to be able to run the football. It makes it so much more difficult to play defense.

“I think we’ve got a passing game that can work pretty good for us, that can function. But we’ve got to complement it with the run game.”

The Hokies’ longest run was 15 yards from Jalen Holston on the last drive of the game. Prior to that, the longest was a nine-yard pickup from quarterback Grant Wells in the third quarter.

As it has many times this year, the lack of success in the run game made Tech easy to defend.

“[West Virginia] was a good team and you can’t beat them being one-dimensional,” Wells said afterwards. “Like I’ve said before, the run game opens up the pass game. When you’re one-dimensional, it’s very easy to defend.”

Wells was 16-for-35 through the air for 193 yards with one interception, which sealed the game in the fourth quarter. But he started off the game well, completing seven of his first 10 throws. The ninth was a 28-yard touchdown strike to Kaleb Smith, which gave Virginia Tech a 7-3 lead at the beginning of the second quarter.

Offensive coordinator Tyler Bowen checked to that play when West Virginia was playing off-man, and Wells knew that Smith would have a solid one-on-one opportunity.

“We called a simple go,” Smith said. “Take off and [put] that fate in the quarterback’s arm. … Grant put it perfect on the outside, I just flipped my hips open and made it.”

That score gave the Hokies the momentum for the time being, and Wells finished 11-of-18 in the first half for 128 yards. As Pry put it, he played well enough to give them a chance to win.

However, the game flipped on its side. West Virginia kicked a field goal with 1:50 remaining in the first half, and when Virginia Tech punted after 49 seconds, the Mountaineers drove back down the field and scored again. Daniels found slot receiver Sam James on a seam route and placed the ball right over the head of Hollifield. That gave WVU 10 points in 1:39 and a 13-7 lead heading into intermission.

Though Tech never led again, the defense continued to hold its ground. The Mountaineers ventured into the red zone five times but were forced to kick three field goals, scoring a touchdown just once. Three separate drives — twice in the first half, once in the second — took up 37 plays, 211 yards and 16:51 but culminated in just three points, which highlighted how effective Tech’s defense was on Thursday when it needed to be.

And despite the unit allowing 421 yards, 24 first downs and Daniels to finish 20-for-30 for 203 yards, it gave the Hokies a shot to win, much like the play of Wells.

It was the main reason why the game was separated by just one score at the end of the third. But over time, penalties and a one-dimensional offense doomed Pry & Co., and Justin Johnson’s six-yard scamper that made it 23-10 early in the fourth quarter closed the door.

“We can’t play too many snaps on (the defensive) side of the ball,” Pry said after WVU ran 76 plays. “Some of it was our doing, some of it was West Virginia, some of it was us unable to move the ball better. But (allowing just) 26 points and 400 yards against that group — you’re going to give yourselves a chance.”

“I was disappointed about (the tackling). … We’ve got to play complementary ball and make the other team earn it.”

Now the first ACC road game of the season at North Carolina comes into focus, followed by a gauntlet. Three ranked foes — No. 24 Pitt, No. 25 Miami and No. 12 NC State — are on the schedule with an open date sandwiched in between. That’s without mentioning that three of the next four games are away from Blacksburg.

It doesn’t appear any massive adjustments will come in the meantime, meaning it could be a long campaign, especially when a running game is practically non-existent. The defense will keep Virginia Tech in some games over the next few months, but the ceiling is only so high. 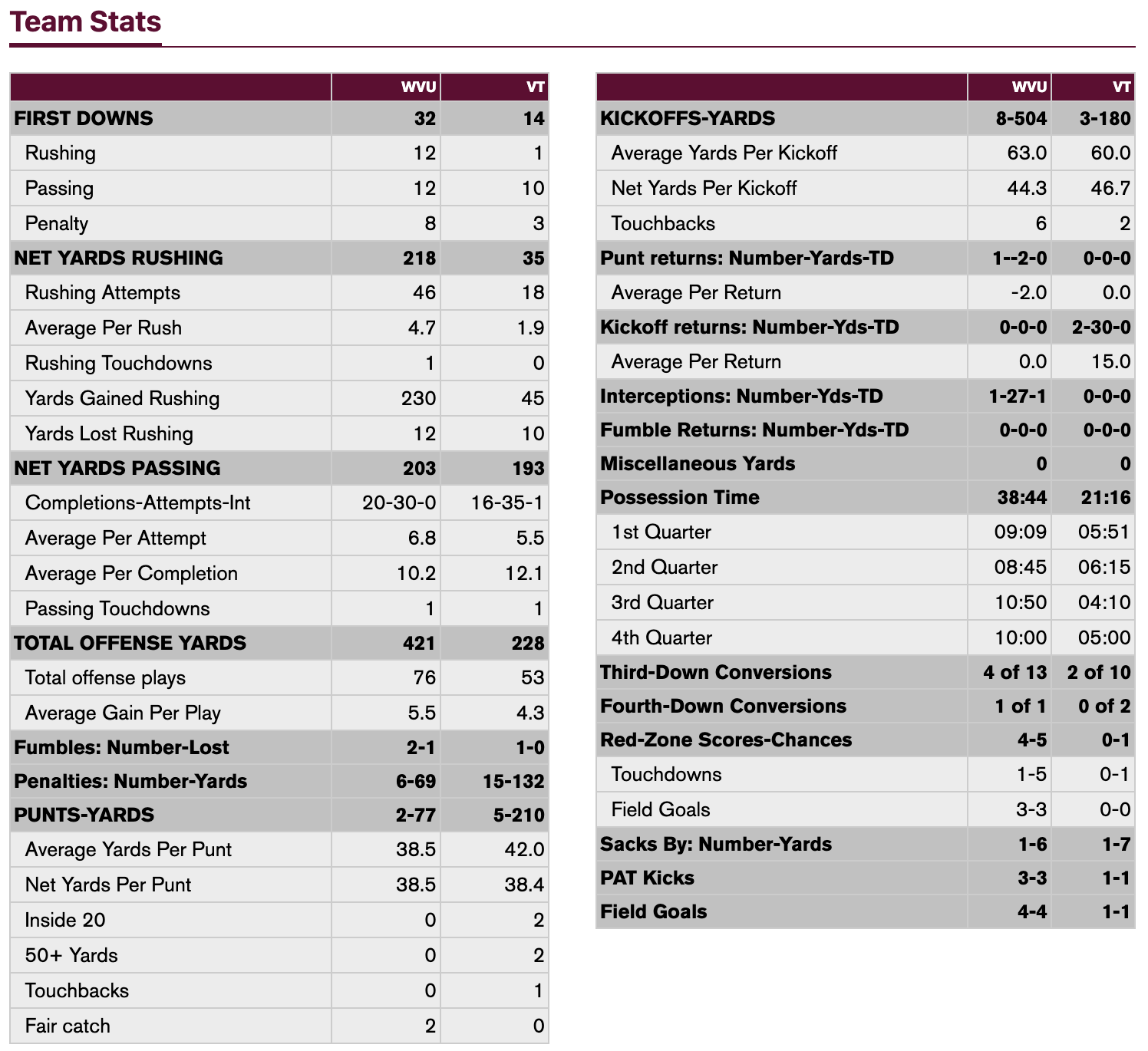 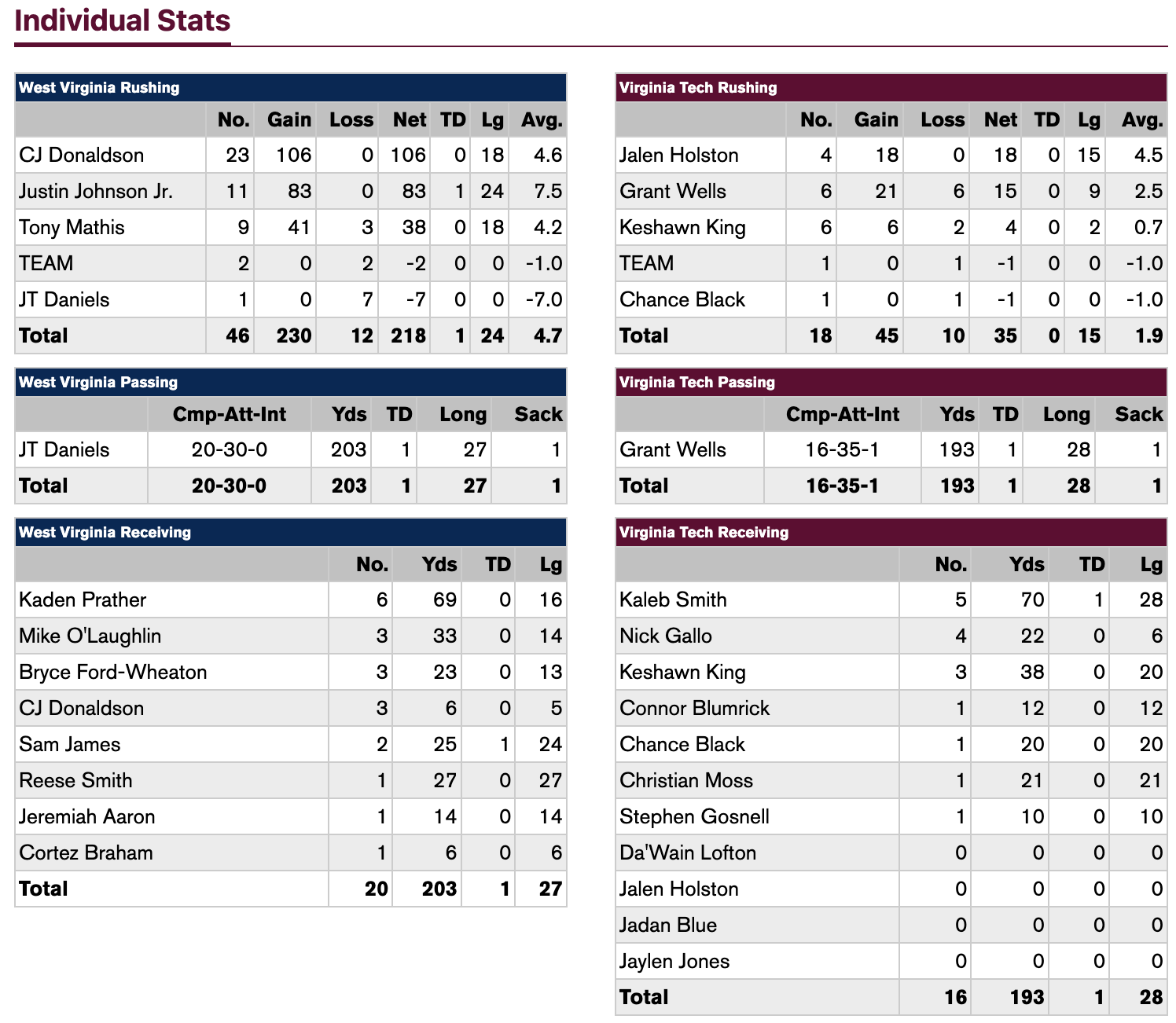 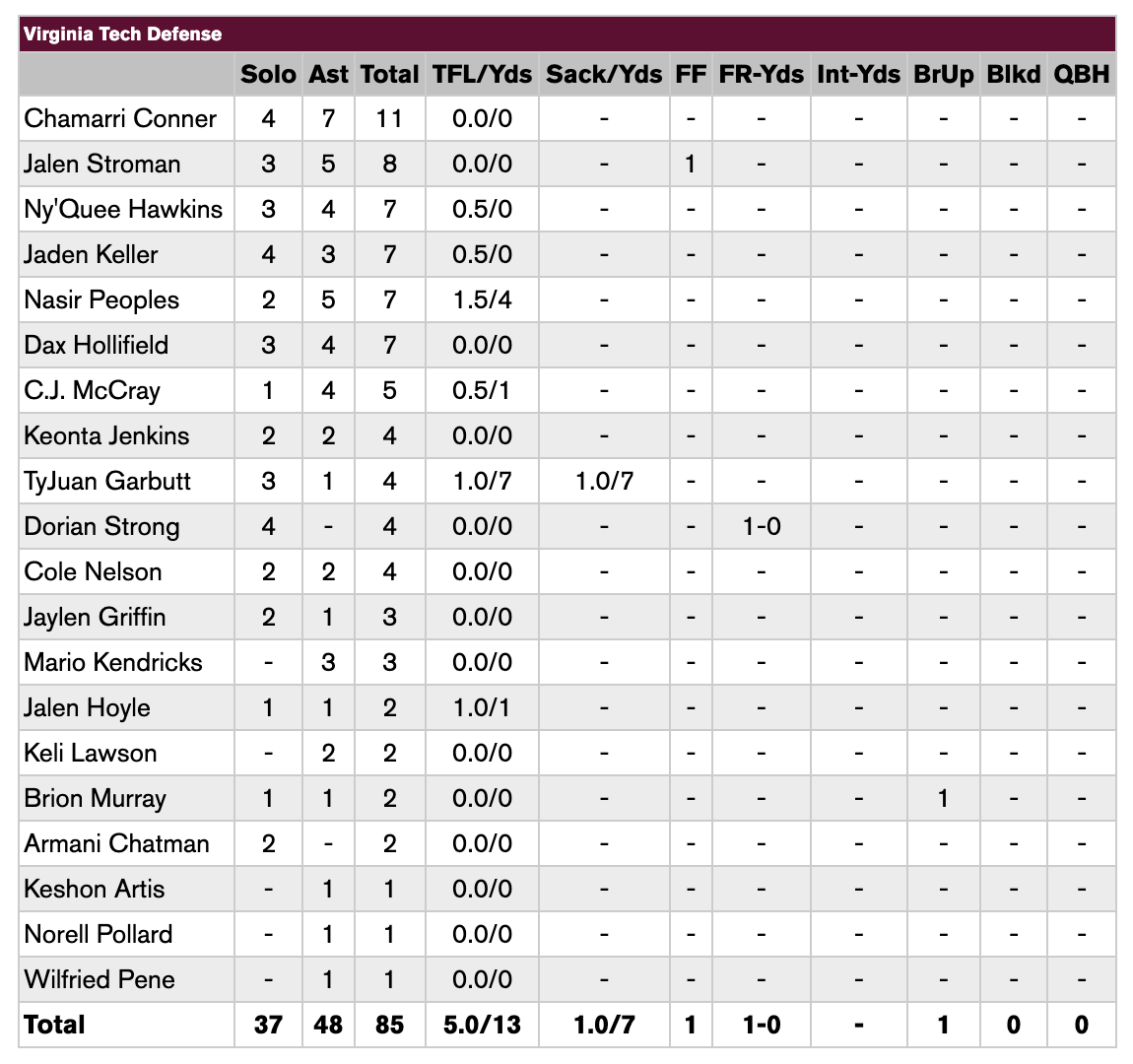