It took the Virginia Tech offense a few drives to find a groove on Saturday against Wofford, but once the Hokies did, it was enough to pick up their second win of the season against the Terriers in a 27-7 win at Lane Stadium.

“I thought we were able to move the ball and stay on schedule better,” Virginia Tech head coach Brent Pry said after the win. “We converted better on third down, we had some long, extended drives. We just weren’t as good in the red zone as you wanted. … I’d like to score touchdowns.”

Despite Tech racking up 156 yards on its first three possessions, it came away with just six points, courtesy of two field goals from Will Ross. But the fourth time was the charm.

It took a 12-play, 82-yard drive that lasted over five-and-a-half minutes for Virginia Tech to score its first touchdown. Jalen Holston carried the ball seven times for 35 yards on that series, and he scored the eventual touchdown.

It meant a lot to Holston, who told Tech Sideline after the game that he returned to practice this week for the first time in 26 days. A heel injury kept him sidelined up to that point, but he played on Saturday and had 16 rushes for 66 yards and a touchdown.

Had Grant Wells not connected with Jadan Blue on a third-and-19, Holston wouldn’t have had his chance. After a holding penalty, Wells hit Blue over the middle, who leaped up and made an acrobatic catch for a 29-yard gain, keeping the drive alive. Holston scored a few plays later.

“He made some great catches out there today,” Pry said of Blue. “And really helped us keep drives alive. So I hope that’s the kickstart to get him going, where he can be an impact player. … I’m happy for him.”

Blue was one piece to Tech’s puzzle against Wofford, and it was his first consistent action this season after dealing with a knee injury. He caught four passes for 61 yards, all in the first half, including a touchdown right before halftime. Blue capped off a 10-play, 64-yard drive when Wells found him wide open in the end zone, giving the Hokies a 20-0 lead over Wofford at intermission.

“It means a lot, that’s the best thing I can say,” Blue told reporters after the game. “I’m just grateful. That’s the best thing. I’m very grateful for that opportunity, and I’m thankful that I was able to make those plays when they came to me.”

Tech’s offense wasn’t perfect, but it got the job done. The unit put up 475 yards of total offense, 314 of which came from Wells through the air. He completed 26 of his 35 passes (74.2%) and threw two touchdowns.

Eleven different players recorded a reception, headlined by Nick Gallo and Christian Moss. They each had five catches, for 52 and 50 yards, respectively. Blue added four while Stephen Gosnell and Holston had three each.

“I thought I played well,” Wells said. “Made some completions to start drives, and then we had some big third down conversions that really helped the momentum of the offense. When you have drive starters like that, I think it helps.”

Kaleb Smith caught two passes for 36 yards but went to the locker room before halftime and did not return to the game. He stood on the sidelines without pads for the rest of the contest, and he got X-rays in the locker room. The staff is still evaluating his injury, but Pry said he seemed pretty good after the game. Smith hasn’t been 100% healthy since the start of the season.

However, even though the Hokies spread the ball around, the offense didn’t do anything particularly impressive. Wells hit true freshman Bryce Duke on a wheel route in the fourth quarter for a 27-yard score, the Leesburg native’s first collegiate touchdown, but there wasn’t much else.

The offensive line didn’t get any more of a push than it did in the first two weeks. Meanwhile, the running game averaged just 3.2 yards per carry, which is suboptimal against a FCS foe. Pry admitted Virginia Tech needs to run the ball better.

“We’ve got to pick up a fourth-and-one,” Pry said. “The thing I would say is this: I don’t want to take credit away from Wofford. Coach Conklin is a good defensive coach. … But we’ve got to be better than that.”

Tech’s starting five played the majority of the game too, outside of when Bob Schick relieved Kaden Moore and Silas Dzansi. The latter, Tech’s left tackle who went down injured in the third quarter, could’ve gone if needed, according to Pry.

As far as the defense is concerned, it played well, as expected against an offense that is transitioning offensive systems. Tech finished with four tackles for loss and three sacks, along with a forced fumble. With defensive end TyJuan Garbutt and defensive tackle Josh Fuga sitting out for precautionary reasons (along with running back Keshawn King), other defensive linemen had an opportunity.

At the center of it all on Saturday: C.J. McCray and Cole Nelson.

“We’re getting on the edges,” Pry said of the pass rush. “I think the quarterback’s feeling us. I think when people put the tape on, they’re going to say, ‘OK, we’re not going to be able to sit back here and hold the ball.’ We’ve got to keep it that way.

“We ran a bunch of pressures again today, mixed it up. We’re headed in the right direction. C.J. McCray, Cole Nelson. … In TyJuan’s absence, they stepped up.”

The Terriers recorded 199 yards of total offense, 161 of which came through the air. They had just 19 plays for 51 yards in the first half, so most of their production came when Tech had its backups in. Wofford did get on the board for the first time this season, though.

A six-play, 75-yard drive in the fourth quarter ended the Tech shutout. Wofford quarterback Jimmy Weirick and running back Nathan Rush moved the offense down the field, culminating in a three-yard run from Rush.

Overall, it wasn’t anything special from the Hokies. They took care of business and got some important reps to backups, such as quarterback Jason Brown. But a Thursday night showdown with West Virginia quickly approaches, one of the first big barometers for Virginia Tech this season.

The Battle for the Black Diamond Trophy starts a long, competitive stretch, and the Hokies have some work to do offensively if they want to make a statement. 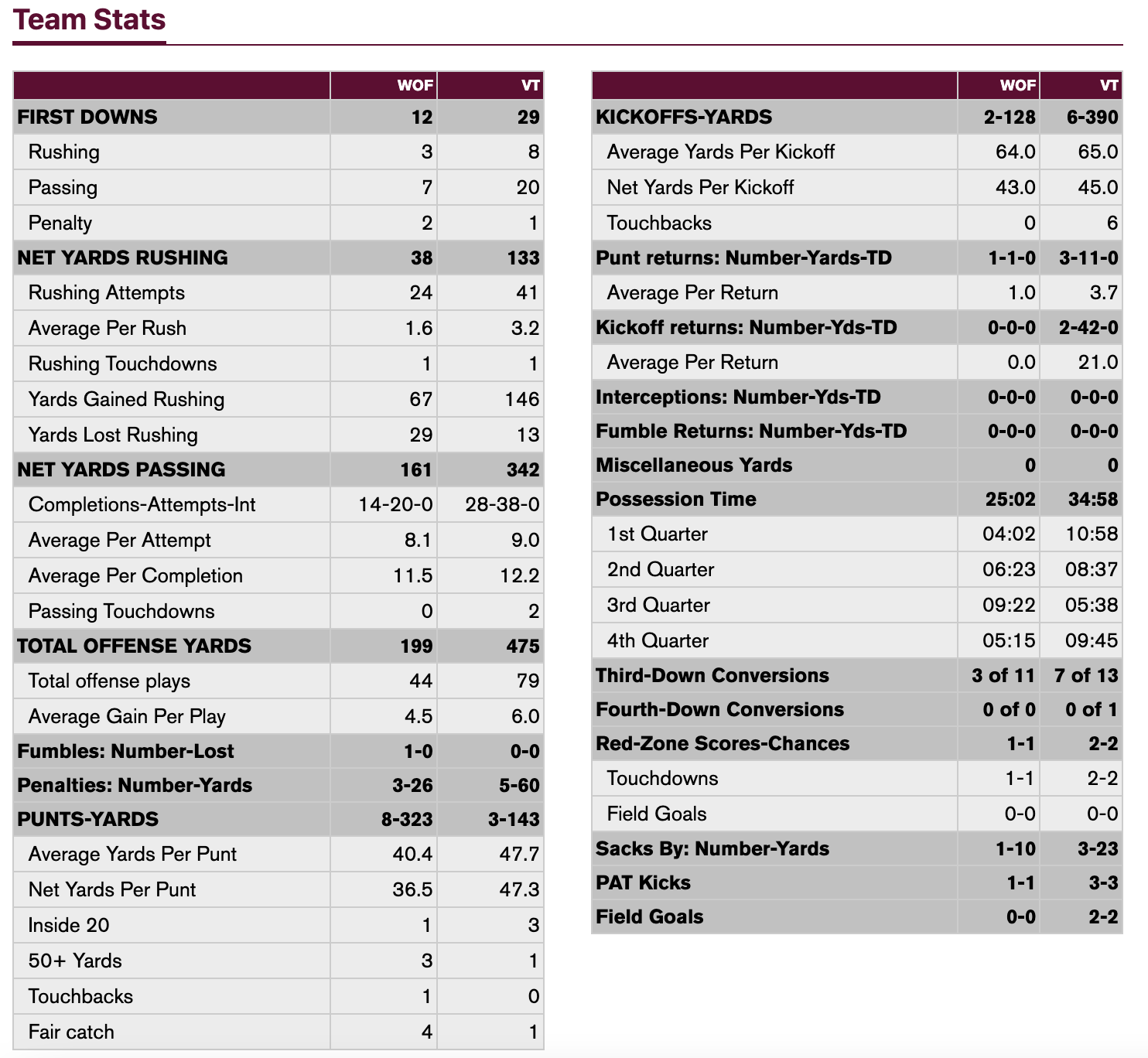 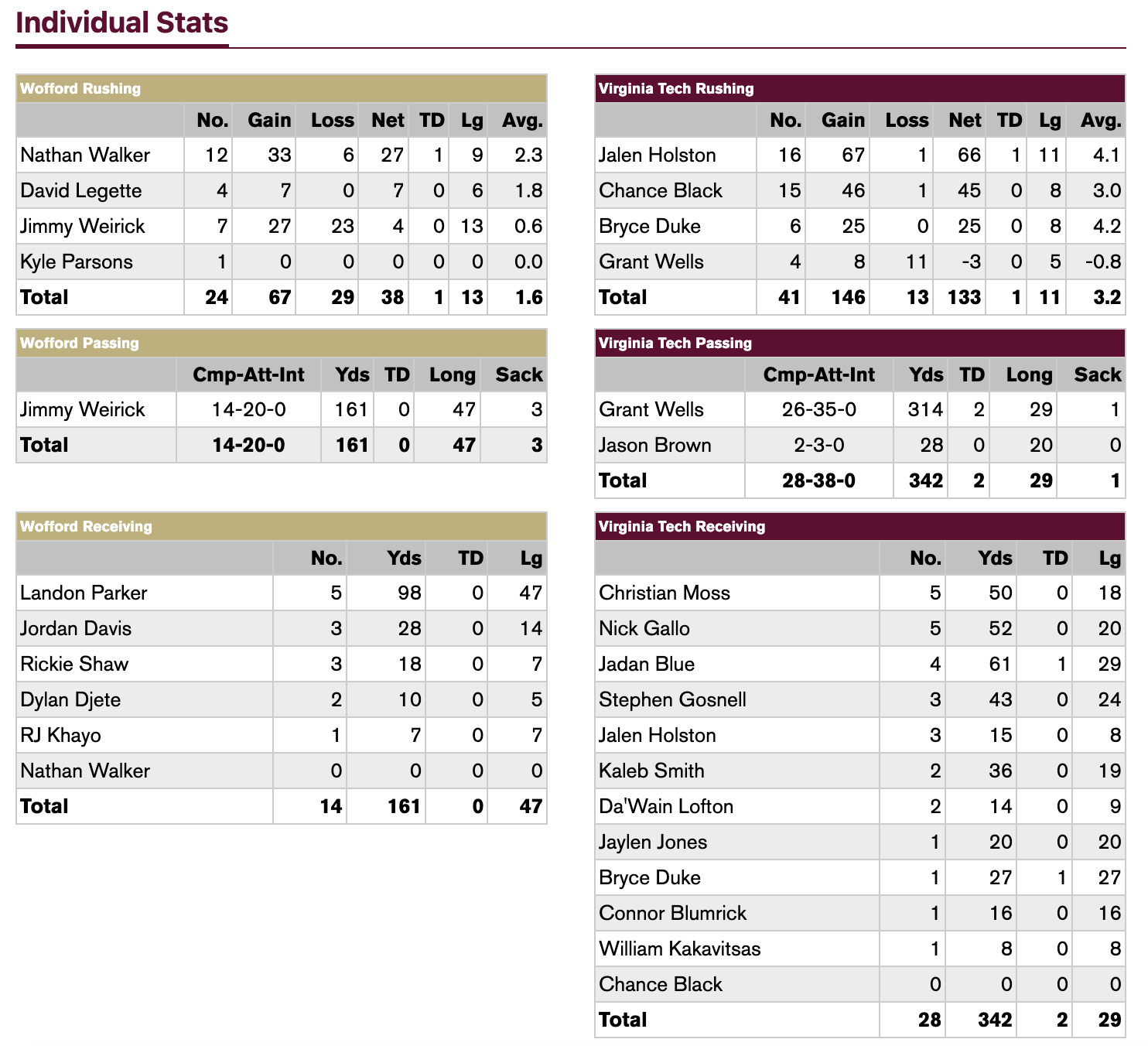 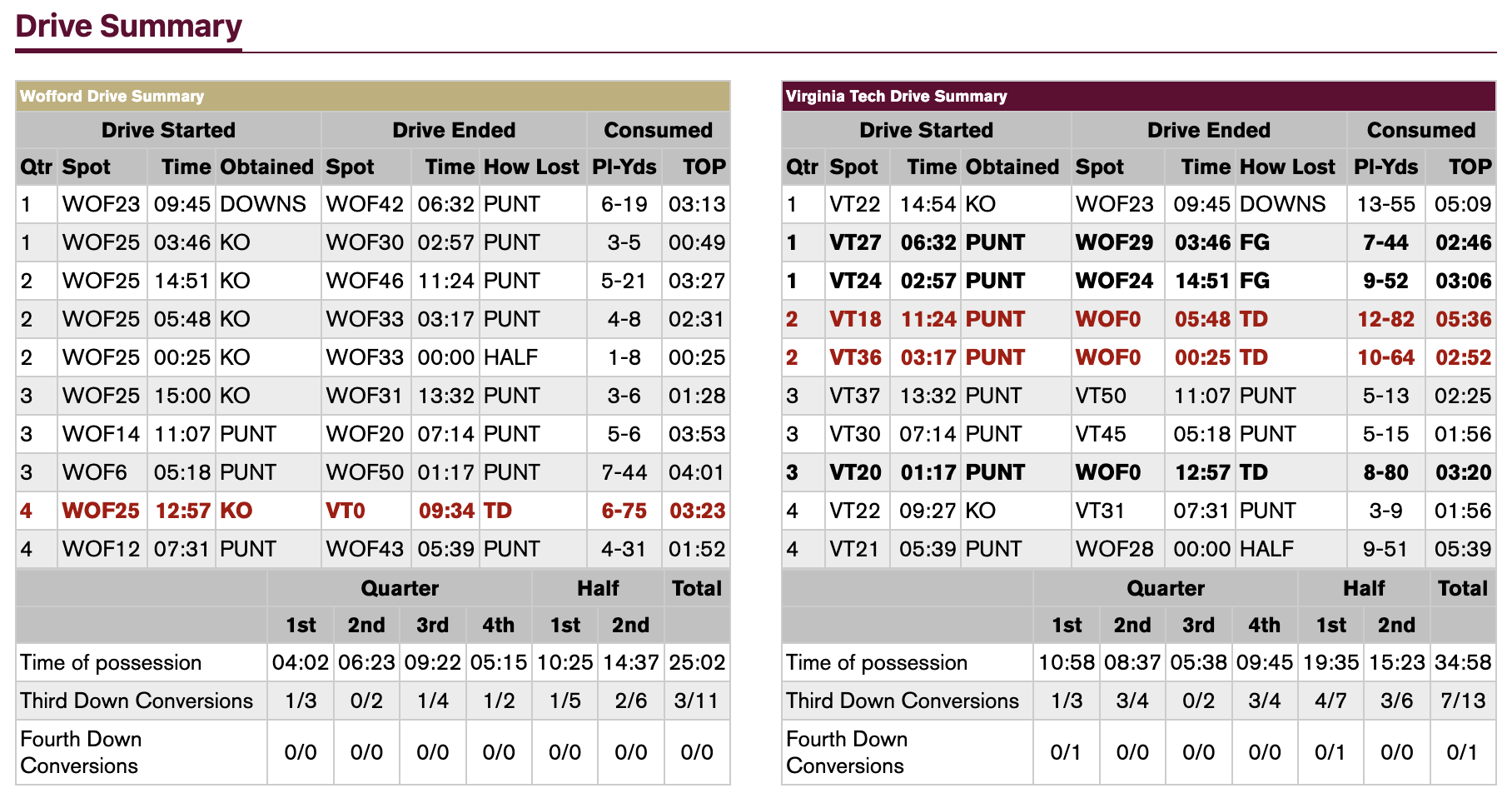 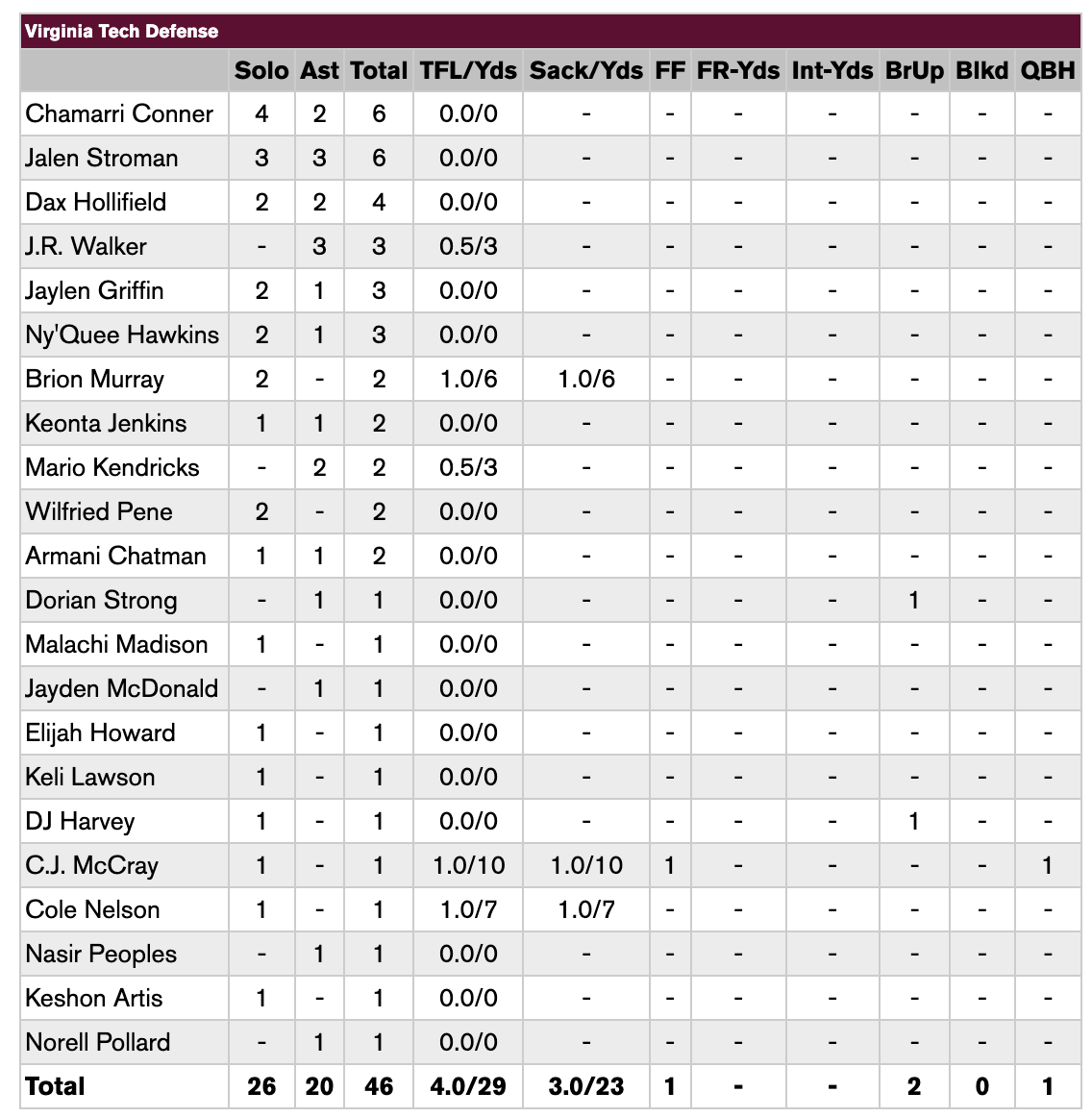