In Brent Pry’s first game as the head coach of Virginia Tech on the damp grass of Worsham Field in Lane Stadium, his defense barely missed a beat.

From the opening Boston College drive, which was just two plays because of Armani Chatman‘s interception, to TyJuan Garbutt abusing the Eagles’ offensive line, the Hokies had their way defensively. Combined with a few key offensive scores, Tech enjoyed a 27-10 win, its first of the season.

“We brought some pressure early, created some one-on-one situations with the front and then tried to mix it up,” Pry said afterwards of the defense. “Showed pressure, played coverage. And the guys got on edges. They did a nice job. We knew we had to get after the quarterback.”

In the season-opening loss at Old Dominion, Tech recorded just one sack despite getting plenty of penetration – seven tackles for loss, four quarterback hurries. But at home against a banged up Eagles front, the Hokies had their way.

They had 56 total tackles (10 for a loss), five sacks and five quarterback hurries. Boston College was 2-of-15 on third down, didn’t record a first down until its eighth drive of the game and finished with four rushing yards. That’s the lowest total against Tech since Florida State had -15 in 2012, but the Eagles were getting awfully close to surpassing that; with a few minutes left in the game, they were at -1 yards.

“Tackling’s a lost art, and I credit Chris Marve and the defensive staff,” Pry said. “They really put an emphasis on it. They got the guys triggering, and no hesitation. We were running through those guys and cutting them down. It was good to see. We’ve got to keep that rolling.”

Garbutt, a redshirt senior from Fredericksburg, seemed to be in the backfield on every down. He only had one tackle at ODU and has battled a minor injury that limited his practice time, but that wasn’t obvious against Boston College. Garbutt was a menace: three tackles, all for a loss, one sack, one forced fumble, four quarterback hurries and one pass breakup when he tipped a pass at the line of scrimmage.

“Coming back last Sunday, he [Brent Pry] was telling us like we played pretty well up front,” Garbutt said. “We got in the quarterback’s face last week a lot, but we didn’t get home at all as the defensive line, so we made it an emphasis. … I thought as a group, as a collective unit, as a defense, we just all wanted to play fast, play with relentless effort.”

Garbutt embodies a junkyard dog on the field, and he’s got the bling to prove it. In January, defensive line coach J.C. Price gave each of his players a chain with a dog bone on it. Their initials are carved into the front with their name on the back, and it’s meaningful to Garbutt. He doesn’t wear it on the field so no one tries to take it, but he didn’t need it on Saturday; his play spoke for itself.

“He’s a hard worker,” tight end Connor Blumrick said of Garbutt. “He’s really good at what he does, and he works on perfecting his craft every day. It shows out there with getting pressure to the quarterback.”

Boston College quarterback Phil Jurkovec, a highly touted NFL prospect, was rattled. He finished the game 15-for-28 with 135 yards, one interception and one touchdown. On top of that, he posted -25 rushing yards due to the five sacks.

Jurkovec’s body language indicated he was frustrated, something Garbutt quickly picked up.

“That’s what as a defense makes you kinda up the ante, like turn it up a notch,” Garbutt said. “Because when you see he’s getting frustrated, that’s a position where you got to keep your cool, really no matter what. If the quarterback is getting frustrated, it’s kind of like that’s our favor because he’s about to start playing for us.”

On the other side of the ball, it wasn’t a stellar night offensively for the Hokies. They were 5-of-17 on third down but they got the job done, starting with scoring off Chatman’s interception. The pick was returned to the Boston College 14-yard line, and though it took seven plays, Tech eventually powered it in on a fourth-and-one with Jalen Holston.

The offense scored on three of its first four drives. William Ross drilled a 49-yard field goal while Keshawn King went untouched and took an inside zone play 65 yards to the house. He didn’t see the field much throughout the rest of the game due to injury, but Pry said it’s minor and he’s day-to-day.

Soon after King’s touchdown, however, Tech’s offense slowed. Four of the next six possessions ended in punts, and Boston College found some footing.

A 14-play drive ended in a field goal from Radford native Connor Lytton to get BC on the board. A few possessions later, Jurkovec found All-ACC wide receiver Zay Flowers for a 49-yard play that ignited the drive, and Jaden Williams beat Brion Murray for a 17-yard strike to bring the game within one score.

All of a sudden, the pressure was on, but Grant Wells and Virginia Tech responded in a big way. Kaleb Smith, who dealt with an injury throughout the week, combined with Wells for a 43-yard pass that got the juices flowing. To cap off a nine-play, 78-yard drive, the two combined again for a two-yard touchdown, reasserting control.

“That’s what we didn’t do last week: the offense taking the reins and converting,” Pry said. “And a heck of a catch by Kaleb and a great throw by Grant to extend that drive and go down and score. That’s exactly what needed to happen and that’s what good football teams do.”

From that point forward, Boston College struggled. It punted three straight times while Tech kicked a 38-yard field goal to put the icing on the cake.

Most importantly, though, the Hokies didn’t make mistakes. They didn’t turn the ball over and committed just five penalties, a vast difference from the five miscues and 15 flags at ODU.

“I think we took care of some things that were obviously a thorn in our side last week,” Pry said. “We protected the ball. We attacked the ball. Big turnover to start the game, set the tone. And we minimized the penalties. … We made them earn it.”

Wells had a methodical approach and did a good job taking care of the football. Though the offense wasn’t firing on all cylinders for the entire game, Virginia Tech always had control. The group posted 284 total yards, 140 of which came through the air via Wells (16-for-25, 1 touchdown).

“He was steady, he was confident,” Pry said of Wells. “I thought he bounced back really well. He managed the game, he made good decisions, and we have a quarterback that will do that. And he made some nice throws in some big moments.”

Saturday was the start to ACC play that the Hokies were looking for. What’s more, they did it in a sold out Lane Stadium, bouncing back from the mess in Norfolk.

It was Pry’s home debut, too. He’s not one to let emotions get the best of him – James Franklin, his former boss, always advised to take a moment before the game and soak everything in – but it was obvious his first win was meaningful, especially in the fashion that Virginia Tech did it: hard-nosed defense with a hint of explosive plays offensively.

“I’m just so happy for the players, for the staff, for the fans,” Pry said. “The place was packed despite the weather. So this was a good win for the entire program.” 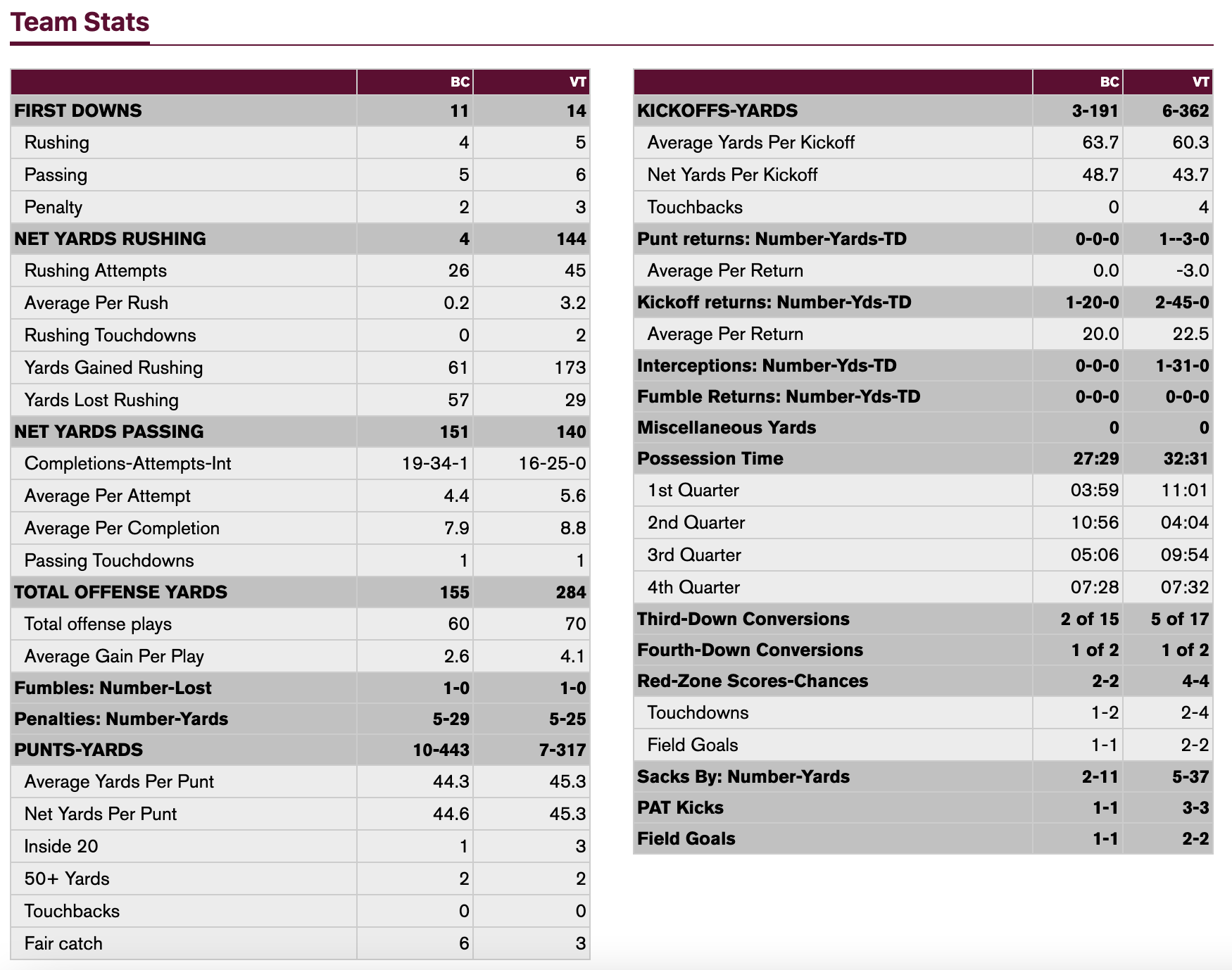 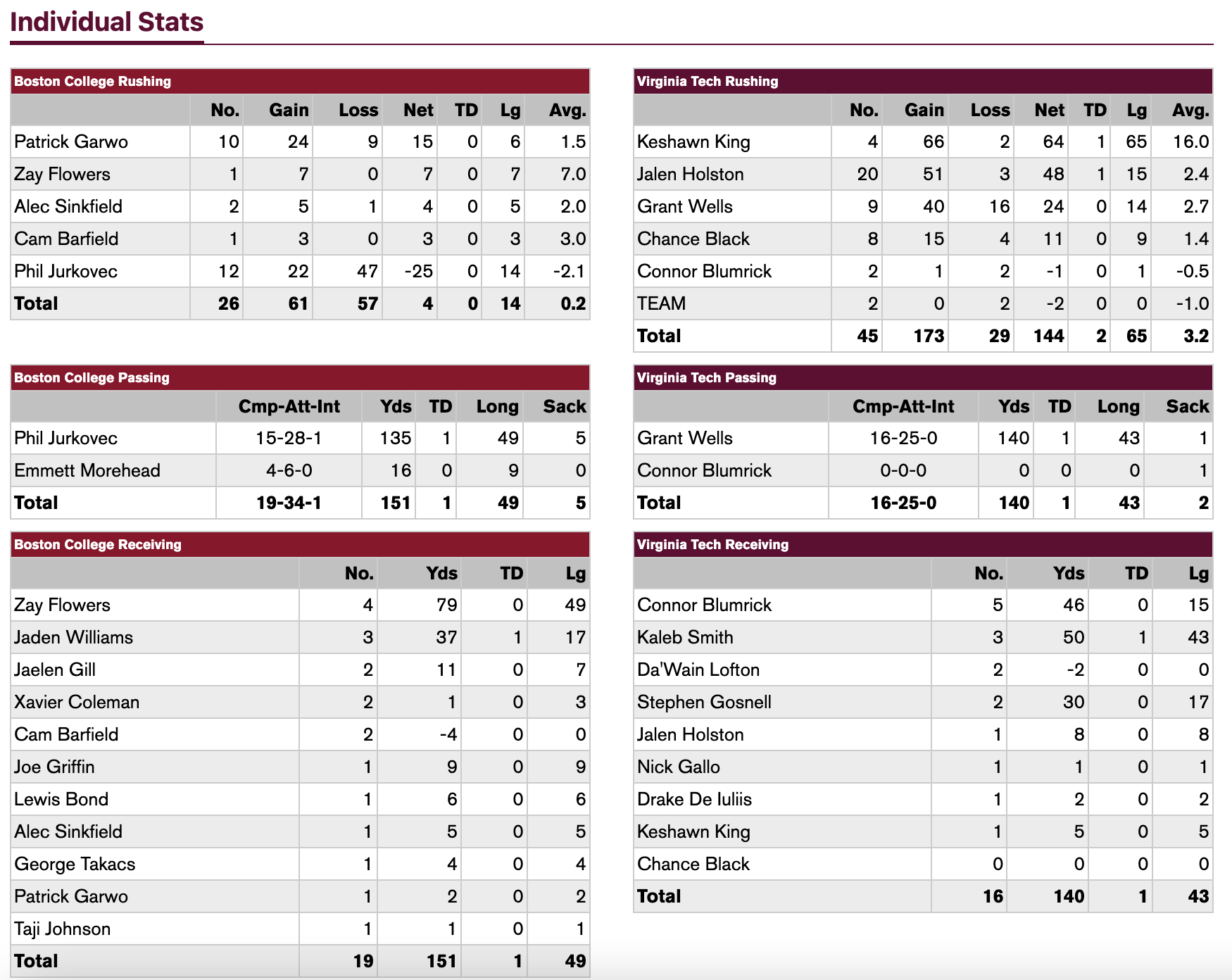 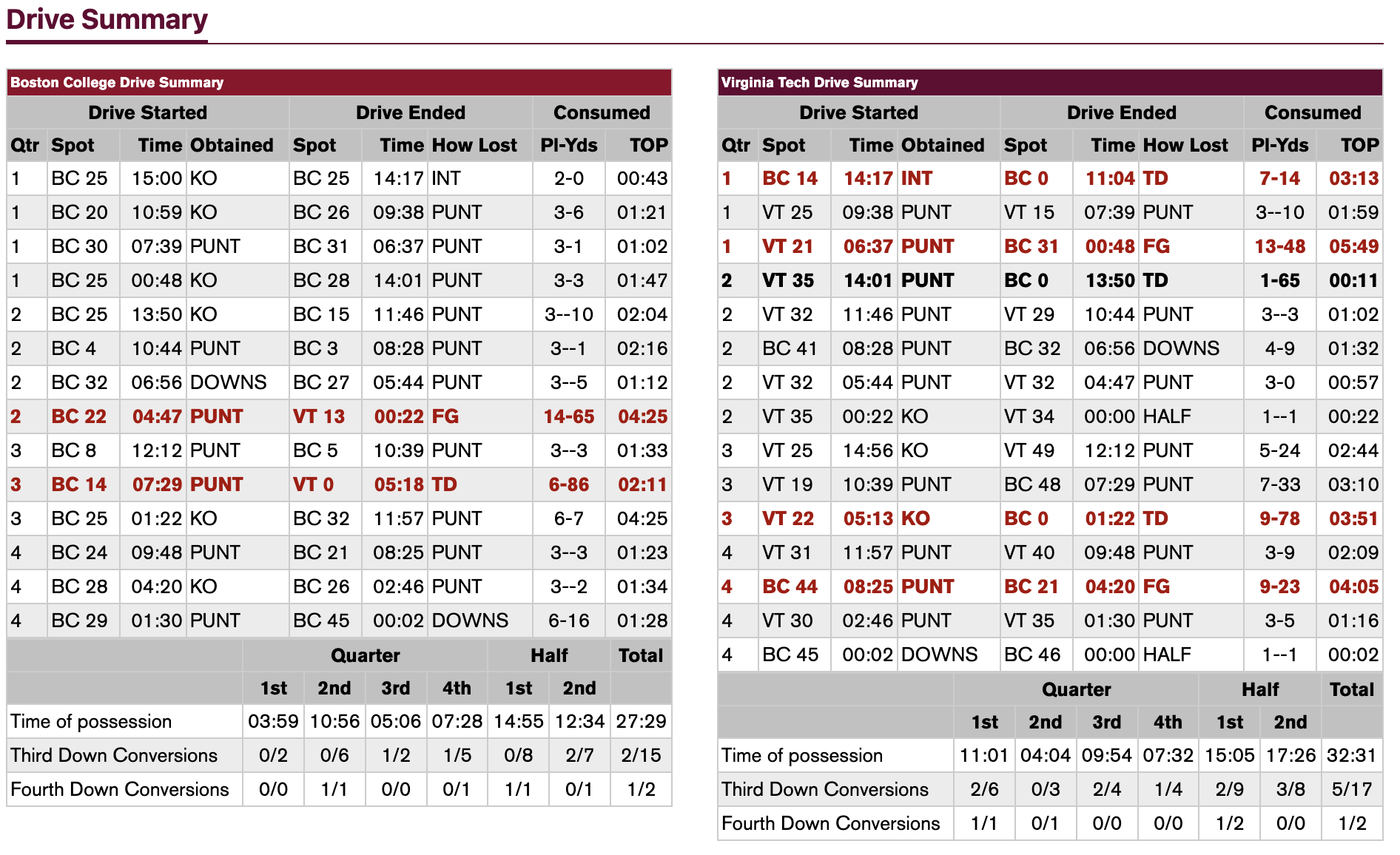 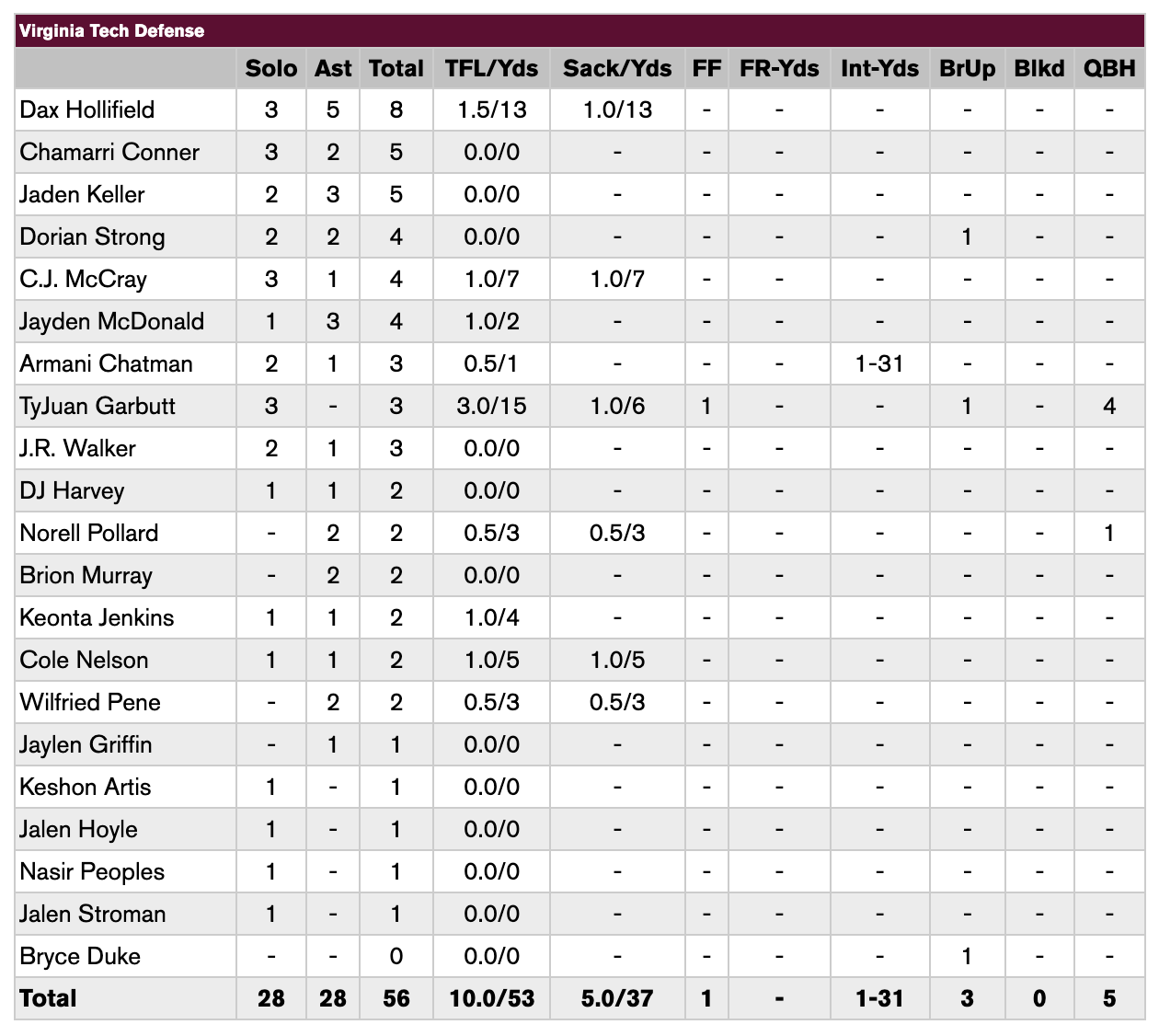