Over the past few months, non-conference scheduling information for Virginia Tech men’s basketball’s 2022-23 season has been reported. With new information on what the ACC scheduling format looks like, we’ll lay out the upcoming campaign for the Hokies.

College basketball reporter Rocco Miller broke a large chunk of Tech’s non-conference schedule on May 24. It was also previously reported in March that the Hokies would play in the 2022 Shriners Children’s Charleston Classic. In addition, Tech announced on June 6 that it will return to Brooklyn for a December matchup with Oklahoma State.

Here’s a snapshot of what that non-conference slate looks like, with some tidbits on each known opponent:

Mike Young & Co. will play at least three games in the Charleston tournament, and most of the potential competition had a solid 2021-22 campaign. Colorado State and Davidson were top-50 teams last year, while Furman, Penn State and South Carolina finished in the top 100.

Tech’s non-conference opponents last season finished with an average KenPom ranking of 174.6 and an average NET ranking of 173.8. Five of the 11 teams VT faced were in the top-100: Memphis, Xavier, Maryland, Dayton and St. Bonaventure.

With roughly six chances against solid competition — three Charleston Classic games, the Big Ten/ACC Challenge, Dayton and Oklahoma State — the slate for 2022-23 should be of very similar quality.

It is important to note, however, that Tech had three chances for Quadrant 1 wins in the non-conference schedule last year despite expecting to have more.

In theory, Tech’s 2022-23 non-conference slate should be close to last year’s in terms of level of competition, but with roster turnover and a hectic offseason, it’s hard to predict how much the landscape will change. The schedule also shouldn’t change since VT is at 31 games for the year: 11 non-conference games (eight plus a three-game tournament), and 20 conference games.

As far as league play is concerned, the ACC is using the same three-year scheduling matrix that it implemented in 2019. The official announcement from VT and the ACC came on June 17.

The 2019-20 opponents are the same as they were 2022-23. Miami and Virginia remain the Hokies’ two rivals, meaning they’ll continue to play twice each season, once at home and once away.

In 2022-23, Tech will play four other schools twice, both home and away: Boston College, Clemson, Duke and Syracuse.

Florida State, North Carolina, NC State and Pitt are the four schools the Hokies will only play at home. Their away-only opponents are Georgia Tech, Louisville, Notre Dame and Wake Forest.

Using numbers from 2021-22, Virginia Tech’s ACC campaign looks to be slightly more difficult this season. The average NET ranking of VT’s ACC opponents last year was 93.8; using the same data, the average for 2022-23 is 84.3.

Why such a big difference? Playing Duke, Syracuse and Clemson twice instead of Georgia Tech, NC State and Pitt is a large part of the answer.

To put it in perspective, the Hokies had just five Quadrant 1 opportunities in the ACC last season. Just one of those — vs. UNC on Feb. 19 — came at home, and at the time, it was a Quadrant 2 win. It wasn’t until the Tar Heels made a run to the Final Four that their NET ranking went up and it became a Quadrant 1 game.

By applying last year’s statistics to Tech’s 2022-23 schedule, the Hokies could have seven Quadrant 1 opportunities. Two of those would be at home — Duke and UNC — with five on the road — Duke, Miami, Notre Dame, Virginia and Wake Forest. 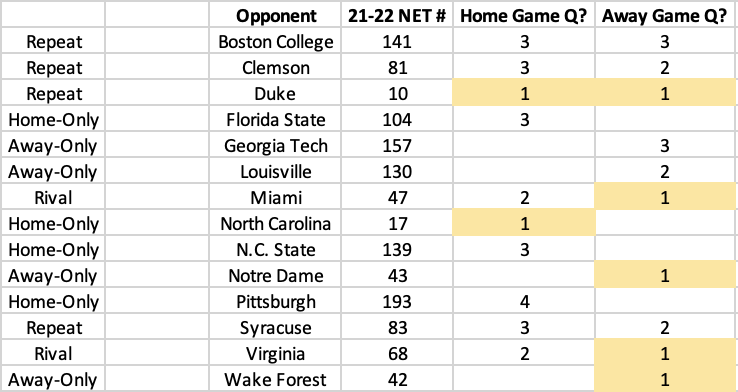 More so than last season, Virginia Tech should have a schedule that sets it up nicely for Selection Sunday, both in and out of league play.

Here’s a full breakdown of the ACC rotation for Virginia Tech over the next three seasons: