Fans were still walking from the parking lot — with maroon hats on, a cheap ticket in their pocket, an empty seat waiting for them inside the ballpark – when Virginia Tech took over English Field. With a twist.

As the designated visiting team in the Blacksburg Regional’s “1-0” game, it took just a few moments for the Hokies to fill the buzz in the park. Columbia’s JD Ogden lacked control, walking Carson Jones with the bases loaded after plunking Gavin Cross and Cade Hunter with a pitch and yielding a single to Tanner Schobel. It accounted for the first of many runs to score in No. 4 Virginia Tech’s 24-4 win over Columbia on Saturday night.

As a result, the celebratory “Hey! Hey! Hey’s!” in the third base dugout didn’t quit until the Hokies stopped scoring runs in the top of the ninth inning. The chants have become a tradition, just like the home run hammer, and all too common all season, if you ask their opponents. They scored 15 runs against Wright State on Friday and then scored 24 more to bury the Lions to the consolation bracket to face Gonzaga for a second time.

Tech will face the winner of Gonzaga-Columbia, who play in an elimination game at 1 p.m. Sunday afternoon. The winner plays VT at 7 p.m. later that night.

It’s the third time the Hokies have advanced to the Regional Final since 2010, but they haven’t made it past there yet. This year’s team is much more talented than in years past. In the Hokies’ past four games, they’ve scored 12 runs three times. Raw power and and pure talent goes a long way.

“Obviously, [it was] a really good night for our guys,” Tech head coach John Szefc said after the blowout win. “It’s very rare to see a score like that in an NCAA Tournament game. But you know, our guys played really well, so I’m just kind of happy that obviously with the outcome and the fact that our guys have put themselves in a really good position to come out here and win a regional tomorrow at home.”

Now back to the dugout in the top of the first.

Once Cross scored the first run of the game, the dugout high-fived, fist-pounded, shouted and celebrated Tech’s early lead. A runway was cleared for Cross down the dugout steps where a celebration was awaiting him. He hopped down the steps, shuffled towards his teammates and took off his maroon helmet to use as a prop.

That’s when the home crowd, still filing into the stadium, took notice of the dugout celebration because they clapped and cheered along with Cross and his teammates.

Even with the fans making noise, yelling and clapping, the Hokies’ shouts of “Hey! Hey! Hey!” could still be heard loud and clear up in the press box.

Columbia struck back with two runs off of Griffin Green, who was making his first start in 15 days, in the second inning. He departed once the inning concluded, setting up Jordan Geber’s latest appearance out of the bullpen. He surrendered a lead-off walk but quickly bounced back with a ground ball to Schobel at shortstop to turn a double play and then a second ground ball to Schobel that ended the inning.

That’s where all of Columbia’s offensive production stopped, while Virginia Tech’s was just beginning.

Conor Hartigan singled to lead off the fourth. Carson DeMartini walked. Nick Biddison was hit by a pitch that loaded the bases with one out. Cross struck out on a 3-2 pitch that nipped the zone, which set up Schobel’s bases-clearing double that gave Virginia Tech the lead back for good, 5-2.

Three runs had come around to score in the inning already with one out. After that? Eleven more. Fourteen total runs were scored by the Hokies in the top of the fourth – an ACC-era best.

And that set Biddison up for his inside the park home run. He lifted a high fly ball to left field that Cole Hage lost in the lights – the second of three occurrences for him on Saturday night. Once the ball landed, Biddison was already halfway to third and scored easily. Despite not hitting a ball that left the park, the Hokies gave him the home run hammer to slam into the turf.

“I put a pretty good swing on it, but I got a little under it,” Biddison said. “And then I looked up and kind of saw the left fielder holding his hands up like he didn’t know where the ball and [first base] coach [Tyler] Hanson is in my ear yelling, ‘Go! Go! Go!’ so I just started running. Once I hit second and saw the ball hit the ground, I knew I was going to score.”

But that was the 11th run of the inning. Tech added three more on Hurley’s second RBI single of the fourth and a two-run double off the bat of Hunter. All of that happened with one out – Cross’s bases loaded strikeout as the fourth batter of the inning. In between all of that, 13 straight hitters reached base, pushing the lead to 15-2.

“We have guys top to bottom, most of the guys you guys haven’t even seen take at bats yet,” Biddison said of what makes his team’s offense so special. “I think that having all of us on one offense is very dangerous. And Coach [Kurt] Elbin wants us to hit the ball hard. Swing the bat hard. That’s what happens.”

Once the inning ended, Geber trotted back out for his second inning of work. He yielded a solo homer, but the Hokies added three more runs in the top of the fifth — Cross hit a two-run shot to right, while Schobel scored on a groundout from Hurley. Soon after, Geber bounced back with a scoreless bottom half before handing it off to some of the lesser-used pieces in the Hokies’ bullpen.

And then Tech added on to the lead even more in the sixth. Hartigan’s groundout scored Jones and Biddison reached on a throwing error that allowed Eduardo Malinowski to score, extending the lead to 20-3. By then, Szefc had seen enough and began to use some of the depth pieces on the roster.

“If you look at our lineup top to bottom, there’s guys that hit the ball,” Hurley said. “Pretty much everybody can hit above 100 [miles per hour]. If you do that as many times as you can, it’s going to be a pretty good night.”

Ryan Okuda was the first to get the call. He tossed a scoreless bottom of the sixth before Gherig Ebel scored on a wild pitch to add another run to the Hokies’ total in the seventh. Okuda then worked around a one-out double by striking out the final two hitters in the seventh. That set up Nick Holesa’s run on a wild pitch once he reached on a walk in the eighth, and the Hokies’ scoring finally stopped once Ebel roped his first career home run over the left field wall, putting Tech up 24-3.

Sean Fisher yielded a bases loaded walk in the eighth and was relieved in favor of Grant Umberger, who got the final two outs in the inning. But by that point for Columbia, it was way too little, way too late. The Lions trailed 24-4 and didn’t put up much of a fight in the bottom of the ninth when they battled a combination of Umberger and Brady Kirtner for the final three outs.

Virginia Tech’s offense is dangerous – ask any team the Hokies have faced. Miami, NC State, Virginia. You name it.

Virginia Tech scored its most runs in a game since 2017 on Saturday night. Its offense looks like one of the best in the country night in and night out, and it’s been this way all season. Whatever pitcher a team throws out on the mound, Tech will more than likely crush.

Just ask Columbia. Or ask those fans that were still piling in during the early innings of the night if they could hear the noise. 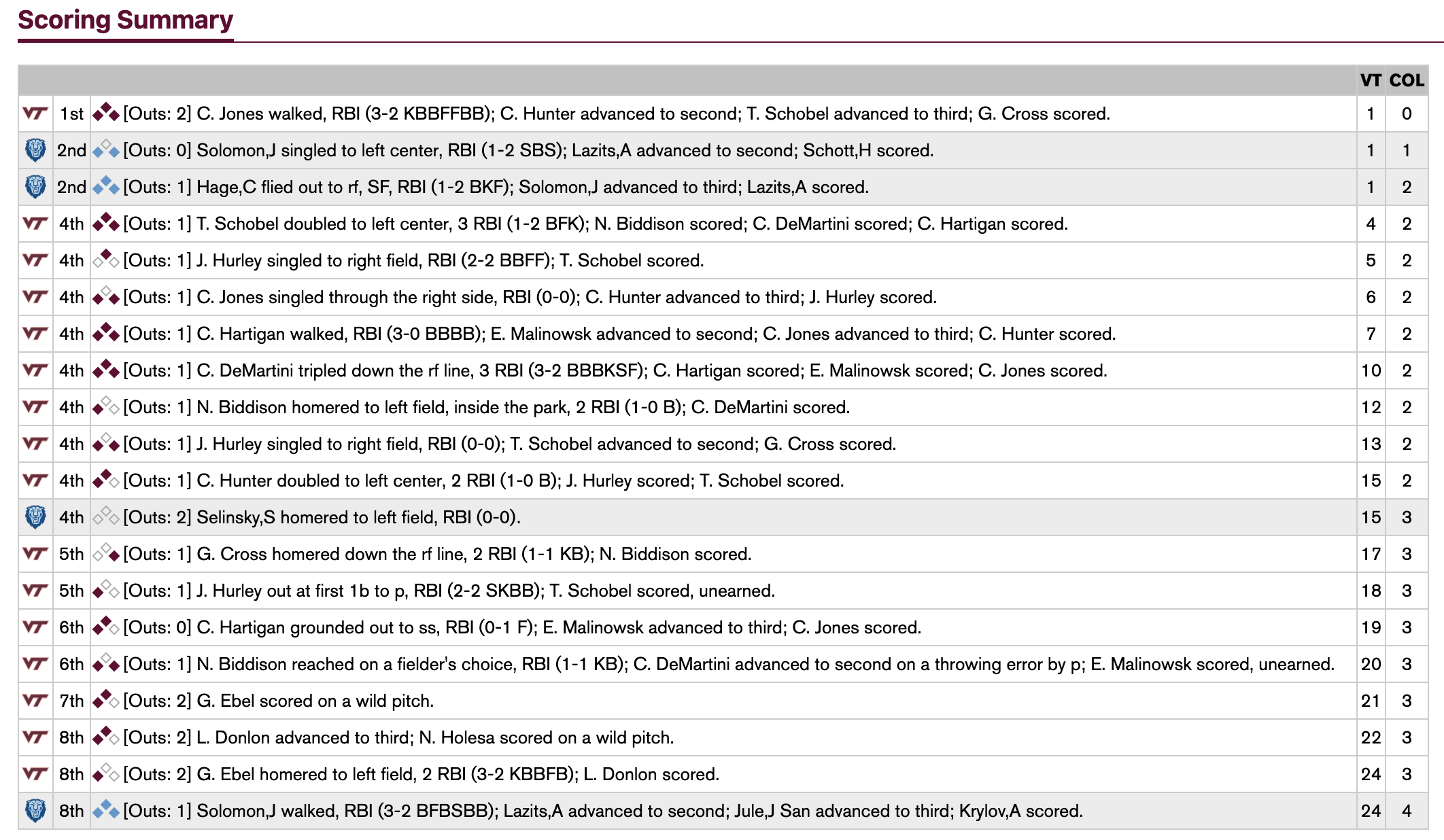