Here is the schedule for the Blacksburg Super Regional, although the current weather forecast puts Friday’s schedule in doubt.

No. 14 Florida finished fifth in the SEC with a 13-11 record. The program hosted the SEC Tournament and defeated Texas A&M (4-1) and Kentucky (9-3) before falling to eventual champion Arkansas (4-1).

The Gators bounced back in the regional round, however, sweeping three straight games. Florida opened play by run-ruling Canisius (RPI No. 123) 10-1, then followed up with a 7-1 win over Georgia Tech (RPI No. 23).

Wisconsin (RPI No. 8) made it out of the loser’s bracket in Gainesville to challenge the Gators for the regional title, but Florida made quick work of the Badgers on Sunday, scoring 10 runs in the first inning on the way to a 11-0 run-rule victory.

The Gators batted .461 (35-76) during the regional and had 10 or more hits in each game. Offensively, they put up similar numbers to the Hokies, but they arrive there in very different way.

Florida relies on speed and won’t hesitate to lay down bunts. The team is 14th in the country in stolen bases per game and has swiped 129 bases in 145 attempts, double the Virginia Tech numbers. At the same time, the Hokies average twice as many home runs per game. 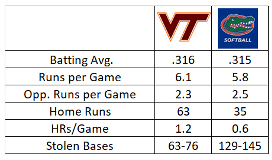 The top of the Gator lineup is particularly dynamic, hitting a combined .600 (18-for-30) in regionals. The Hokies will need to slow them down, which starts with keeping them off the bases.

Freshman Kendra Falby bats leadoff and is hitting .398 with 35 stolen bases in 39 attempts. She has amazing speed as shown in this inside-the-park home run against Mississippi State.

Fifth-year second baseman Hannah Adams usually bats second and is hitting .386. Adams missed three weeks of the season in late April and some analysts believe that her return has sparked the Gators to a different level of play. She made the All-SEC defensive team.

Alabama transfer Skyler Wallace (.394) bats third and leads Florida in home runs (7) and is sixth in the country in stolen bases per game (50 in 54 attempts).

As is often the case, the Hokies seem to have an advantage in the circle. 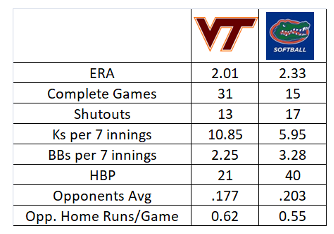 Freshman Lexie Delbrey (15-3, 2.21 ERA) got two of the starts for Florida in regional play and picked up two wins, surrendering a single run in seven innings. For the season, she has struck out 110 batters in 101.1 innings.

The Gators are solid in the field, ranking fourth in the country in fielding percentage (.980). They have committed only 34 errors this season (.5 per game). The Hokies’ numbers are slightly higher (.7 per game), meaning they’ll need to be sharp to handle the Gator speed.

Virginia Tech head coach Pete D’Amour knows his team will have to be prepared for the challenge from the Gators.

“They’re going to play great defense and they’re going to try and put pressure on our defense,” D’Amour told Tech Sideline. “They’re probably the fastest team we’ve played this year. We need to stick with our offensive plan from last weekend, limit the walks we give up and make the average plays on defense.”

The Hokies are coming off a resilient performance last weekend that saw them win three elimination games in 25 hours with approximately 5 hours sleep.

“We have a bunch of tough kids,” D’Amour said afterwards. “I am in awe of what they did.”

Leading the VT charge were two veterans who entered the Miami game hitting .271 or below but played an integral role in winning the regional for the Hokies.

Both Jayme Bailey and Mackenzie Lawter homered twice in the elimination games and drove in five runs each. Another veteran, senior Darby Trull, also had an outstanding weekend, hitting .454 (6-for-11). If that trio continues its torrid hitting this weekend, it will bode well for the orange and maroon bunch.

Emma Ritter continues to lead the Hokies in hitting (.397) and she and Cameron Fagan (.358) form a tough one-two punch at the top of the VT lineup. Freshman Bre Peck also had an excellent regional series, hitting .400 in the five games and making some crucial stops at third base.

After the championship game, Peck shared that she always watched softball growing up and told her family that she was “going to be playing on television one day.” She just didn’t expect it to be against the same Florida Gators she watched on the small screen in eastern Pennsylvania years ago.

Defense will be at a premium this weekend, so it won’t be surprising if Kelsey Brown starts in left field like she did in three of the five regional games. D’Amour has called Brown, Trull and Ritter the “best outfield in the conference” and, given the Florida team speed, there’s certainly logic in rolling with that alignment.

In the circle, Keely Rochard and Emma Lemley will continue to be the strength of this Hokie team. Lemley actually pitched one more inning than Rochard in the Regionals (16.2 vs. 15.1), but they combined for 42 strikeouts in 32 innings.

Both continue to be ranked in the top 10 in strikeouts per seven innings with Rochard second (11.6) and Lemley ninth (10.8). Florida batters average one strikeout per 6.6 at bats (approximately 4.4 per game), so something will have to give.

Interestingly, Florida has played nine more games than Virginia Tech and a remarkable 35 games at home compared to 19 for the Hokies. It pays to have softball weather all year round.

Overall, it appears that the Hokies may have played a slightly more difficult schedule. The NCAA’s RPI metric ranks the VT schedule as the eighth toughest slate with Florida’s being 18th.

The Hokies are 14-6 against teams in the RPI top 25 while Florida is 10-11. The two teams have played six common opponents this season with the Hokies faring slightly better as shown below. 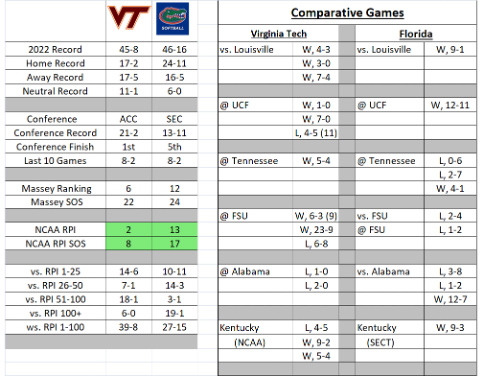 The Hokies quickly sold out this weekend’s games and certain hope their home field advantage (17-2) continues.

“We sold out our venue really quickly,” D’Amour said.  “Our players feed off of our home crowd. Last weekend was a great environment and we’re looking forward to another loud crowd this weekend.”

Florida is coached by Tim Walton, who is in his 17th year with the Gators. He is a five-time SEC Coach of the Year and led Florida to back-to-back National Championships in 2014 and 2015. Except for the COVID-shortened 2020 season, Walton’s Florida teams have earned a national seed (top 16) in the NCAA Tournament every year.

The winner of this type of heavyweight matchup certainly deserves that spot in the Women’s College World Series.

A storied Florida program taking on the new kids on the block. D’Amour’s scheduling plan was to be able to play this showdown in Tech Softball Park and it has worked out exactly that way.

D’Amour likes to say, “every play means something,” and that will never be more true than this series.

Last weekend was a challenge for the Hokies, but they overcame adversity in the most emphatic way possible. They will not get rattled should things not go their way early and the Hokies fans will bring it all game long. It should be college softball at its finest.

Below are individual player stats.