After a strong regular season, No. 3 Virginia Tech (41-7) begins NCAA Regional play Friday at 2 p.m. against NEC Champion St. Francis (Pa.) (37-16). The game will be televised on the ACC Network.

In the second game of the day, at-large selection Kentucky will face MAC Champion Miami (OH) at 4:30 p.m. That game is scheduled to be shown on ESPN+.

Regional play continues on Saturday and Sunday in a double-elimination format.

“We have a formidable regional,” Virginia Tech head coach Pete D’Amour told Tech Sideline after Sunday’s selection show. “I’m not sure there is such a thing as an ‘easy’ region. There’s no question that the aggressive scheduling helped us host this year. We put ourselves in a good position; now we need to go out and play.”

Although the Hokies were 40-6 during the regular season, they are coming off a mediocre performance at the ACC Tournament in Pittsburgh where they only scored three runs in two games.

“Our sample size is large enough now where our stats show we’re a good hitting team. We have the potential to catch fire in Regionals like we did in Tempe last year.”

Last year’s Hokies team also struggled in the ACC Tournament, only scoring four runs in two games. However, they exploded for 24 runs in the three games of the Arizona State Regional, which they swept.

“We just didn’t swing the bats like we should have [in Pittsburgh],” designated player Meredith Slaw said. “We just have to learn from that and move on. This weekend is what matters.”

The Blacksburg Regional will include four teams that have shown to be offensive forces during the regular season. Each team has a team batting average over .300 and averages over five runs per game.

The difference may come down to pitching and, on paper, the Hokies’ 1-2 punch of Keely Rochard and Emma Lemley should give them an advantage – especially when it comes to strikeouts.

The Red Flash won the Northeast Conference Tournament for the fifth straight season, the longest streak in NEC history. Each conference title qualified St. Francis for the NCAA Tournament, where the program has gone 1-8. The lone win was against New Mexico State in 2017.

The Red Flash have won their last 10 games with their last loss being a 5-1 defeat to Fairleigh Dickinson on April 23. During that win streak, they have scored outscored their opponents 91-15, capped off with a 9-0 win over Long Island University in the conference title game.

The top of the batting order is dynamic with fifth-year infielders Mekenzie Saban and Jordan Pietrzykoski leading the team in hitting.

Pietrzykoski is second on the team in both batting average (.335) and runs scored (35)

The Red Flash also have strong pitching, although it’s primarily limited to two arms. Juniors Grace Vesco (16-8, 1.93 ERA) and Rachel Marsden (20-8, 2.28 ERA) have pitched 97% of the innings. They have complete games in 41 of their 52 starts and have struck out 301 batters in 330 innings. Marsden was the NEC Pitcher of the Year.

Defensively, teams have been able to run on the Red Flash. 72 of 76 opposing base runners have successfully stolen bases.

Kentucky is in the NCAAs for the 13th consecutive season but is not hosting a regional for the first time since 2015.

The Wildcats had an overall record of 35-17 during the regular season, 13-11 in the SEC. They were eliminated in the quarterfinals of the SEC Tournament by No. 5 Florida, 9-3. It was their fifth loss in their last ten games.

Kentucky led the SEC in hitting last year (.324) and finished second this season (.332). As far as scoring is concerned, the program was tenth, averaging 6.83 runs per game.

At the plate, the Wildcats are led by All-American Kayla Kowalik who is hitting .413 this season – five points below her career average of .418. She leads off, has 94 career walks, an on-base percentage of almost .500 (.492) and has scored over 200 career runs.

Graduate student Lauren Johnson typically bats second (.412) and has started over 220 games at UK. Sophomore Erin Coffel (.412) bats third and leads the Wildcats in home runs (17) and runs batted in (58). Senior Renee Abernathy (.331) usually bats cleanup and is second on the team in home runs with 13.

The weakness of this Kentucky team appears to be pitching thanks to a team ERA of 3.67. The Wildcats have given up 72 runs in their last 12 games. They have seven players who have seen work in the circle this season and will change pitchers often (only 15 complete games all season).

Sophomore Stephanie Schoonover (6-4, 5.31 ERA) leads Kentucky in starts this season with 14. Moreover, seven of those starters have been in the last 18 games. Her last two appearances have been in relief roles.

Junior Miranda Stoddard (5-4, 3.80 ERA) has started 12 games this year, including the contest vs. Tech in Florida (a 6-1 VT win), but has not gotten a start in over a month. She gave up three hits and one run in four innings of work to VT. When not starting in the circle, she will start at third base.

Senior Tatum Spangler leads Kentucky in ERA with a 1.77 mark. She has started only five games all season, but every appearance has come in the last ten games.

The Hokies gave Kentucky their first loss of the season on Feb. 13, registering a 6-1 win that was called after six innings because of time constraints. Slaw broke the game open with a pinch-hit grand slam and Rochard threw a complete game four-hitter, striking out eight.

Miami (OH) finished with an overall record of 39-15-1, 24-5 in Mid-American Conference play. The RedHawks won the MAC Tournament with an 11-0 win over Bowling Green, guaranteeing their sixth NCAA appearance and their second consecutive one.

Miami is coached by former Hokie assistant coach Kirin Kumar, who is in her second year. Kumar replaced another former Hokie, Clarisa Crowell, who left the RedHawks for Penn State in 2020.

The RedHawks got off to a rough start this season, posting a 4-10 record to begin the year. That included an 8-0 run-rule loss to Virginia Tech on Feb. 26, a game in which Emma Lemley threw a four-hit shutout. However, Miami is 35-5-1 since, including wins in 24 of its last 27 games (with one tie). One of those wins was a 7-5 victory over Kentucky on March 16.

Miami has a powerful offensive attack that ranks third in the country in home runs per game at 1.98 behind only Oklahoma and Wichita State. Sophomore infielder Karli Spaid leads the team with 27 homers, good enough for second in the nation at 0.49 HRs per game. Spaid also leads the country in total bases with 170.

With a .420 average, Spaid also leads the RedHawks in hitting. She has plenty of assistance, however, with six other teammates hitting over .300, including former Hokie Kate Kobayshi. 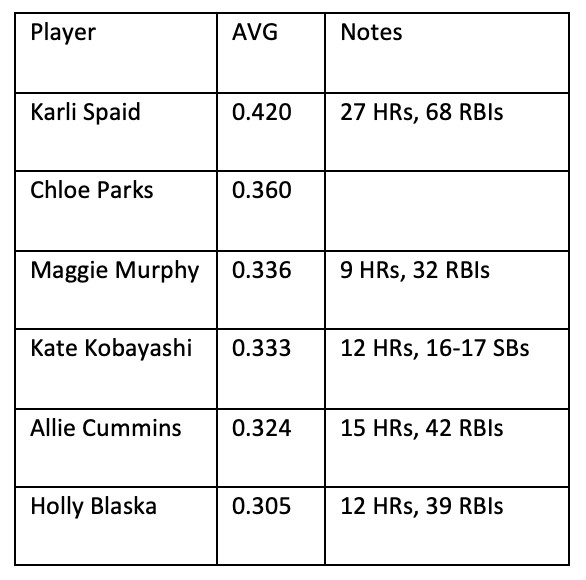 As the host team and No. 3 overall seed, Virginia Tech is considered the favorite. The Hokies have both solid hitting and great pitching, and they beat both Kentucky and Miami during the regular season.

However, the Hokies haven’t been the same over the last few weeks. If they can find their form again, they could advance to the Super Regionals next week, which they would host against the winner of the Gainesville Regional. 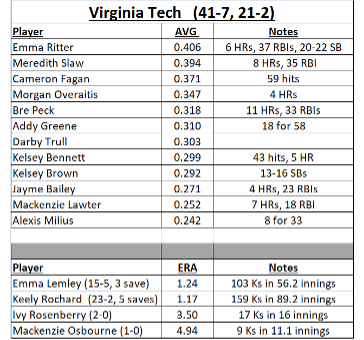 Below is a complete tale of the tape of the Blacksburg Regional participants. 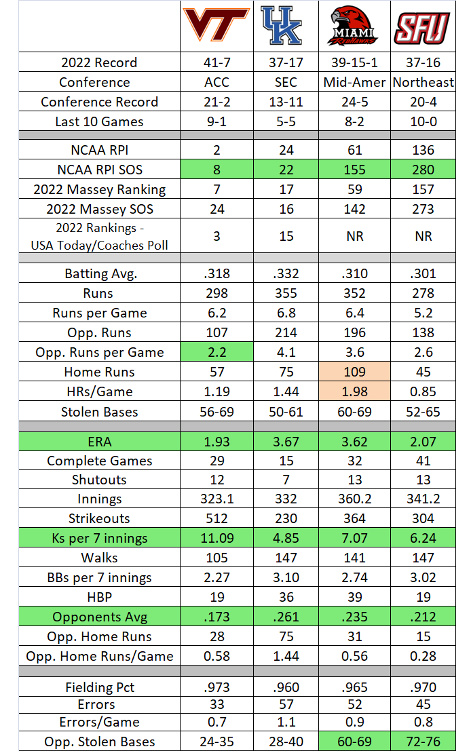