Coming off the best regular season in school history, No. 2 Virginia Tech (40-6, 21-2) travels to Pittsburgh this week for the ACC Tournament.

The tournament, which includes the top-10 teams in the conference, starts on Wednesday with two play-in games between the teams that finished 7-10. The first three days of games are scheduled to be televised on the ACC Network with Saturday’s championship game slated for ESPN2.

Pittsburgh temperatures are forecasted to be in the upper 70s and into the 80s all week with a chance of thunderstorms on Saturday.

Below is the complete bracket: 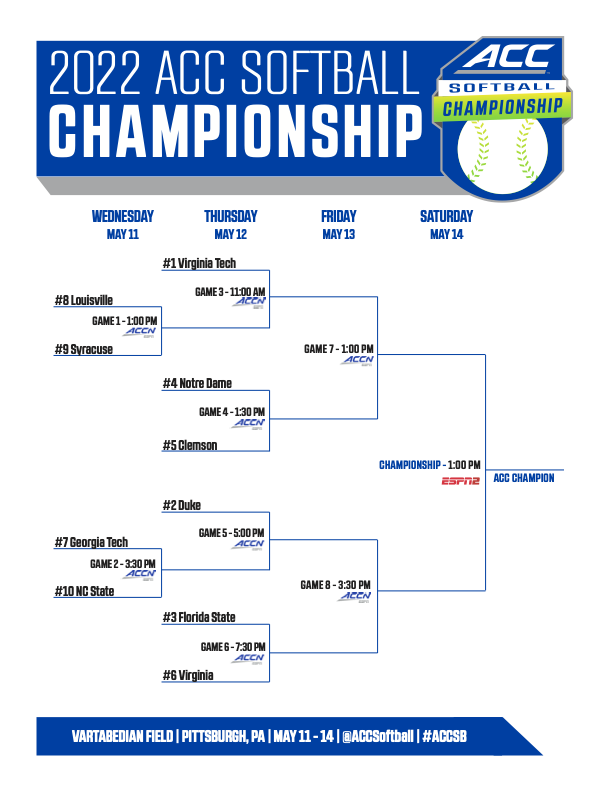 The tournament looks to be the most competitive in ACC history, with four teams in the running for NCAA Regional hosts spots.

The Hokies and Florida State appear to be locks for top-eight seeds, ranking No. 2 and No. 3 in the RPI, respectively, with Duke (9) and Clemson (11) in good shape for top-16 seeds. The top 16 teams will host Regional play at their home park and the top eight will also host Super Regionals the following week, should they continue to win.

Notre Dame (18) and Georgia Tech (23) appear to be comfortably in the NCAA field as well, with Louisville (40) likely needing an impressive showing in Pittsburgh to punch its ticket.

“The potential for four teams hosting from the ACC speaks to the depth of the conference this year,” Virginia Tech head coach Pete D’Amour told Tech Sideline. “The ACC has been pumping resources into their softball programs and it’s showing. Hopefully we’ll continue the upward trend in the years to come.”

On paper, the Hokies appear to be a slight favorite to bring a tournament title back to Blacksburg. Virginia Tech has won 29 of its last 32 games, dropped only two games in conference play, swept six ACC opponents and takes a nine-game winning streak to Pittsburgh.

For the year, the Hokies have seven starters hitting over .300:

Speaking of the Seminoles, FSU also appears to be peaking at the right time.

After losing the opening two games of a series to the Hokies in early April, the Noles have won 13 of their last 14, including two wins over No. 7 Oklahoma State and a victory over No. 10 Florida. Sandercock leads the nation in win percentage with a 26-1 mark, her only blemish coming against the Hokies. Florida State also leads the country in fielding percentage at .983, having committed only 27 errors all year.

Last year’s ACC Tournament was dominated by pitching with an average final score of 3-1. Five of the nine contests were shutouts – a feat that may be harder to duplicate this season with the 200-foot dimensions of Vartabedian Field.

D’Amour is pleased with his team’s performance this season.

“I’d have to grade our regular season as an A,” D’Amour said. “Our record against this schedule is pretty remarkable when you think about it. This is the most well rounded team I’ve been a part of since arriving at Tech. All of our teams at VT have been talented, but this year’s team seems to genuinely enjoy playing with and for each other. I’m not saying our other teams didn’t, but this team is extremely tight knit.”

The Hokies haven’t played in over a week, but D’Amour doesn’t think there will be any rust.

“Maybe I’m naïve, but I haven’t even thought about the eight-day layoff,” D’Amour said. “We go into every season knowing we’re going to have this break. We’d be more than happy to host somebody the weekend before the conference tournament, but it’s not realistic with other conferences playing. We settled on Sunday by playing the best team we’ve played against all year – ourselves!

“Headed to Pittsburgh, can we continue to swing and manage at bats like we did against Liberty? Can we be a little bit sharper and fresh in the circle? Those are the two keys for the weekend.”

Tech Sideline will have full coverage from Pittsburgh throughout the week. Tech will play either Louisville or Syracuse at 11 a.m. on Thursday in the second round.

Below is the tale of the tape for the Hokies’ first round game on Thursday along with comparisons with FSU, Duke, Notre Dame and Clemson. 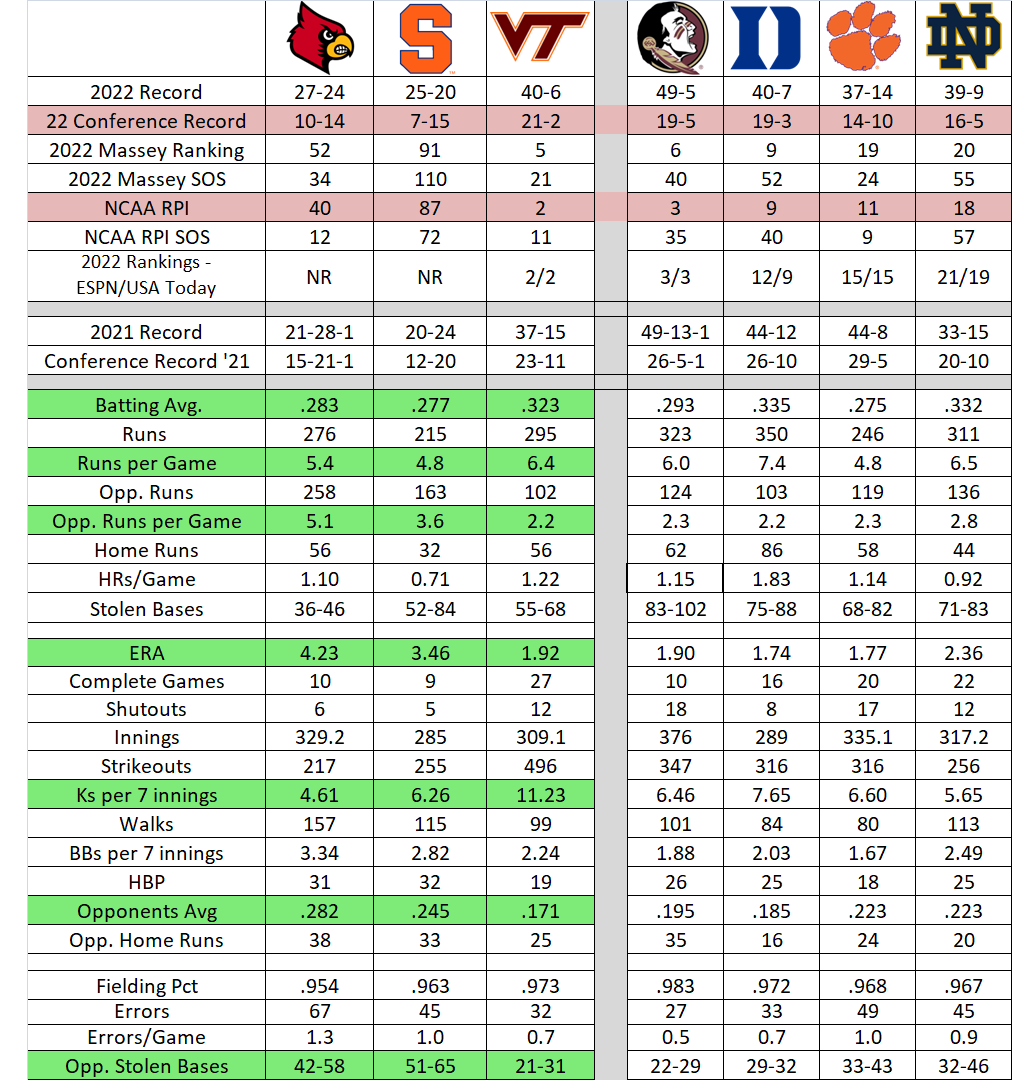