It’s been a month since the end of the 2021-22 college basketball season. Since then, offseason attrition has picked up, and Virginia Tech has been heavily involved. Let’s get up to speed on what players have transferred in and out of the program, the Hokies’ scholarship situation and who they are pursuing in the transfer portal.

It’s important to note that the spring signing period ends on May 18. High school recruiting has mostly come to an end, and any additions for Virginia Tech will most likely be made through the transfer portal. On top of that, May 1 was the deadline for current student-athletes to enter the transfer portal, so the names floating around will not change now.

Ins And Outs For Virginia Tech

Below is a list of Hokie players from the 2021-22 season, organized by their projected 2022-23 class, and their announced decision. Six players are leaving the program, one has yet to make a decision, and there are five newcomers.

Players that are staying with the team, like Hunter Cattoor, Darius Maddox and Sean Pedulla, are not listed.

*Indicates player has an extra year of eligibility due to COVID

Here’s a snapshot with two different tables – one by class, one by position – that portray Virginia Tech men’s basketball’s future scholarship outlook: 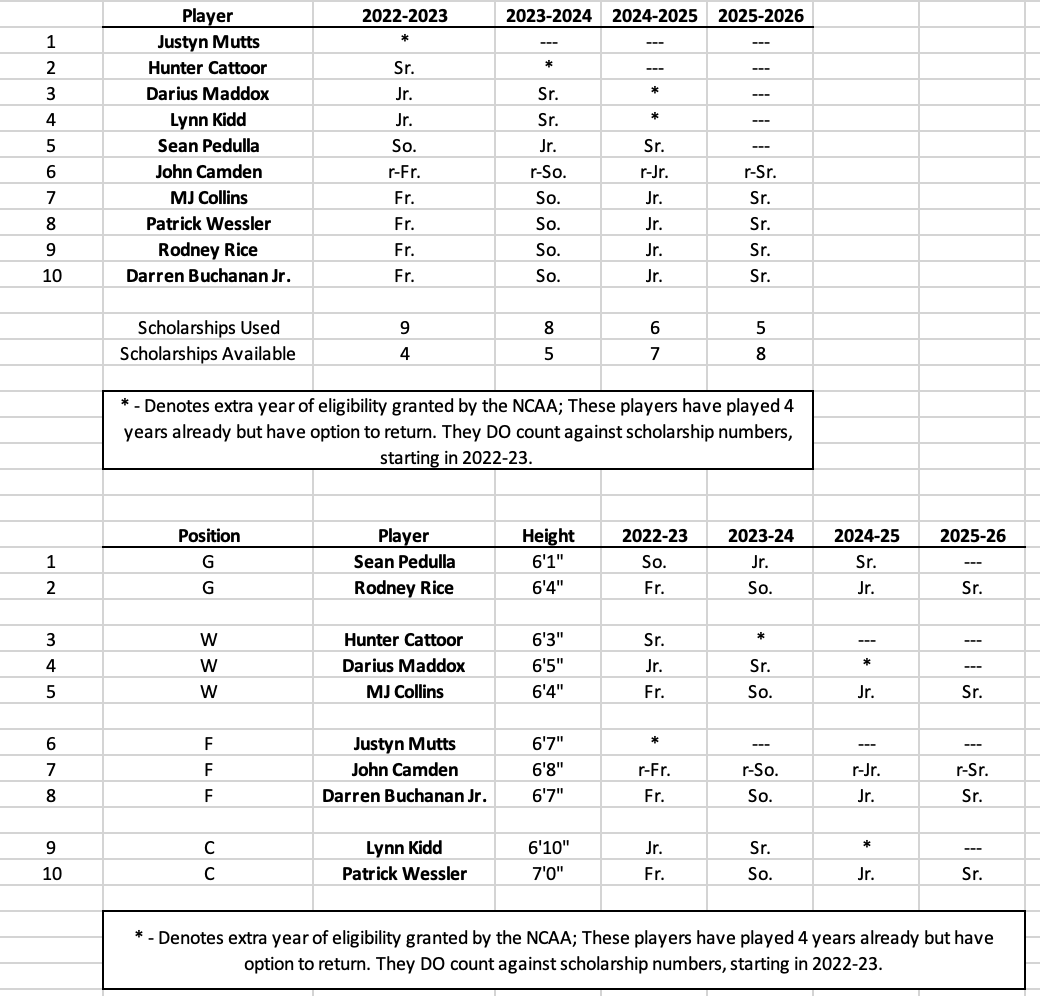 Pending the Mutts decision, the Hokies have three open scholarships for 2022-23. Should Mutts decide not to return to Blacksburg, Tech would have four slots available.

Names Off The Board

Like all schools, Virginia Tech has targeted a handful of transfers this offseason. The eight prospects listed below are players the Hokies reached out to or had a previous connection with, but they have all committed elsewhere.

Mike Young & Co. heavily pursued Reid, an LSU transfer from Richmond, and he visited Blacksburg on April 22, the same weekend as DeMatha Catholic’s Tyrell Ward (committed to LSU) and John Camden of Memphis. Camden committed to Tech on April 25.

Below is a list of seven potential transfer portal prospects that are on Virginia Tech’s radar.

The program obviously has multiple scholarships to hand out, so the actual list is likely larger than seen below. However, this is a compilation of players that have reported Tech reaching out to them in the past few weeks.

Basile is high on Tech’s list, and he visited Blacksburg on April 13. Notre Dame, Wisconsin and Iowa State appear to be the other three schools in contention, and it’s important to note that he’s a Wisconsin native. Basile has two years of eligibility remaining if he chooses to use his COVID year. He entered the portal on March 22.

Osunniyi had eight points (4-6 FG) and four blocks in 21 minutes when the Hokies and Bonnies met in December. He was named the A-10 Defensive Player of the Year in back-to-back seasons and averaged 11.3 points, 7.5 rebounds and 2.9 blocks per game this year. Osunniyi has one year of eligibility remaining and entered the portal on April 30.

Udeze is a 6-8 forward with one season of eligibility remaining. He listed his top eight schools on April 20 and Virginia Tech was included in the mix. Maryland, LSU, Texas, New Mexico, UNLV, Georgia Tech and Ole Miss are the others. Since, Udeze has visited UNLV. He entered the portal on April 6 after averaging 10.1 points and 6.1 boards this year.

Poteat has three years of eligibility remaining, and he recently visited Pitt. Pittsburgh Sports Now reported that he will also visit UMass and Virginia Tech. He started all 33 games for the Owls this season, averaging 7.7 points and 4.2 rebounds.

A former 3-star recruit in the 2020 class, Njie entered the portal on March 25. SMU, Pitt, BYU and Tulsa are among the schools in pursuit. He was a MAC All-Freshman Team performer this season, averaging 6.6 points and 5.3 rebounds. Before playing at EMU, he spent a year at DME Sports Academy. He has three years of eligibility left.

Dorsey entered the portal on April 22 after averaging just 6.4 minutes per game this season in Nashville. He saw action in 22 games for Vanderbilt, though only played 10-plus minutes on three occasions. He was a three-star prospect out of prep school in Pennsylvania who held an offer from the Hokies.

As of now, Virginia Tech has lost six scholarship players from its 2021-22 ACC Championship team. On top of that, three of the six were starters – two in the backcourt, one in the frontcourt. However, there is plenty of depth at guard on this team.

Sean Pedulla, Hunter Cattoor and Darius Maddox make a solid backcourt trio. That doesn’t even take into account the talent that Rodney Rice and MJ Collins provide. The Hokies are set there, even if Cattoor decides not to use his COVID year of eligibility next season. Every other guard has at least three years of eligibility remaining.

In the frontcourt is where it gets tricky. Three of the four veterans have departed, and there’s a good chance Mutts doesn’t return. Tech will have gone from two really solid frontcourt starters with decent depth to a group of four players with 18 total Division I appearances (17 from Lynn Kidd, 1 from Camden).

That’s the main target this offseason for Tech, and the aforementioned list, which features five players 6-8 or taller, proves that. The good news is that three scholarships remain and immediate playing time can be appealing. Hitting on a player with the experience and of the caliber of Basile, Osunniyi or Poteat is crucial to the Hokies’ success next season.