The Hokies are coming off a huge 5-2 non-conference win at No. 14 Tennessee on Wednesday, and they’ve won 22 of their last 25 games. They have won all six of their ACC series this season and swept Clemson, Syracuse, Pittsburgh and North Carolina.

The Cardinals have won five of their last six ACC games, sweeping Syracuse and winning two-of-three against North Carolina. Their two biggest wins of the season were against No. 6 Arkansas and No. 17 Clemson. In both cases, Louisville won one game in a three-game set.

With a RPI of 39 and a strength of schedule of 20, the Cardinals are squarely on the NCAA bubble. Extra Innings Softball listed Louisville in its “Last Five In” on this week’s bracketology. The Cardinals are desperate and could use a win (or two) in Blacksburg this weekend.

The Cardinal that most likely will have an impact on the team’s success this weekend is All-ACC Selection Taylor Roby, who is a factor both at the plate and in the circle. Just like last season, the redshirt senior leads Louisville in home runs (14), and she is second in RBIs (41). Roby also leads Louisville in games started in the circle (21), innings pitched (129.1) and strikeouts (99). She has an ERA of 3.03, but pitched all eight innings in the Cardinals’ 4-2 over Clemson.

Louisville is 11th in the ACC in ERA (4.26) and part of that reason appears to be the current lack of a second starter. Graduate student Chardonnay Harris is second on the team in starts with 14 but has not played since March 27 and is no longer listed on the Cardinal roster.

Since her “departure,” the second starter spot has been filled by freshman Sam Booe (7.70 ERA), junior Taylor Felder (2.80 ERA), and junior Payton Hudson (11.45 ERA). None of the three have started more than two games this year.

Louisville is fourth in the ACC in batting average (.296) and is led by graduate student Carmyn Greenwood (.413, 12 HRs). She led the Cardinals in hitting last year (.430) and was a Preseason All-ACC Selection this season. Graduate student Kendall Smith (.331), sophomore Vanessa Miller (.321) and freshmen Korbe Otis (.320) and Ally Alexander (.307) round out Cardinals hitting over .300.

Virginia Tech head coach Pete D’Amour feels his Hokies will be ready for the challenge.

“We face another test this weekend against a good Louisville team,” D’Amour told Tech Sideline. “Their pitchers will keep them in the game and their offense is much improved. Nothing changes from our prospective. We need to work ahead more pitching wise and we need to control the strike zone on offense. Our practice today was intense. We’re as prepared as we’re going to be.”

The Hokies played to capacity crowds last weekend vs. Virginia and D’Amour hopes that continues.

“We hope to see the stadium packed again like last weekend,” D’Amour said. “Our players really fed off the atmosphere.”

Here is the tale of the tape, accompanied by the individual statistics. 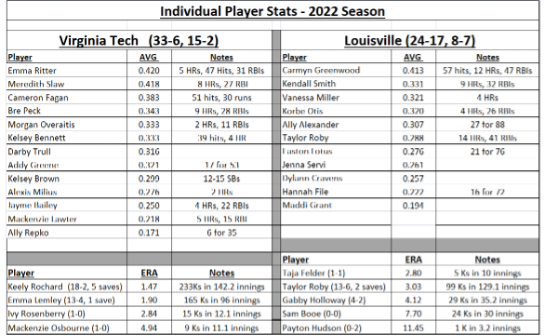