It wasn’t a dominating series like the last several years, but No. 2 Virginia Tech (32-6, 15-2 ACC) recorded a point in the Commonwealth Clash with a series win over Virginia (23-21, 9-9) over the weekend. The Hokies clinched the series with an eight-inning 5-4 thriller on Saturday afternoon.

“We were fortunate to win the series the weekend against the toughest Virginia team we’ve faced since I’ve been at Tech,” Hokies head coach Pete D’Amour told Tech Sideline. “We played well the first game of the series and then got punched in the nose game two. Today (Saturday), we did just enough to win. The character of this team is to fight until the last out, and we did that all weekend long.”

Mackenzie Lawter sent the capacity crowd home happy on Saturday with this walk-off single to center field that scored pinch runner Maddie Federico, who was running for Morgan Overaitis.

Lawter’s RBI was the only Hokie run of the day not driven in by designated player Meredith Slaw, who continued her blistering hot hitting with two home runs and a 2-RBI single in the game. In Slaw’s last seven games, she is batting .609 (14-for-23) with five home runs and 14 RBIs.

D’Amour points to her as the perfect teammate.

“Meredith’s role wasn’t as prominent after the first month as she probably felt it should be,” D’Amour said. “But she continued to work and cheer on her teammates and that earned her more chances. She was ready when her chance came again. I could say the same about a lot of our kids. We have a lot of very talented players. Playing time is hard to come by.

“Meredith is setting the example to always be ready when called on and we’re after one thing when you really get down to it: winning softball games as a team.”

Keely Rochard (18-2) was again in warrior mode in the circle on Saturday. Although she was not as dominating as she sometimes can be, she threw 148 pitches and limited the Cavaliers to one run over the last five innings.

“I felt like I had only thrown about 60 pitches,” Rochard said after the game. “I just think I get stronger as the game goes on.”

Barring a showdown at the ACC tournament, Rochard finished her career against UVa with a record of 8-0, a 0.625 ERA and 76 strikeouts in 56 innings. Her resume against the Cavaliers includes a no hitter and three one-hitters.

Saturday’s win followed a 5-3 Virginia win on Friday night in which Cavaliers snapped the Hokies 13-game winning streak in the series. UVa starter Molly Grube outdueled Tech’s Emma Lemley, scattering eight hits and walking none. But the bigger story may have been that Lemley was called for no illegal pitches, although it appeared that the UVa staff was in the umpire’s ear on several occasions.

“I’m proud of how Emma battled through a tough week and competed in game two,” D’Amour said. “She didn’t have her best stuff, but I didn’t expect her to after what she was put through last week. It’s a big deal that she wasn’t called for one illegal pitch on Friday. I see no reason what that won’t continue.”

Although the Hokie offense struggled at times in the series, the team still recorded 30 hits. Cameron Fagan hit .500 (6 for 12), Darby Trull recorded four hits and Overaitis was 3-for-3. Virginia Tech now has eight players hitting .321 or better and a team batting average of .325. 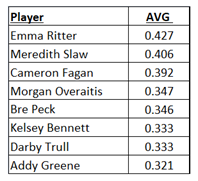 In spite of the Friday night loss, the Hokies’ RPI remains strong and potentially puts them in a strong position to host NCAA Regionals (Top 16 Teams) and Super Regionals (Top 8 Teams). As of Monday, April 18, the ACC holds down four of the top nine spots: 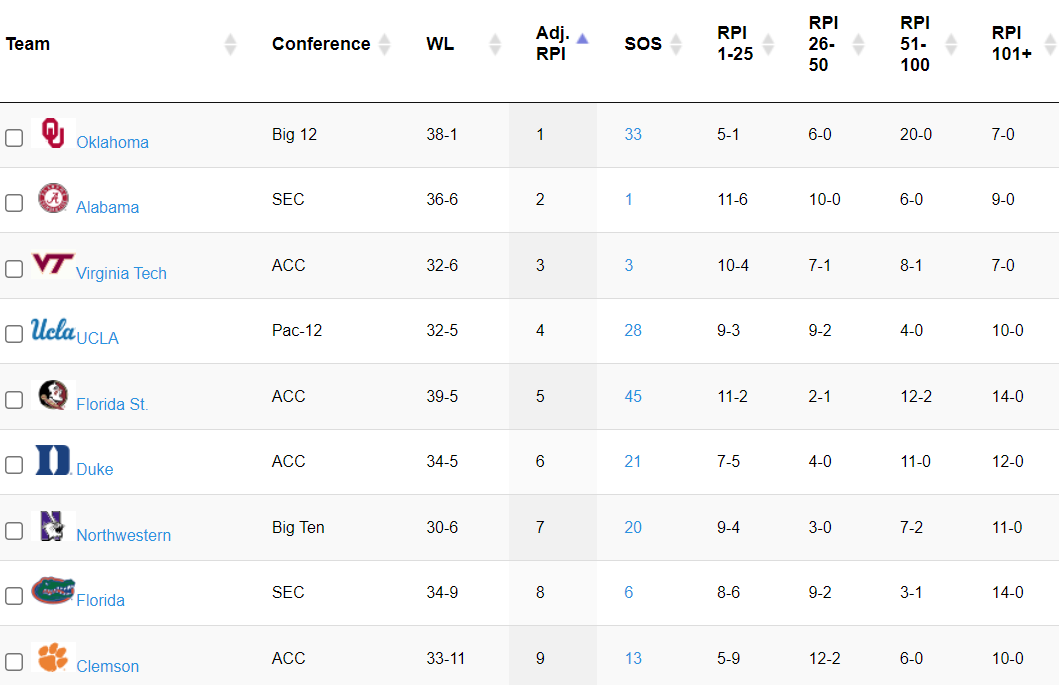 The three games were watched by the biggest crowds of the season and D’Amour took notice.

“The fan support was unbelievable this weekend,” D’Amour said. “We had to have had 2,000+ fans for each game of the series. The environment matched the best venues we’ve played in this year. I’d like to thank everyone for coming out on behalf of the players. They noticed the crowd and were very appreciative.”

Next up for the Hokies is a midweek trip to No. 14 Tennessee on Wednesday followed by the final home series of the year against Louisville. That three-game series starts on Friday with first pitch at 6 p.m. at Tech Softball Park.