No. 2 Virginia Tech softball hosts Virginia (22-19, 8-7 ACC) in a three-game series this weekend starting on Thursday. Because Sunday is Easter, the Commonwealth Clash will start on Thursday.

The Thursday and Friday games are both scheduled for 6 p.m. and will be streamed on ACC Network Extra. Saturday’s game is scheduled for 2 p.m., but because of the Spring Game on the ACC Network, there will be no broadcast.

The Hokies, 30-5 overall and 13-1 in the ACC, have won 19 of their last 21 games. UVa is much improved this season, posting an 8-1 record in their first three ACC series, the best start in program history. That included taking two-of-three games from Notre Dame and sweeping NC State and Boston College. However, during the last two weekends, the Cavaliers were outscored 49-9 by Florida State and Duke.

UVa has struggled at the plate and is currently last in the ACC in batting average, hitting just .249. On the flip side, Virginia Tech is batting .324. The Hokies also lead the ACC in ERA (1.77) while UVa is eighth (3.67). The two teams are at the opposite ends of the ACC rankings in strikeouts; VT is first with 385; UVa is tied for last with 184.

However, this Virginia team is much improved over last year’s edition.

Senior Tori Gilbert leads the Cavaliers in batting average (.286), home runs (10) and a run scored (30), while junior Katie Goldberg leads the team in RBIs (27) and is second on the team in home runs (7).

Defensively, the Cavaliers are solid, ranking second in the conference in fielding percentage (. 977). Sophomore Leah Boggs leads the ACC in runners caught stealing (12) and should be a challenge for the Hokies base runners.

Virginia Tech has enjoyed a lot of success recently against their in-state foes, having won the last 12 games and 17 of the last 18. However, that won’t change the team’s preparation.

“We’ve had the same preparation level for this weekend as we have had for every opponent all year,” Tech head coach Pete D’Amour said. “Virginia has had a good season. They have a lot of different pitchers and have added some depth to their lineup.”

The Hokies are looking forward to playing in front of their fans this weekend. They’ve been road warriors so far in 2022, playing 28 of their 35 games on the road.

“The weather looks great,” D’Amour said, “so our players are looking forward to playing in a packed house all three games. We hope to see everyone there.”

Here is the tale of the tape, along with the individual stats. 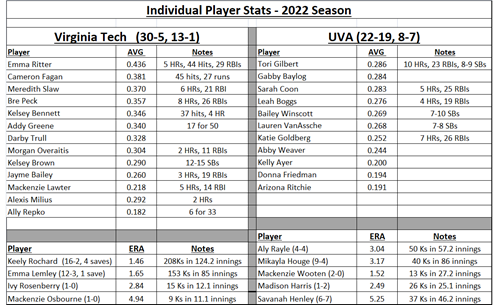